Three hundred sixty-four days after my brother Kyle’s previous saddle incident while pulling bulls, he and I once again found ourselves headed out bring home the last of the bovine males for the year. We had discussed trailering our horses and selves the three miles to the pasture we needed to cover, but he wanted to ride as our geldings were fresh.

I agreed, and we headed out. Unsurprisingly we found the whole works at the water tank on the far side, proceeded to cut out our bulls and head for home. Then I made a critical error in not keeping right on one two-year bull as he jogged down the trail. I caught up just as he went around a severe cutbank at the head of a draw, right off the trail, and off the side into the bottom.

I caught up with him two thirds of the way back to the cows, and the fight was on. After some coercing, I managed to get him eased back out of the nasty draw and onto flat ground, so we could instill a little rawhide respect into his thick scull.

Neither my brother nor I are ever going to win money at a roping, but we lined the bugger out and after what felt like three miles of running him in big circles across a prairie dog town, and flat running him over once when he stumbled, we managed to get a loop on him. 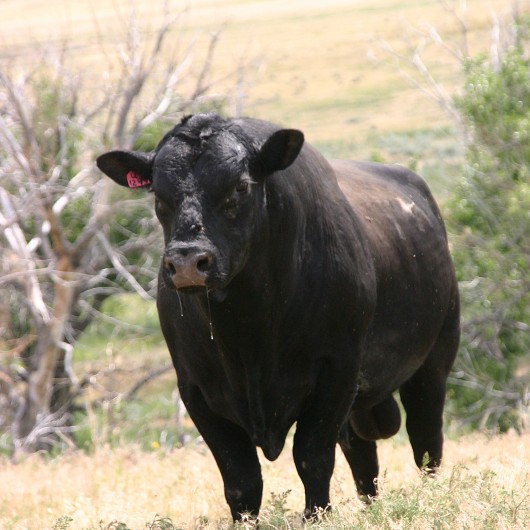 Perfect, we thought, as we set into the task of choking him down then giving him air in the way we had been taught to do. Things were finally going according to plan b, until we unknowingly reached the pinnacle of our day and things slowed to the point seconds seemingly took minutes.

My brother was adjusting his dally while I provided a distraction, until the bull suddenly whirled and lunged at my brother. I yelled, my brother and his horse took a giant leap in response as the bull simultaneously turned back the opposite direction to lunge at me. Things came tight in the blink of an eye, accompanied by a sound as if a large caliber rifle had been fired. The bull flipped over backwards, my brother’s horse sat completely down and nearly went over backward before regaining his footing.

Fortunately, this took enough air out of the already half choked bull to provide the chance to see what other damage had been done, and it was impressive. Folded into my brother’s lap was his horn and half the swells of his saddle, with the rope still attached to the bull stuck in the mix. I learned in that instant why you should always carry a knife when you ride, as I didn’t have one and that rope needed cut.

Over the course of the next several seconds, we managed to get the rope undone, and move a few feet away from the bull. Kyle assured me that all necessary equipment had been missed, but he was turning an ashen grey color and obviously attempting not to lose his breakfast as he occasionally spit off the side of his sweating horse.

There is no cell service where we grew up, so calling for help wasn’t an option, and no one would be looking for us for several more hours. So, we began what would be a long, slow ride back home, stopping only to grab Kyle’s hat in the middle of the prairie dog town where he lost it in what seemed to be a day ago chase leading to the current moment.

As we rode, he continued spitting occasionally, and began to weave a couple times, but managed to stay on his equally exhausted horse for the four mile ride back home.

A couple days of wearing gym shorts later, Kyle showed me what was a truly impressive bruise right where his thigh and pelvis came together. He took his saddle to a saddle maker, who said the grain in the wood was running the wrong way, which explained why it broke and folded back into his lap. He put a new tree in the saddle, and when Kyle picked it up informed him that if he ripped the new tree out he was just too rough on equipment. Kyle replied he never intended to rip the first one out. Fortunately the saddle has lasted several years without another major incident.

We left that bull laying right where the event took place, rope still on him. Brothers rank above bulls. He managed to get it off and was later gathered and sold. The horses nickered at him when he was loaded on the trailer.