Saddle Up and Dance; Historical Recreation

From the time adventurous folk began settling the Western prairies, through the homesteading era and beyond, all craved to occasionally see and talk to other people. They survived the solitude, yet once in a while longed for fun and entertainment. Dances were favored in these pursuits. We’ve all read stories and seen photos of trail and roundup cowboys (hopefully the more graceful of the cut) designated to stand in for the lady partner on a dance floor . . . even a wagon fly spread on the ground. As soon as anything resembling a community developed, people found someplace to gather and dance. Anyone who could play a mouth harp, autoharp, fiddle, guitar or banjo was popular. Also piano players, but few pianos resided in prairie homesteads or dugouts….
Both my parents recalled remote homestead houses – usually 14’ x 16’ – where dances were held during their youth. The arriving crowd helped move furniture outside, clearing the dance floor. Beds were often permanently connected to walls and floor; and stoves were essential for cooking, even in summer. Other than that, the entire area would be wide open for a rompin’ stompin’ good time to be had by all! The North bank of Black Thunder Creek southwest of Newcastle, WY held a home my maternal grandparents purchased and “added-on-to” after selling the homestead. Mom said they “hosted dances at times, in the added-on screened-in porch which ran the full length of the south side of the house.” That porch can be seen directly behind the car, my grandmother, great aunt and Mom’s brothers in this photo. 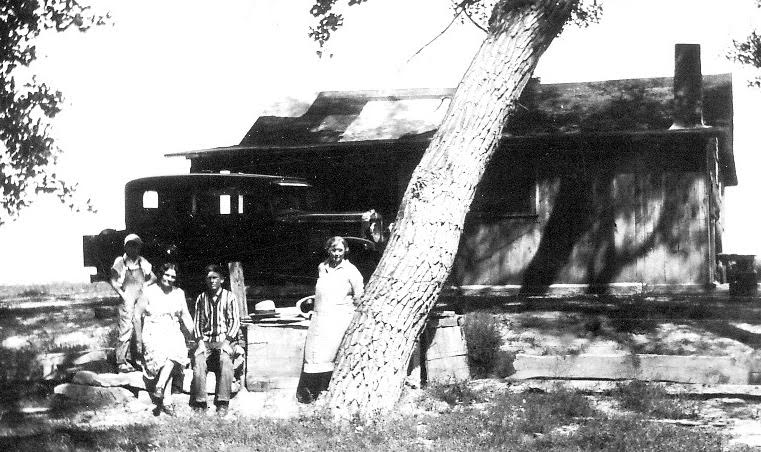 The ‘pony-track telegraph’ was amazing for publicizing all local gossip and upcoming festivities! Rural mail carriers, wandering cowboys, “the Raleigh man” making his rounds, itinerant ‘grub-line riders’, homesteaders going to the Post Office, a visitor at school and the tales students spilled when they got home spread news of all kinds. Town populations grew and newspapers were established, hopping right on the publicity bandwagon.

Here’s an early item from my maternal grandparents’ community:
News Journal – March 04, 1915 – A social dance was given at the Hampshire Hall Saturday night last week in honor of Mrs. Roy Young; who departed for the home of her parents at Fremont, Neb. to spend the winter. A delicious supper was served by the ladies at midnight and breakfast in the morning. All present expressed themselves as having had the time of their lives.

Several attended from the Cheyenne River country, and had some experience in crossing the River. (In that region the Cheyenne, lazy and shallow except when flooding, is normally easy to cross; but conceals lurking quicksand in places known only to the natives.) 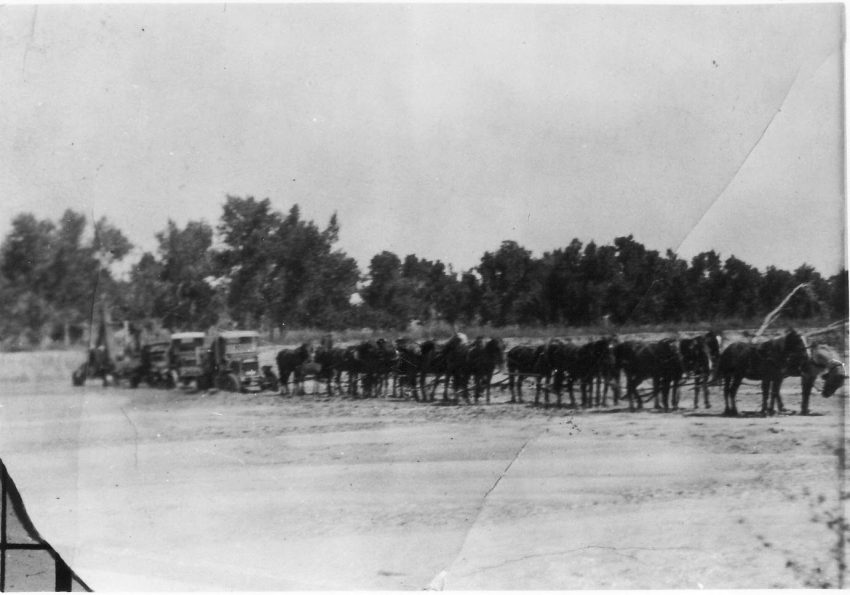 When the Cheyenne River decided to stop modern autos from crossing — to carry their passengers to dances or anywhere else — some REAL HORSEPOWER had to be employed. (Photo provided by the author, from her father Francis Sedgwick’s collection)

Opinions as to the desirability of countrified community celebration seem to have varied among people, as shown in this “News Journal – March 04, 1915” piece in “Fiddler Creek News”. The “School Board of District No. 1” is called into question, with the writer apparently not favoring rural dances . . . at least not their affect upon ‘school mar’ms.’ He – or she? – wrote, “For my part I am glad we have a board that is looking after the rural schools a little, for in some cases they certainly need looking after . . . I have known several teachers that would dismiss school at 2:30 and 3 o’clock, and one teacher as early as 2:00 o’clock p. m. for the purpose of getting ready for a dance . . . What are our schools for? Is it for the benefit of the rising generation, or for the purpose of writing out a few checks for our ‘over worked’ teachers? I say School Board and Superintendent also, wake up and look after our rural schools so as to get best results.”
Apparently undaunted, the newspapers continued advertising dances! As the world went to war and America was swept into it, dances became military fundraisers.
News Journal No. 40 – March 08, 1917 – “We are enjoying a great many dances around Hampshire of late. There was one at Mike Coy’s last week, and this week Jess Baker had one.
News Journal – April 26, 1917 – The dance at Ft. Lee, at which Tommy Bruce acted as host, was a success, considering the inclement weather. About thirty attended and after the usual midnight supper, danced until 6 a.m. We, too, have the dancing craze, but we often think that if we were forced to work as hard as we dance, we would think this a cruel, cruel world. We’re
believers tho’, in the proverbial saying, “All work and no play makes Jack a dull boy” so here’s to the dance.
Weston County Gazette March 01, 1918 – Saturday night, March 16, Mr. And Mrs. A.D, Flores are giving a Red Cross dance. People begin to sit up and take notice when they hear of a dance at the Flores ranch, for it always means a good time for everyone who attends. So we are hoping that a large crowd will be at this one, as the proceeds go to the Red Cross.
NEWS-JOURNAL May 30, 1918- Mr. And Mrs. Coy will have their Red Cross dance Saturday, June 8th, and we believe that this will be “some” dance as the Coys are going to make every effort to make it a success. We heard Mrs. Coy say that there would be mutton and ham sandwiches, cake and ice cream — and if possible, musicians from Newcastle. Now, I know you’ll come, with so many good things promised you. And say, don’t forget your full purse and help Hampshire to live up to its slogan, “Give, then give some more.”
News-Journal No. 8 July 25, 1918 – HAMPSHIRE – The dance at Ft. Lee the 17th was well attended about 50 being present. The music was good and was furnished by the Lees, Mrs.Williams and Mike Coy. Mr. Coy is getting a reputation as a first-class fiddler for quadrilles, when he gives you the ‘Arkansas Traveler.’ Well you’ve just got to dance whether you want to or not. Your feet absolutely refuse to keep still. A delicious supper was served at 1:20 o’clock, consisting of cake, ice cream, sandwiches and coffee. Dancing continued until the ‘wee small’ hours of the morning. The occasion was a farewell to Roscoe Flores, who left for the colors Friday.
News-Journal May 29, 1919 – A social dance was given at Fort Lee Saturday. About 160 happy people congregated from near and far. So many of the boys were there in uniform and others were so aggressively well dressed that the affair looked like a military ball. There were several musicians – and the music was exceptionally fine. There was a piano, several violins, mandolin,
flute, guitar and piccolo. Among the musicians were George and Ramon Lee, Ray Starling, Mrs. Frank Zerbst, Mrs. L. K. Williams, Campbell and Marion Scott, Mr. Neleigh and others. A buffet supper consisting of all kinds of appetizing things almost better than mother used to make, and gallons of hot coffee, was served at midnight. Dancing was kept up until morning.

With population increases, rural Post Offices were established. Entrepreneurial postmasters sometimes started a general store, of whatever tiny proportions they could manage in available space. Enough cleared floor would qualify as a “dance hall” and once the news was out cowboys, homesteaders, trappers, moonshiners, and grubline riders would shave, spit-and-polish, saddle their best horse, and head for the “bright lights”. Whether candles, simple kerosene lamps, or the brilliant glow of white gas ‘lanterns’, conviviality was assured. 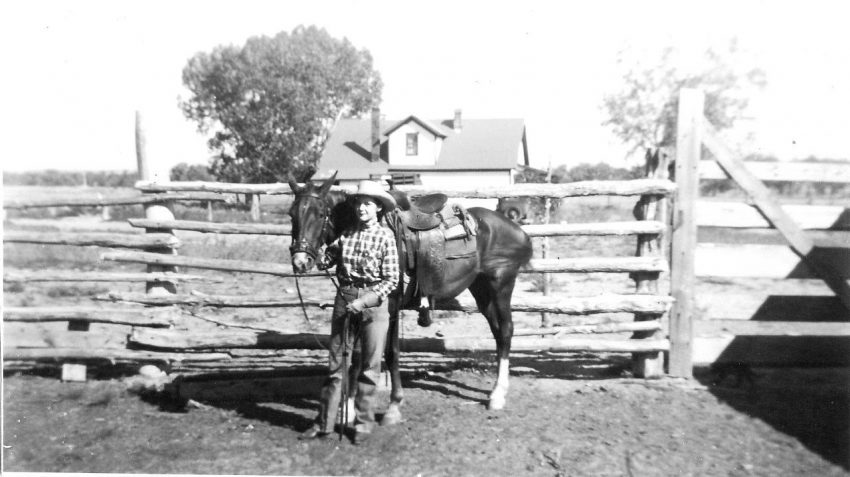 My mother, Violet Coy Sedgwick, is ready to go with her nice horse and saddle. The round corral she’s standing in is about 15 miles from Clareton, where she sometimes rode to dances.

Nearly all celebrants arrived by horse, whether saddled or harnessed. Some girls tied dresses on behind their saddle to change into, and horses were tied to hitching posts, staked or hobbled nearby to patiently await the end of the dance, perhaps at daylight! Many ranchers told their youngsters they could “stay as late they pleased at the dance” — but they’d better be ready to “take a’holt” when the next day’s work began on the outfit, with “no groans or complaints!”