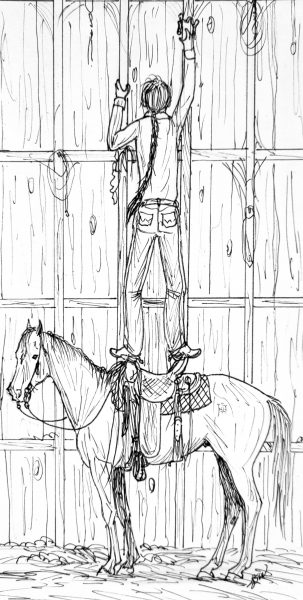 Where I grew up, my family’s ranch was side by side with my Dad’s brother Keith’s ranch. They were separate ranches, but we neighbored back and forth, especially as the kids grew up, left home, and the work force on each place got smaller. When I was in high school, my Dad loaned me to Uncle Keith to help with things when needed. I enjoyed it as I thought so highly of my Uncle and Aunt.

I’d been over helping Uncle Keith with some project and we were done. I was getting my saddle horse ready so I could ride back home. We were in the barn where there were a couple of tie stalls and an open area. Leaning on the manger while I bridled my horse, Uncle Keith told of how there had originally been a hay mow in the barn. While looking up at the tall roof and walls, envisioning how it had been, I could see some scraps of old harness and other items hanging on nails, accessible back when the haymow was in place.

Studying those items in the gloom, I saw what looked like a bit hanging on a nail. It was way up there high and covered in decades of dust and cobwebs, but it sure looked like a bit. I asked Uncle Keith. He studied on it but said he sure didn’t know anything about it. He hadn’t hung it there but someone long before him. Grinning at me, he said I could have it if I could climb up there and get it. He knew I was a bit spooky about heights and also that I wasn’t a monkey, but I took the challenge.

My horse was a nice gelding that was rock solid with me. I’d never had occasion to do something silly on him like stand up on my saddle, but I figured he’d done everything else I’d asked without turning a hair, so why not this? I stepped up on him, turned him around and side passed him up to the barn wall, hung my reins on the horn, and proceeded to stand up in my saddle. Rebel watched me close, but never moved. I got up in my saddle okay and had a hand on the wall but couldn’t quite reach that bit, stretch as I might. Finally, I put a foot on the saddle horn and one on the cantle and got a little higher. Rebel had his head turned watching this nonsense, but not too concerned. By stretching every inch I could, I finally got ahold of one ring on the bottom of one shank of the bit and lifted it off the nail.

Pulling it out of the cobwebs, dust and crud cascaded down on me and into my eyes, but I kept a hold of it and carefully climbed back down and settled in my saddle. I stepped off and cleaned my prize a little. It was a very short shanked iron bit with a relatively high port. I stepped over into the brighter light at the door and rubbed it some more. Finally, on the inside of one shank, there was an anchor maker’s mark.

I tried to give it back to Uncle Keith, but he said a deal’s a deal and I could keep it. When I got it home, I washed it off at the hydrant and it was in good shape. The bit was straight and for several years, I rode a little mare that really liked it. It had a sweet mouth and really fit her. It was a too narrow for bigger horses with wider muzzles, so I finally hung it on the wall.

It is a unique bit, doubtlessly a collectible, but it’s not for sale or trade. I’ll treasure it always as a great memory of Uncle Keith and I being together and me standing up in my saddle for the only time ever, using my horse for a ladder.