Raising kids on a ranch is, to me, the perfect environment. They learn so much about the lifestyle, the facts of life, responsibility, and reality. I’m sure glad I got to raise my son the way I did. I worked outside always and as soon as he was big enough to go in a backpack he went with me. Once he got to traveling on his own it simplified my life in some ways but complicated it in others.

When he could travel he became surprisingly fast and hard to keep track of. I’d be in the middle of something and he would vanish. I spent some frantic moments looking for him amongst the livestock, equipment, sagebrush and other perfect hiding places.

Working cattle was especially nerve wracking. He was absolutely fearless and would boldly walk right into a bunch of cattle. Nothing bad ever happened, but it was just a matter of time until he, at the least, got run over. Tying him to the fence came to mind but knew he’d object loudly to that. But then I thought, if he was on a horse that was tied to the fence, he would be absolutely content and still out of the way.

I tried this out the next time I was out at my folks helping my Dad work cows. I had gotten off of Kelly, my bullet proof, time tested saddle horse, and tied him to the fence near where we were working the cows down the chute. I put my little son, who was about two, up on Kelly, and he was perfectly content for hours. Kelly watched him out of the corners of his eyes, but was relaxed and comfortable as well. Colin would play with the saddle strings, the tail of my rope, the latigos, and anything else he could reach. He spent a great deal of time petting Kelly and combing his mane with his little fingers, which Kelly enjoyed. Perfect match. Colin was safe up there with a grandstand seat to the job being done. 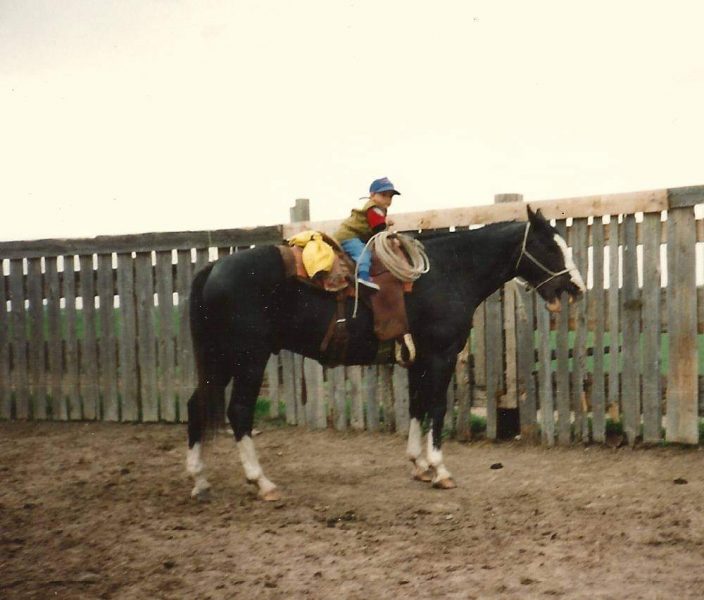 Kelly kept Colin safe, but thought it a boring job.

Years later, when Colin’s own boys were little and underfoot, the same worry was looming. They were big enough to move around but too little to be running loose and we had cattle to work, so, two well broke, super reliable saddle horses were trusted with babysitting the little guys. Rush and Lakota were tied to the fence near the crowding pen and alley, and the grandboys entertained themselves the whole time we took working the cattle.

It turns out that a good idea is really quite timeless. 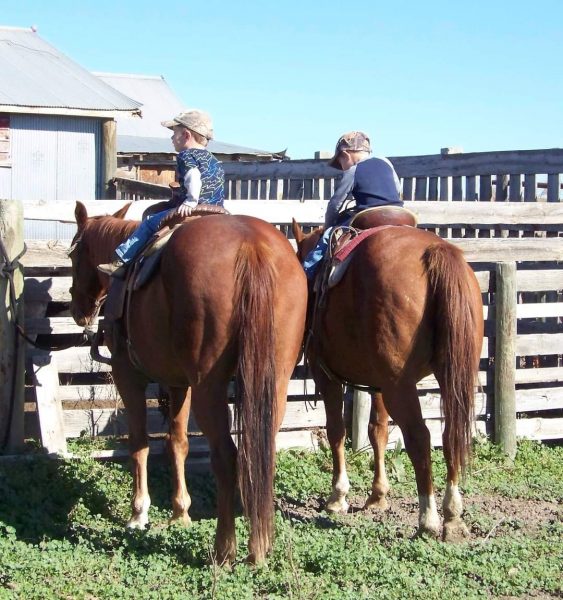 Lakota and Rush take care of the next generation.