The cavvy on the New Mexico ranch I was on numbered around 85 head of geldings with some studs thrown in. Catching a horse out of the milling mass every morning could be a challenge if the horse didn’t want caught. I’d gotten my string to where they’d stop and turn toward me without much trouble, so I could get saddled pretty quickly and out of the way.
The foreman, and I use the term loosely and will call El Bravo, wanted everyone to think he was quite a hand. None of us did, but he sure wanted us to. So, he thought it was the cowboy way to rope his horses out of the bunch, often causing a wreck for the rest of us. Not that roping one out was the issue, but the fact that he had no skill was. He’d hit us with his loop as he swung and swung, spooking the horses into a packed bunch in the corners to avoid him. Apparently he had never heard of a hoolihan or horse loop with one swing.
I’d seen him throw a dozen loops before even touching one of his horses, then he was as likely to hit them in the eye if he did finally catch one. It was terrible, I promise you. Most of the cavvy hid their heads when they saw him step out toward them and I didn’t blame them a bit. On the mornings he was saddling at the same time as we were, we’d all hurry to get our horses caught before he messed up the whole deal for us.
In his string was a very good gray gelding that was outstanding in spite of the gunsel who pulled on his head too hard and spurred him too much. The horse was called Roy. We all wished we had him in our string. Roy was a good looking, keen headed, easy moving horse who was handy at everything. I don’t know who’d had the horse before El Bravo came, but he was a good hand with a horse.
When El Bravo would come out of the saddle shed with his rope in hand, Roy would be watching from wherever he was in the bunch. When El Bravo paused, looking for his victim, Roy would walk out of the bunch and stick his head through the loop, thus, if it was his turn, he wouldn’t have to get his eye hit or ears zinged getting caught. If he wasn’t needed, the loop was removed and Roy would walk over by the horses being saddled, where it was theoretically safe. 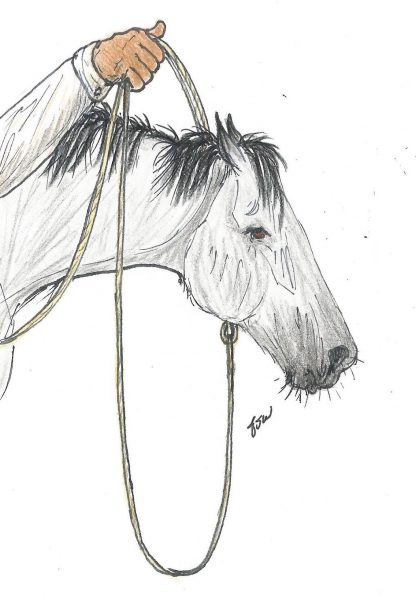 Overall, that ranch had really exceptional horses with good minds, but I still contend that Roy was the smartest of the bunch. He’d figured out how to survive being in El Bravo’s string. He was certainly smarter than El Bravo.