We’ve been living in Arizona for nearly a year now, and I’ve noticed a few differences in the way cowpunchers approach roping compared with the buckaroo style.

But, here’s one thing these ropers have in common: Build a loop. Hold it at the ready. Keep your reins short and look to the boss for the cue to commence roping. Stormy Manns, shown here at the Encino corrals of the O RO Ranch in northern Arizona, waits to ride into the herd. 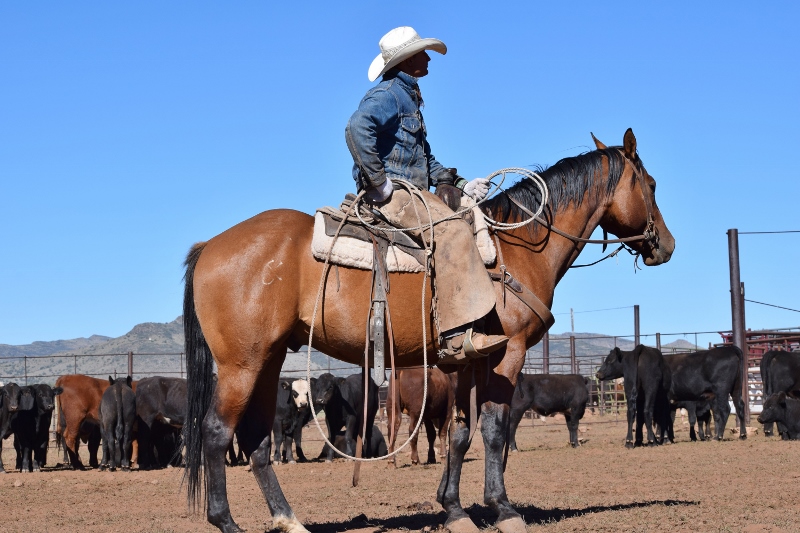 See that stuff on Stormy’s saddle horn? Up north, they call that “black mulehide” and no one would use it. Down here, it’s just plain rubber and most cowboys use it.

Hey, is that a cowpuncher NECKING a calf to brand?! Yes, it is. They usually heel and drag the calves to brand, but this day the crew decided to head and heel them because 1) they were huge and 2) okay well maybe there was really only one main reason. 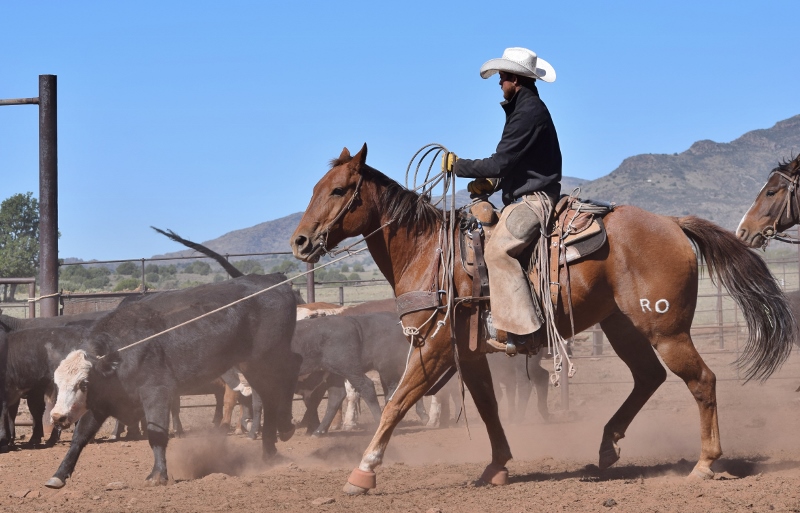 Chase Pope did neck a big calf on a good RO horse, though!

Here, Stormy has a calf necked with a good short handle while Jim Young comes in for a heel shot on his giant roan horse Snoopy. This is the standard method for branding calves up north – except for the ranches where they heel and drag. There are some of those even in the middle of head and heel country. 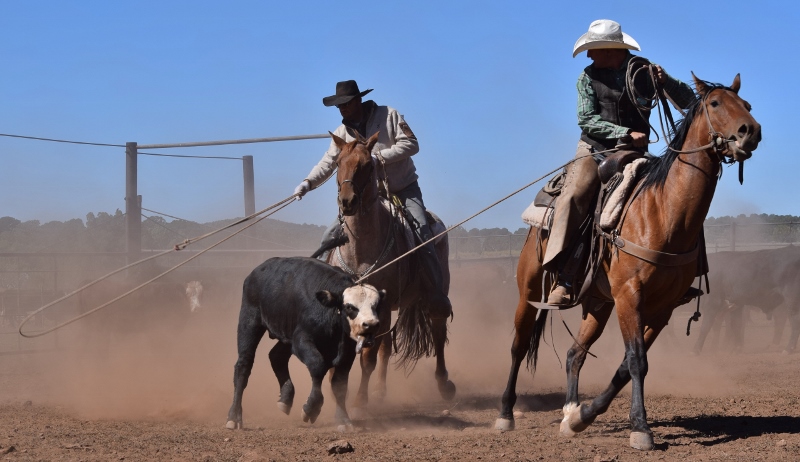 Picking up two feet is a vital skill regardless of which roping style is used. 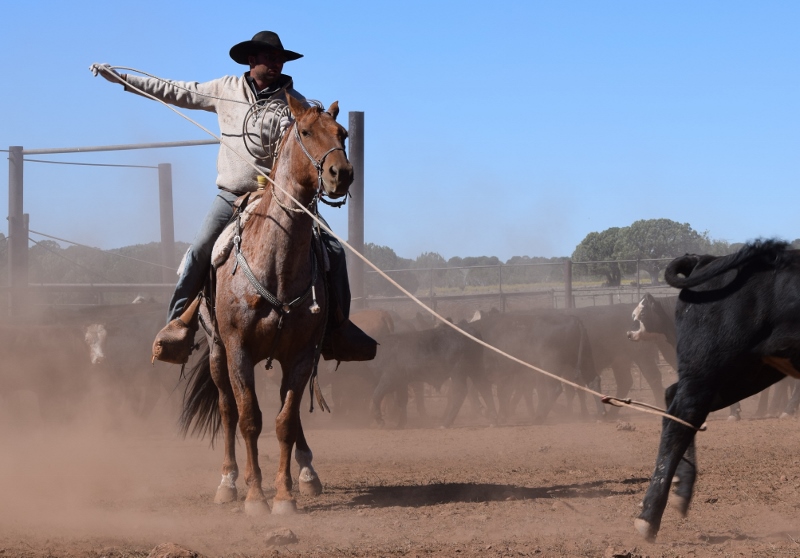 When the calves are being only heeled, though, the roper doesn’t have the header to help him set up his shot. He must ride into the herd, set up his own shot, and rope two feet. 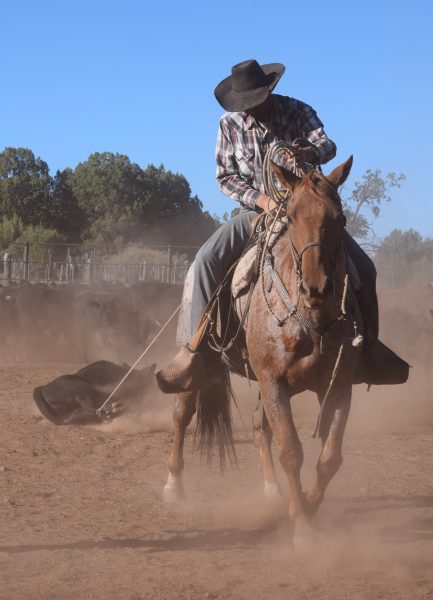 Then, when he brings the calf to the fire (which, incidentally, is not called “the kitchen” like it is up north), an energetic member of the ground crew rushes over and holds up a front leg while the calf is branded, ear marked, vaccinated, etc. 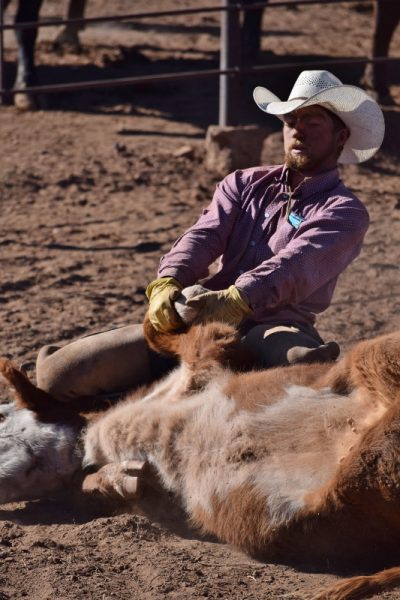 I haven’t actually performed this part myself, because I am on semi-permanent baby-watching, cookie-bringing, picture-taking duty. It’s not too bad, but after a long day of watching these guys wrestle (proper local term: “wrassle”) big calves, I am WORN OUT with sympathy soreness.

And then I think of the way ropers up north work the ground, which involves a whole lot less manual labor. These guys down south tie off to their horses and doctor/tie up/otherwise work cattle, but using two ropes to hold a calf at a branding isn’t standard procedure. 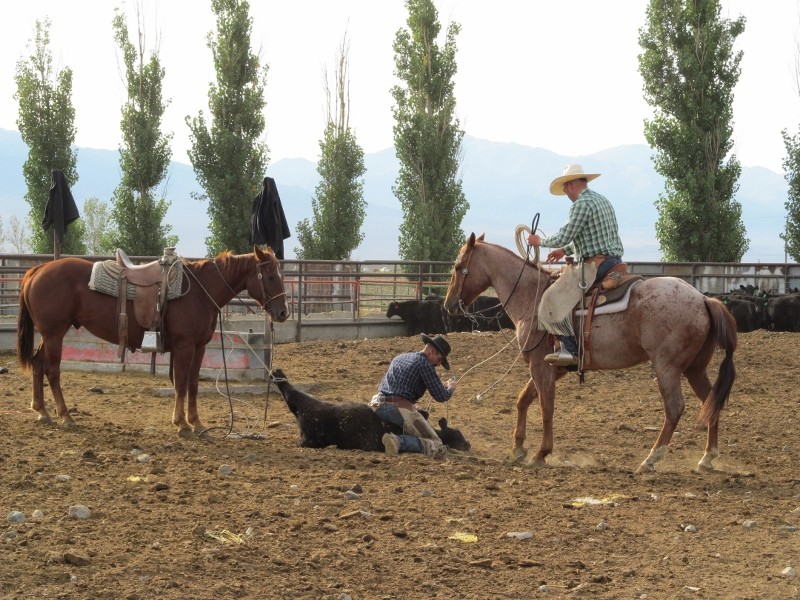 But, horsemanship is always valued no matter where a cowboy works. Here, Jim gives Colten’s horse a reassuring rub on the forehead to help him learn that standing close to the branding commotion isn’t such a scary notion. 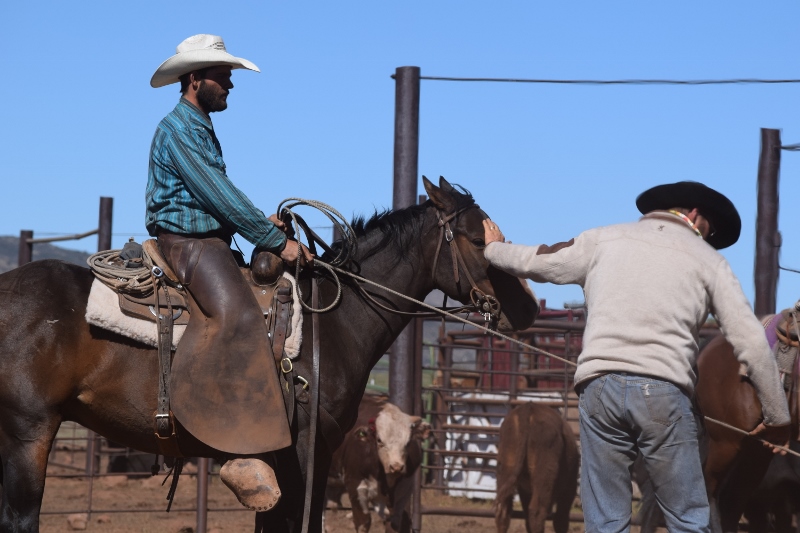 And of course, ropers from the north, south (and presumably east and west) all like to show off a few tricks now and then. Here, Chase does the butterfly at the Triangle N camp of the ROs. 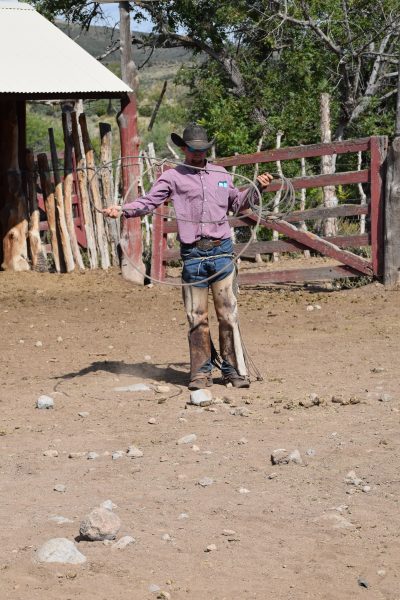