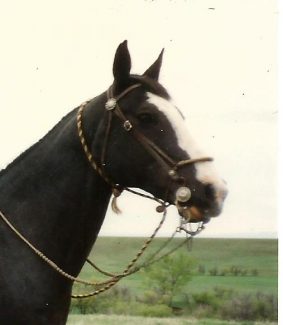 The folks I was running some share cows for had gone to a registered sale back in feedlot country and brought home some corn fed, bedded in good hay, bred heifers. Bad enough that they were pampered and unfit to live in the ranch environment they were brought to, but they were also bred to calve over a month earlier than the rest of cows and heifers I was running. Consequently, the spoiled princesses were in the corral at my place to calve.

The first one to calve was the one that was the one I liked the looks of the least. She had a gnarly head, eyes were too close together and a sworl at just below the poll on her head. That usually indicated a bad attitude to me, though I’d sure seen my theory wrong. Well, in this one’s case, I was not wrong.

She was walking the pen, getting ready to calve, and, afraid that the high dollar heifer might have trouble, I kept a close watch on her. She finally laid down and set to having her calf. With no trouble she birthed a nice sized calf that started shaking his head and trying to get up right off. I was pleased.

The heifer got up and started sniffing and licking the calf as he struggled to his feet. As soon as he stood though, her brain exploded. She threw him about five feet with the first swat, then mashed him on the ground while screaming at him. Oh boy. I went in the pen to try to rescue the calf and she came at me with the same intent. I retreated quickly.

I needed a horse immediately! The only two in the corrals were a four year old green broke stud that I knew wasn’t ready for the job at hand. The other was my 27 year old retired gelding that had done every job a saddle horse could in his long career. Kelly was stove up, hadn’t been ridden for over three years, but he was the best choice.

Running to the house, I got my boots on and then caught Kelly. Saddling as fast as I could, I could hear the maniac heifer still screaming at her calf, only now I heard another one bellering too. I led Kelly out the door and stepped on him, knowing the calf might already be dead. We stiffly trotted back over to the corral and went in the pen. The calf’s mother was still belting him around and her half sister was now helping her, but the calf was alive.

I ran the other heifer out of the pen, opened the calving shed door, rode back and positioned Kelly over the calf. Mind you, he hadn’t had a saddle on him in years, but, he was so solid I never doubted him. That crazy heifer set in to butting him but he just hunkered down and held himself over the calf. When she got around to the front of him, true to his usual response, when she belted him in the chest, he squatted down. She backed up and when she did, he grabbed her by the top of her head and bit down hard. She let out a beller and backed across the corral shaking her head, while black hair drifted across the corral. She had backed toward the barn, so Kelly and I bore down on her and proceeded to put her in the shed and shut the door behind us, trapping us in the little shed together.

That would have been bad enough, but the roof on the barn was so low and Kelly so big, that I had to bend down over his mane to fit. The heifer hit him several more times while Kelly shoved her into a stall and I shut the gate. All this time I was pressed down over Kelly’s neck hoping to not get mashed against the rafters.

I let us back out into the corral and rode over to the calf. He was up again but absolutely terrified of anything that moved. Kelly was black, like the calf’s mother, and he was convinced he was going to get batted around some more at our approach.

Getting off, I guided him into the little shed and put Kelly in with him. I knew Kelly wouldn’t hurt him in any way, and that the calf needed to get used to a big, black thing being near him without getting hurt. I went to the house for a colostrum paste tube and a bottle of milk and gave the poor little guy a good start with that. He laid down not far from Kelly, absolutely exhausted. I left Kelly and the calf together for a while. I was hoping the heifer and her hormones might settle down while the calf rested.

In a while, I moved the calf in behind the calving gate. I blocked the headcatch so he couldn’t get through, chained the gate firmly so she couldn’t knock it open, got back on Kelly and let the heifer out of her pen.

She had to smack him in the butt as she went by, but carefully avoided the end with teeth. She could see her calf behind the pipe gate but couldn’t reach him. Kelly and I slipped out of the shed and I breathed a sigh of relief when we were back outside with the maniac heifer inside.

A couple of hours later, I went back and the heifer was standing next to the gate by her calf. It was time to see if she would be nice if they were together. Kelly and I slipped back into the shed and she moved away from us. That was a good sign. Her talking to her calf like she liked him was an even better sign. I unchained the gate and pulled it around and out of the way, with us behind it ready to intervene. I watched as the heifer approached her calf. She sniffed him and licked him while he cowered in the corner. She kept talking to him and he finally moved toward her and she let him nose around and finally he got latched on and nursed for the first time. Hunched over my saddle horn in the tallest part of the shed, I was sure warmed by the sight.

Heifers and cows can sure be squirrelly at times. Hormones and genetics don’t always play nice and one will fight her calf like the heifer did. One thing that I was assured of during that adventure was that the rock solid, very elderly horse I trusted with my life, as I had many times, would do his job.

As I rode him back over to unsaddle and put him up that evening, he had a real spring in his step, even danced a little bit. He was rightfully proud of himself. He’d been pulled out of retirement and back to the job he’d excelled at for well over 20 years and it pleased him. I was sure proud of the old man. Even though I never saddled him again, I knew that until the end, he was still the one I’d choose to ride off into a wreck with and expect to ride out again in one piece.