It was a dry winter on the ranch I was working for in New Mexico. What grass there was didn’t have much kick left to it. The chunk of country another cowboy and I took care of, mostly just the two of us, had everything from calving cows, yearling steers, and most of the bulls on it. We got through the calving cows every third day, the yearlings every other day, and caked them.

The bulls had been just grazing in a big, rough pasture that ran up onto the mesa and a black lava, volcanic butte called Tipton Mountain. The bulls that ran in the Tipton Pasture were Longhorn, Mexican fighting bulls, also known as Corrientes, but not the roping kind, and Herefords. The Brahman bulls ran elsewhere. The Longhorns tended to graze up on the sides of the mesas, as there were little hanging parks of several acres all along them. At the base of the mesas, where the mesquite, cholla, and prickly pear were thick, was the hangout of the Corrientes, a wicked, nasty natured group that would lope a mile to get in a fight with anything, including us. On the low country were the Herefords. Those were all big, older bulls that had full horns that were turned. They could hold their own against the Longhorns and Corrientes usually, but mostly avoided them.
We checked on these bulls to a certain extent about once a week, mostly put out salt and mineral, and made sure the windmills were operating properly. Due to the lack of good grazing that winter, the boss told us to start caking those bulls. We knew how many there were supposed to be and it runs in my mind to have been about 50-60 head, maybe more.
We had siren calls in the pickups, so we started blowing the siren and feeding little packages of bulls as we found them. In a week or so, we had most of the bulls coming to cake. With some bulls still missing, we decided we’d better go find them and push them back over onto the southwest side of the mesa and Tipton Mountain. It was possible they’d found the drift fence down and gone clear out of the country, but we were sure they were just too far off to hear us or to realize the siren was calling them, not the steers to the south.
We mostly rode the younger horses that others had turned back for being smarter than them. In the old days they’d have been considered the rough string, but they weren’t really broncs, just green. However, gathering those missing bulls required an honest-to-goodness solid horse. We shared one broke horse between us, a bay gelding called Charlie who was a good one. Al had a five year old in his string that was making a heck of a horse and I had Charlie. So we decided to take them. 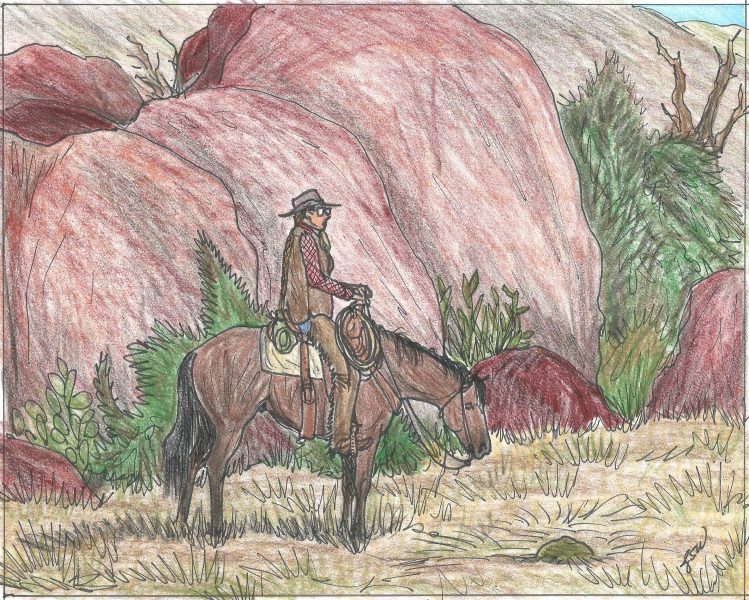 We’d studied the target area for several days with binoculars and figured out where there were some trails here and there made by the bulls. Since it was possible to fall 400-600 feet in spots, having a strategy was appropriate. Al, on his younger horse, would ride out the relatively easier mesa slope and I’d take the reliable Charlie to rough Tipton Mountain. We started early. Al went to the west end, Charlie and I to the east. The base of Tipton was a rockpile that was choked with brush, some trees, and cholla and prickly pear 10 feet tall. I had intended to ride around to the backside of Tipton and start up so wasn’t planning on getting into that brush going out, but Charlie lugged toward a deep cut and followed a trail into the brush for several hundred yard before we came upon the bull Charlie had smelled. That big old Hereford bull was sure surprised to see us and left there like a freight train, busting small trees and brush. He was one we’d never seen before as he had a
crooked horn, so I was encouraged. Charlie and I pushed him on down onto the flat and the bull was hoofing it west when we left him.
Charlie and I started climbing, seeing signs of bull traffic, like big tracks and suchlike, but no more bulls. We coursed back and forth as the ground allowed until we climbed to the top of one shoulder of the butte. The back side of that butte was solid rock and pretty steep. We needed to get down that slope and we started down, but Charlie’s feet kept rolling those rocks and I was afraid I was going to end up under him, so I stepped off and picked my way down. Charlie would slide a ways, then get himself stopped, and I’d hang onto his mane to keep my slick boot soles from making me go too fast. We were both relieved to get to the bottom where I got back on and we kept looking. We’d gotten to the area on the back side where mesa and volcanic butte came together, so below me, from the next ridge, I had an amazing view of hanging parks, lush brush, and huge rocks. We headed for the closest one of these and found a trail that was worn from big bull tracks. The park was maybe three acres and surrounded by huge rocks, I’m talking like 1968 Mercury sedans stood on end, besides rocks all the way down to gravel. The grass was lush in the sub irrigated patches of grass and Charlie and I stopped just
inside it to take a breather and look around.

Charlie let a roller out of his nose and was acting spooky. In the grass in front of us was a spot where something big had been bedded so recently that the grass was still straightening up. At the edge of that was a big pile of fresh, steaming bull manure. No sign of a bull, not a sound of movement. Just Charlie snorting and looking around like a kid in a cemetery at night. We’d come to get a bull, but Charlie’s act was starting to give me the willies. Finally, being smarter than me, Charlie made the decision to leave and carefully turned around and went back the way we’d come, looking back over his shoulder at the rocks across the way. The hair was up on my neck and I decided to go with Charlie, since he was taking the initiative.
When we got away from that area, Charlie went back to normal and started sniffing bull trails again. Whatever we’d come upon, Charlie’s Mama must have warned him about, because he was not going to go looking for that bull.
We rode out the rest of the backside of Tipton, I snugged up the drift fence in some spots, but saw no bull trails crossing it. I knew there were bulls moving out away from us that we couldn’t see, and having made our circle as best we could with the hours we had, headed on over the top and down the other side, following some deer and bull trails back to the face of the mesa. Al was there and a good number of bulls had drifted into the flats away from both of us, so while I pushed them closer, he caked all the bulls that were there. They caught on to the idea quickly.
A few days later, the boss came to talk to us as he’d heard that we’d gone looking for the missing bulls. He wasn’t mad at us, as he appreciated our effort, but it was then that he told us who I had probably encountered but not seen on the back side of Tipton. If he’d have known, he wouldn’t have let me go on Tipton, as that bull, referred to as the Head Hunter, was a dangerous bull. He’d crippled several horses and gutted one. He was a big old Longhorn bull, a dusty color, that had run on the backside of Tipton for years. When breeding time came, he’d go to the pasture where the heifers were bred several miles away, and do his work, then when the season was past, he’d head back to Tipton Mountain, via the mesas. No one hardly ever saw him and stayed away when they did. He didn’t roam around anywhere else, just back and forth to the canyons where the heifers were bred every year.
How Charlie knew that that bull was to be left alone I don’t know, but I’m glad his good judgment prevailed and we didn’t have an encounter with the bull. I think we were darned sure close enough that day and that he was watching from within 40 feet of us when we discovered his bed. That’s close enough. That was one bull that could just stay missing.