Riding with the Greats: The Californios

We hosted The Californios, Dave Weaver and Gwynn Turnbull Weaver, in 2013 at our barn in Wisconsin. They taught ranch roping and horsemanship/cow-working and let me tell you, if you ever get a chance to ride with them or audit a clinic, do it. They are such a unique pair that perfectly bounce thoughts off one another. Where one of the Weavers sometimes cannot come up with the words for available knowledge, the other swoops in with the perfect poetic explanation for something that is seemingly so easy, yet often lost on the average horseman. Whew. Just a glimpse of what Dave and Gwynn bring to the table.

During an exhibition at Midwest Horse Fair in Madison, Wisconsin, before the clinic at our barn, Gwynn rode my horse, an old, non-athletic, slow-moving horse that I have had since 2006 and has been in my family since 2003. We’ve done everything and been everywhere; he’s a good old boy, but not snappy in the least. And if you calculate in my riding, an equally non-athletic, sleepy-type rider, the pair of us could lull you into the most-satisfying dream-less sleep just by watching our rocking-chair lope. But Gwynn effortlessly brought my horse to life which automatically brought me out of my coma. My horse. Snappy and sleek. How did she do that? 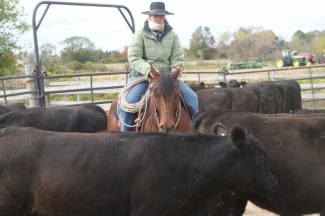 Fast forward to a few days later, and I am on my lifeless old bay and she on another borrowed horse, and I had to ask: Gwynn, what am I missing? My horse looked fantastic under you? She was riding in a snaffle, no less, which he rides around in anything or nothing on his head, but is a touch heavy in a snaffle.

The area we focused on the most was the stop, and how to do so with life. I have been taught my whole life to think about the stop, prepare for the stop, begin to stop, then ask for the stop, then stop. This is not necessarily wrong, because my horse likes to stop. He’s lazy. It’s the natural thing to do, but he would just mosey to a stop, not put effort into it, not matter how hard I jutted my feet forward, or sat my butt down. It didn’t work for us to collect, count strides, prepare, then ask.

Gwynn simply said to stop in one stride using only my hips. She had me sling my seat forward very quickly (somewhat forcefully) in one single stride with my hips tucking up and in. If you try this, don’t lift your seat up and then place it back down in order to stop; you are merely quickly sliding your tailbone from the top of the cantle to the ground seat.

My horse could not ignore the instant change in my body, and it was almost impossible for him to continue with my hips in that position. Changing this little thing, changing the way I stopped and the urgency in which I did it changed the game for us. My lifeless bay horse was slinging his hinder in the dirt and then even backing a stride or two without the use of reins.

Gwynn, a cutter from back in the day, didn’t care what his body looked like or where his head was. She merely cared about the effort in which he was stopping and that actually shaped his body better than if I had shaped it prior to the stop. His head was naturally in the correct position simply because that was where it needed to be to stop that hard.

This also changed to cow-working game for me. By stopping harder, my horse was all of a sudden where he needed to be. We generally lagged behind the cow while cutting, mostly because I think my horse was afraid of being beat by the cow. By stopping better, he suddenly went faster too, not worrying about getting stopped and turned around quick enough. Of course, the rollbacks were far better because of a better-planted quicker stop. It was a small piece that made such a huge difference. Care to go try it? Think quick, snappy, instant. Your body mimics the horse’s actions, so when your hips sling forward in the saddle, your horses will sling forward in the dirt.