Now that we know what classes are offered, let’s talk about what classes I’ve participated in and watched while at his clinics. I have now ridden in every class he has to offer, save Colt Starting, Foundation Horsemanship and Cow Work – though we’ve done plenty of Cow Work in all the H2 classes I’ve attended.

Every time I go, I learn new things, and discover my strengths and weaknesses.  After all, we’re on a journey and we can never get “too” good or “know” too much. When we get that attitude, we end up getting burnt, more often than not. Buck himself has told us that he rode in Ray Hunt’s beginning horsemanship class for 30 years because he always learned something new while in it.

That said, when I attended my first clinic in the spring of 2010, there were about 30 riders in that class. Some couldn’t sit a trot; others had no idea what foot cadence was and still others just struggled because they never get to ride. Overall, the general feel of the class, at least to me, was very novice.  So we didn’t get to do a lot of the things that I thought I was ready to, and wanted to work on- like lead changes, and more advanced collection maneuvers. But what we did get to work on made a HUGE difference in my reformed runaway, go-to, ranch horse, Gump. I found a brace through his right side, and was able to increase the amount of softness and collection in him. I found out that my horse wasn’t as ready as I thought he was for those more advanced maneuvers.  If it were not for the slow work that we did for four days there, I would not have been a believer in doing as much slow work with my horses. Slow work is under-rated by many people. But, no longer by me. If they can’t do it at a walk, we can’t expect them to do it a trot. And slow work helps to continually build and improve the foundation that every well-broke horse needs and deserves.  It is what you should go back to if ever you’re in over your head.  A well-built foundation rarely crumbles.

The second clinic that I attended the fall of 2010, was a different story entirely.  As previously mentioned, I took a 40 ride colt, Dino, (Gump’s younger brother) with me.  That class, with the exception of myself, my friend Sharon and a couple other folks, is a group of people who ride with Buck often- most are going on 3-4 years; a couple had been riding with him for 15.  At that clinic we did focus on the slow work, but we were expected to do a lot of it as homework, or before class started each day.  We did get to work on lead changes, and stops and back ups and lots of fun things, and while I couldn’t correctly do a lot of those things on my colt, I learned a lot that helped me, help my colt. 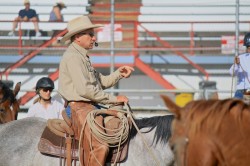 I returned home to the ranch, got on Gump and other snaffle bit horses that are close to ready for the hackamore, and worked on the things I learned there.  I don’t recommend to everyone that you take a 40 ride colt to a clinic if you expect to the get the most out of it. I needed to do that for confidence reasons, and because riding colts is one of the weakest areas of my horsemanship and who better to help me with that than Buck? Since then, I’ve hauled another colt to a clinic; it resulted in selling said horse. I guess I can be taught!

The Fall Clinic, my second, hosted the Fundamental Horsemanship class in the morning, and I was wishing that my checkbook would have permitted me to do both on my colt. Not because the colt necessarily needed the additional ground work- but because I do.  We can’t get our horses too good at leading or on the ground. It’s not possible. I watched that class and longed to be back at the ranch working on those things he was teaching with all the colts we have here.  That class had a few beginners in it too, and at least one rider that had more colt than he needed; but they got through it with the help of Buck.

What is often forgotten in the horse world, is that how horses behave/react/respond on the ground directly affects how they’ll be in the saddle. It’s one of the reasons you rarely find me tying a horse to saddle him. I hold them in hand, because I want that connection. I want to feel what my horse is thinking. I want to know if he’s going to pay attention and be tuned into what I want from him or if he’s going to come apart, be alert v. aware, and just generally where his mind is. Groundwork is probably one of the most effective ways to accomplish this.

I believe these clinics, or for that matter any clinic, can be as effective as you make them. If I would have gotten frustrated by the lack of riding ability of most of the folks at my first clinic, I would have been focused on that, instead of working on getting my horse to be soft as butter. That clinic would have been a waste of money, but Buck is very good at keeping them interesting. If you’re a student that is farther along, than another, often you will get additional tasks to do, if he sees that you’re ready and understand what he’s asking. He may have you pick up a “soft feel” or trot your horse and pick up a “soft feel” (just two simple examples).  Because he is so good at  assessing the ability of each horse and their rider you may find yourself getting different things to do if he sees you struggling with something. Maybe your horse is buddy sour, or in my case, you have a colt that’s lazy and struggles with moving out.  It may or may not have made a difference to him that he saw me ride earlier in the year, but he had me doing things that others weren’t doing because he was teaching me and giving me the tools to help my colt.

In short, believe in what you’re doing or do what you believe in; I believe in Buck and what he teaches. Therefore it works for me. It’s really that simple.