We previously discussed Practicality and Safety. Confidence comes as a result of those. It’s all related.

Confidence is something I’ve gained at every clinic.

Take riding colts for example.  I had ridden a few colts in my life prior to my moving to the ranch here in South Dakota (I had even started my own from the ground up), but riding colts wasn’t something that I thought I wanted to do and it wasn’t something that I was comfortable doing. You could put me on barrel horse that had alley issues though, and I’d be right at home. Frankly, the barrel horse is more dangerous than the colt that knows nothing, but mentally I couldn’t wrap my head around that. By reviewing the fundamentals on my “go-to” saddle horse, at the first clinic I attended in the Spring of 2010, I realized how everything we do on our horses is related. Groundwork is related to riding. Riding is related to groundwork.  Because of the first clinic experience, I became confident enough in what I believed and in my ability to have it happen, that I took a 40 ride colt to the second clinic I attended in the Fall of 2010. It was that colt’s first trip to town.

When I got back to the ranch after the 2010 Spring Clinic, I began to ride all my going saddle horses with a daily review of the fundamentals. It wasn’t too much longer and I began to see a difference in my confidence level on my colts. One colt in particular (the one mentioned above) had bucked me off twice already and I knew it was my lack of confidence that had caused that. It’s a hard thing to do- sit on a colt and stay relaxed while letting them travel where they will, at the speed they want to travel, while quietly directing them when going right or left is the easiest thing for them to do. But it’s something that Buck is good at getting you to do on the horses you take to his clinics- regardless of the rider’s level.  Making the right thing the easiest for your horse sounds so simple, right?  That is yet another principle of “natural horsemanship”. 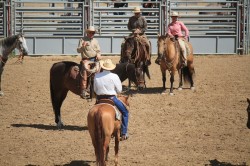 Understanding how to keep yourself safe using a one-rein stop (which I knew of before hand) and by waiting on your colt to find what you’re looking for has helped my confidence. I assure you that had I never ridden with Buck, my summer this year would have consisted of me riding the same old saddle horses, and putting a ride or two on my colts when I was confident enough to do it. Instead I found myself getting on more and more colts, believing and knowing to my core that it would all be good.  The second week of October, I took my 2 year old filly out to the pasture for her 5th ride. Her 5th ride since the fourth of July. We covered about 4 miles- up hills, down creeks through draws, all the while with cows milling around. I would have never done that a year ago. Don’t think, however, that I don’t still struggle- I figure when I’ve thrown my leg over another 100 colts there will still be struggles but they’ll be different than the ones I’ve had recently of whether or not I’m going to survive this ride.

Practicality, confidence and safety are all related and they’re all things that increased in myself as a result of the clinics. Buck oozes positivity and there’s something about him that helps you believe that you too can do whatever you want with your horse. They sky is the limit if you set yourself up for success with good fundamentals, patience and a learning attitude.