Sound Equine Options of Gresham, Oregon, stepped up to the plate when they were needed during wildfires in their part of the country, but it was established in 2009 with the idea to aid horse owners long before their help was needed this summer and fall.

Dr. Scott Hanson had the idea; he knew animals needed help, and he didn’t know how to provide that help. He came up with the idea of a rescue, but he didn’t want to physically own horses. The more we dug into it, the greater the need we found. We started taking in foster horses, and have at any time an average of 25 to 75. It has been all about figuring out how to end this cycle of returning to rescues. We make them rideable and stand for farrier, load into the trailer; we make them into a
citizen. We continually have at least 10 horses in training. Now we’re in hundreds of people volunteering, at fundraisers, cleaning stalls, training. I think it definitely fits the need, I think it ends a cycle.

We are part of a regional disaster preparedness team. It is a bunch of small animal organizations and us, the only large animal organization in this team. We go to meetings every couple of months, and decide, in event of disaster, what we can do to help. With us, we’re like we’ve got trailers. It’s not just for horses, it’s for all livestock. 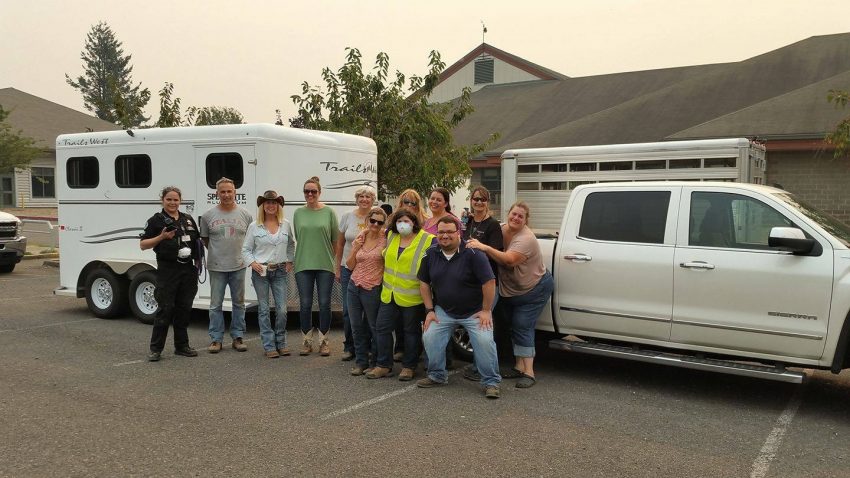 In a 24 hour period, we moved over 500 animals, and it was totally out of our realm, but we had to make it work. We’re city horse people, as you go out away from Portland, we have true livestock community, a lot of cows, alpaca, llamas, sheep, goats, ducks. So we had to figure out how to catch them in the middle of the night with a fire going on and transport them.

It was insanely hot that day, and the fire was close. There was ash falling and it was smoky, which compounded the entire situation. I had 525 Facebook messages of people to help, and even more calls, messages, and emails. We had some who had trucks and trailers, somewhere for animals to go, and some were asking for help.

The outpouring from local community coming in when everyone else is running away…how much good there still is in this world.

There were at least 75 rigs. Everybody has been so amazing to work with. It’s amazing what people can do when they come together for the same cause. It’s been really, really awesome.

Sometimes it takes something bad to happen to realize we have an amazing community.