RANCH HORSE TRAINING: Setting up for success at a colt’s first branding

Roping and dragging calves to the fire at branding time is a timeless tradition in ranching country. Every horse there, though, has had to drag that first calf to the fire, and how that worked out will affect the horse for years to come.

Riding a colt and dragging a calf to the fire compounds the level of difficulty, as the colt is already inexperienced and new at the job. When Colin Wood, Newell, SD goes to a branding on a colt, he prepares them ahead of time and has a way to make that first branding a success for the colt.

“I assess my colt’s ability. Can I handle him one handed, is he confident when a rope is swung on him, have I drug anything with him before and was he comfortable with that? My goal is to set it up so that the colt can succeed at the task and stay out of a wreck,” says Wood.

“I like to show them something dragging behind them long before I go to the branding pen. On my colts, I drag something toward them from the front, let them look it over good, then work on coming in from the side and behind. I do this before I ask him to move his feet or anything else. Then I like to drag something behind them so that they can see some dust and learn to feel some weight. I let my rope run around the horn so they hear that sound too. The branding pen isn’t the place to scare one with any of it,” asserts Wood.

Dragging calves to the fire on a colt with no more than eight or ten rides, Wood is careful to judge the  ropers who are already in the pen, so as not to get in a wreck caused by one of them. “Having someone in the pen who is careless or inexperienced is asking for trouble, so get off your colt and work the ground. It’s not worth getting your colt fouled up,” he says.

“One very important thing, before you ever drag a calf, is to ride into the pen and just let the colt look it over. Ride him all around the pen to let him look, then when he is calm, ride him out past the branding fire or pots, through the people working the ground, and if possible, have them touch him as he goes by.” Wood adds, “Getting him used to all that prepares him for that first calf. If there’s something that bothers him, fix it before you do something else that’s outside of his comfort zone.”

Once the colt is relaxed in and out of the pen, Wood has a little different method of setting things up for the first successful trip to the fire. “A green colt needs to be given confidence and the set up is essential. I like to rope those first calves while the colt is pointed toward the gate. If I have to have him think about handling that rope and calf plus turn around and move out, I can be asking too much. So, I position him so that I can throw a back hand heel trap. It’s the same as a forehand heel trap, just backhand with the opposite motion,” explains Wood. “I like it ’cause it gives you a chance to pick a calf that is standing off on the edge and looking to turn toward the bunch instead of running toward the horse or down the fence the other way. Other ropers in the pen can also be a help in getting a calf positioned.” 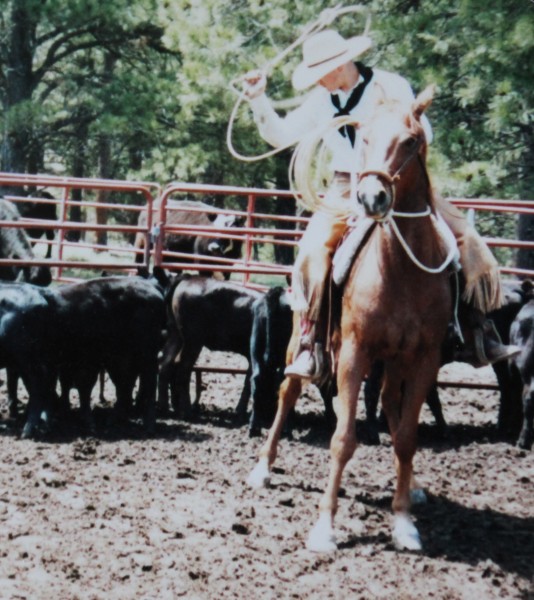 “Once I have the calf heeled, I ask the colt to step out slow. He already knows he can go out the gate so it’s easy for him to see what to do next. Smooth is the biggest thing at this stage. Don’t surprise them if possible and don’t rope a big calf that’s going to be fast and heavy. A little calf that lays will give the colt time to think things through,” says Wood. “When he’s moving toward the gate I will take my dallies, but I still let the rope run a little until he starts to feel the pull. If you have a slick horn and plenty of rope, you can gradually slow your rope down until he’s actually dragging the calf.”     When Wood gets the calf to the ground crew, instead of popping his dallies and turning to face, he just runs more rope and keeps the colt walking as the calf gradually stops moving. “I do that so that the colt doesn’t start thinking that the weight of the calf is what stopped him,” explains Wood.

“I won’t change over to standard shots until my colt is confident and handles with one hand and my feet. When he feels ready, I will start setting up my shots so that he has to do some turning to go to the fire.” says Wood.  Keeping a colt out of a wreck is absolutely imperative says Wood, “If you’ve built that foundation slowly and without getting him hurt or scared, he’ll do about anything you ask him. Taking the time to do it right in the beginning is time well spent and you’ll have a more solid, trustworthy horse down the road. Also, quit him while he’s doing it right and before he’s tired.

“The more chances you give a colt to do something right, the prouder you’ll be of him and the better horse he’ll be,” states Wood.