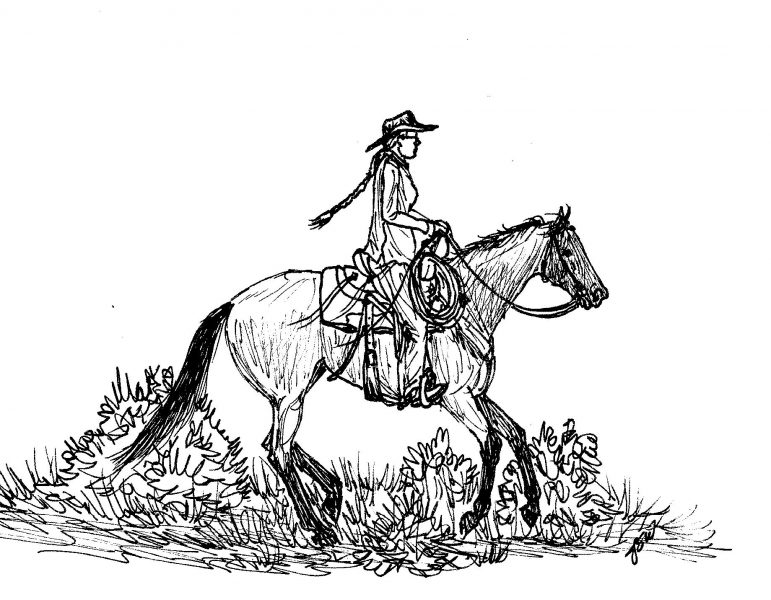 The cold winter days continued, as did the education of the ex-racehorse I had named Lily. Calving started March 1, and I rode her through calving and she seemed to really enjoy pairing out the heifers and their new calves. As high powered as she was, she would gear down and idle along behind a baby calf as it toddled after it’s mother. Her nose was nearly always right on the calf and she would give a very gentle push if the calf stopped.

One day we had a heifer in the corral that was calving. She laid down right by the gate into Lily’s corral and had the calf. Lily got down on her knees, reached under the gate and helped the heifer clean her calf off. Lily just loved baby things. She would nuzzle the tiny kittens that played in her pen outside the hay barn and carefully stepped when they were under her.

Not long after I got her home I got pregnant. I had ridden with my other pregnancy, so Lily’s education had continued. She was so kind and gentle, though green, that I didn’t feel like it was unsafe at all. As spring progressed though, my belly started making it’s presence known and it was getting harder to get on her without my chinks falling down around my ankles. My maternity pants were made all wrong for riding, but I finally had to relent and wear them.

This pregnancy was high risk for me and baby, but not where riding would actually be a problem early on. My doctor didn’t like it much that I was riding, but, he was 100 miles away and what he didn’t know didn’t get me in trouble, right?

One little thing that Lily had trouble with was simply standing still. She stood nicely to get on, and would stand pretty well for opening and shutting corral gates, but standing still out in the pasture while cattle were moving proved to be harder. I was trying to get a count on a bunch of yearling heifers in a big rough pasture one day, as we were going to move them from the three pastures they’d been running in. The gates were going to be closed if they were all in the one pasture, hence the count. I had them strung out nicely, walking toward water and was trying to count, but Lily fidgeted and screwed around until I’d lose my count. I’d started over several times, but was getting aggravated and decided that it was time to cure the fidgets.

The three pastures ran kind of lengthwise, with two side by side to the north and the biggest on the south side. All the gates were open between the three. It was rough with deep draws, washouts, big greasewood, rocks and steep slopes. I decided that we’d lope until she could stand still and be glad to. So we loped. Up those big slopes, across the draws, through the greasewood and rocks, around through the three pastures, and each time I got back to the heifers I offered her the chance to stand still. Over and over.

I don’t know how many miles we loped, but it was hours. She was fit and hard and had broken a sweat, but when I’d pull her up to offer her the chance to stand, she’d take a few deep breaths and be ready to go again. I was getting tired of the whole deal, but couldn’t quit until I had made my point. Those wonderful maternity pants had bunched up on my legs until they were wadded up under my knees, but still we loped. The inside of my knees were on fire from the wads of fabric, but still we loped.

Finally, when I pulled her up near the heifers, she stood still. She was tired of loping at last. I know I was. I restarted the heifers down the fence line and she stood like a statue while I counted, quietly moving a little when I asked, then standing perfectly again. Lesson learned.

My knees, however, each had a big bloody, oozing blister worn on the inside of it where those darned pants had bunched up. My doctor visit a few days later got me yelled at and grounded until after baby arrived. He even threatened to drive over and take possession of my saddle. So, I was afoot for a while, eagerly anticipating riding my mare again once baby was born. And, when I did, she could sure stand still when I parked her.