I gave my newly acquired California racehorse a week or so to get adjusted to her new climate and location. She never got so much as a sniffle from being moved to such extreme weather, and adapted to her new home quickly. She was interested in everything that went on around her and had gotten well acquainted with the heifer calves in the lot next to her.

The weather was in the upper 20s so I decided it was time to saddle my new ride and see what she’d do. Mind you, she was just track broke and hadn’t been on the track or ridden in almost two years by the time I got her. Of course, I wasn’t putting any little exercise saddle on her either, but a working saddle with all the usual stuff like rope, hobbles and medicine bag on it.

I sacked her a little with the saddle pad and she never moved a muscle. I swung my saddle up on her and she didn’t flinch. Once I had her all saddled, complete with breast collar and back cinch, I led her around a minute and pulled the halter off of her to see what she’d do. She followed me back to the tack room door and stood there waiting for me.

I gypped her around the pen for a little bit, turning her back against the fence to see if she’d grab herself over the back cinch, but she just trotted and loped around easily and stopped when I asked her. It didn’t seem like anything was worrying her about the rig. Her cheerful expression never changed, her big eyes and ears tuned in to me all the time.

I put my snaffle rig on her and let her get the taste of it. She didn’t chew or fuss about it, just picked it up and held it like you want one to. I did some ground work with the reins, asking for turns and backing her up. She did it all pretty well.

It was time to see if she was broke. I hitched up my britches, long johns and chinks and stepped on her. She stood pretty well with only a step or two taken, which was to be expected. They leg the jockeys onto the horses, often when they’re moving, so standing still to be mounted might have been a new concept.

After getting settled, I just kind of lifted my hand a little and shifted my weight and she walked off. We did some laps around that corral, then I stopped her, asked for a step back, which I finally got, and then stopped her by the gate into a bigger pen that was on a slope with a little draw through it. We went all over it, me asking for her nose and her generally giving it pretty readily, even stopping when asked. I felt like I could sure enough guide her and get her stopped, so it looked like it was time to go to the big country.

The pasture around the corrals and house yard was big and rough. Lots of big, deep draws, sagebrush and wither high greasewood in spots. There were also holes, rocks and gullies, all covered by about eight inches of snow. The draws were drifted pretty deep on the north and northwest sides, but I could go around them easily. So, riding her over to the big gate, I got her stopped and tripped the latch. The gate swung open and out we went.

Her ears were up and her nostrils flared as we set out on her first outside ride in Wyoming. She was clearly interested in this big, wide world, so different from her southern California roots. She eagerly set off at a brisk walk, steam billowing from her nostrils.

About a half mile from the house there was a big draw that I planned on skirting due to the drift in it. I asked her to go around to the right and she didn’t think that’s what we ought to do, so taking her nose away from me, she plowed off into that draw. Just a horse length and a half into it she was clear up to her neck in the drift. I didn’t really want off as she could end up on top of me if she started floundering, so was deciding what to do next. She snorted really loud, sniffed that snowbank and made a decision. It felt like she pulled it into 4-low, as she simply started backing out in her own tracks very slowly. As she got up out of the draw and onto solid ground, she snorted again, took a deep breath and worked her mouth. The lesson was soaking in. Thereafter, she didn’t try to run the show but waited for me to guide her. 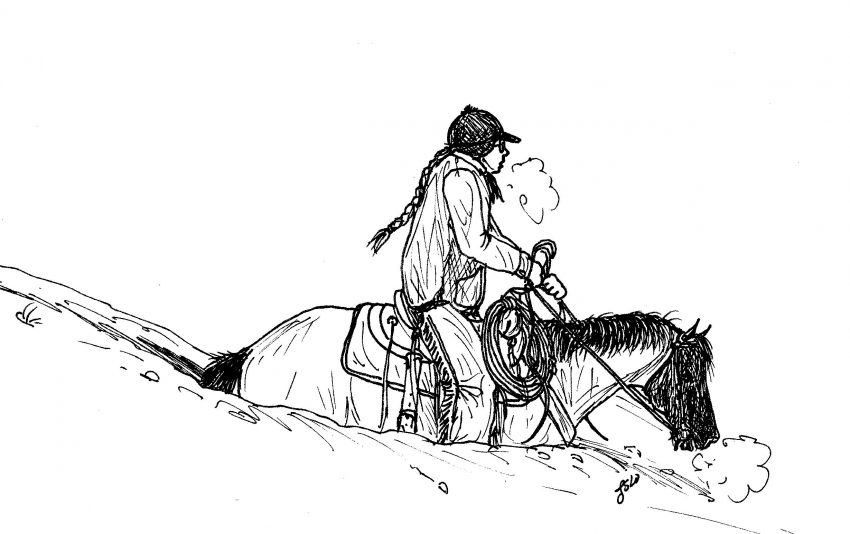 We made quite a circle on that first ride. She was bursting with energy and eagerness and I was revelling in being on this longed for horse at last. We trotted for a long ways and she could really extend out and cover country. It was smooth and easy to ride as I stood up in my stirrups as always (I don’t post). Once up on the more level ground, I encouraged her to lope and she obliged. It was just as smooth and easy as I’d suspected it would be. I could feel the sheer power in this mare though, and the easy lope was just touching the surface of what she was capable of.

We loped for maybe a mile and I checked her, asking her to gear down. She did in a few strides and then I idled her down to a stop. After all the trotting and loping in the snow and sagebrush, she simply took a deep, cleansing breath, let it out and was breathing normally. Oh boy. Big heart and lungs.

I called it a day and rode her home at a walk, doing little circles around the sage and greasewood, stopping, starting, and suchlike, as we went. By the time I rode her into the corral she was dried off. I did a few more little things in the corral like asking for one step in a sidepass. She sure tried to do what I asked and I was finally able to shut the gate on her that I had opened on the way out.

Ride Number One was in the books, and I couldn’t have been happier with her. She had learned a lot on our circle and we had worked well together. The little episode in the snowbank was never repeated again, once was enough. Her beauty was definitely accompanied by brains.