Race Horse To Ranch Horse: Part 2 Worth The Wait

The morning after I got my California mare home, it was still -28 degrees. The night before when we arrived I had put her in the barn with the borrowed blanket on, but had left the stall door open so she could go in and out and get a drink at the tank. She was typical of many horses that have been on the track in that she hated the confinement of a stall and would stand in the barn with her head out the door to look around.

The barn on that ranch was built into the side of a hill so was only exposed to the elements at the south side. It was a neat old barn and was pretty cozy with the wind unable to reach it most of the time. The stall she was in had a manger built in and a grain box. It had sheltered many a ranch horse and cattle in the years it had stood but probably not a California bred race horse.

I was up before the dawn and started breakfast and coffee. As it got light enough to see, I was standing at the window looking down toward the barn, coffee cup in my hand, marveling that that exquisite creature standing with her head out the door surveying her new home was really there. It was nearly more than I could believe.

As I watched, she stepped through the door and out into the snow, sniffing it curiously. She walked over to the water tank, which was an oblong tank with a propane heater on one end. She had drank from it the night before, and had ignored the noise of the heater.

She approached the tank confidently and put her nose in to drink. She lifted her head and looked at the tank, then pushed her nose hard into it again. I knew then that the heater had blown out in the night, which it was famous for doing, and that the ice was thick on the tank. The mare pushed on the ice again with her nose. Checked the other end, same problem. Once more in the middle. Her expression was sure puzzled and I imagined her thinking “dang, that’s the hardest water I’ve ever saw.”

For a few moments she pondered on her dilemma, then she rocked back onto her hind feet, lifted one front foot high and slammed it down on the ice in the tank. She put her foot down and proceeded to drink her fill through the hole she had made. 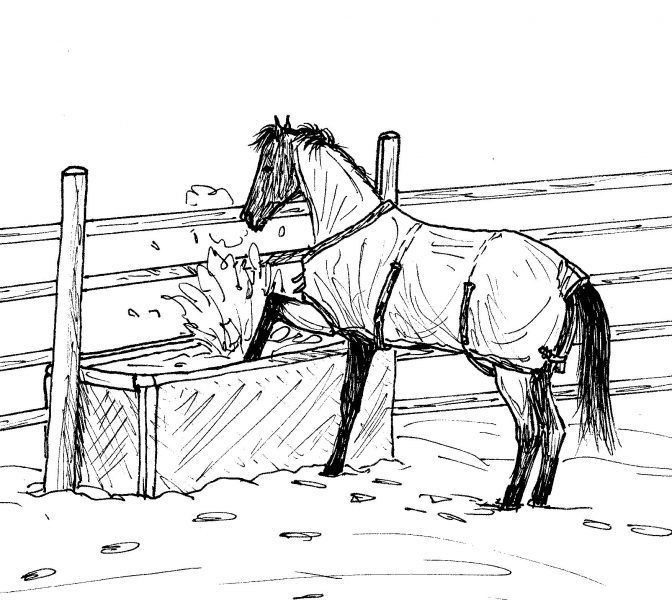 I was astonished! She had been raised in southern California, never having been further north than Los Alamitos Race Track at Los Angeles. The only ice she would have been anywhere close to would have been in someone’s tea glass! But she had used her brain and did what was necessary to get a drink, which sure put her in a new light for me. She showed herself as a survivor!

Later that morning when I was feeding her, I removed the heavy blanket. She had winter hair, she’d been prepared for her new home, and she never wore a blanket again in her life. She rolled in the snow, played in the corral and just stared at the great distance she could see. Her eyes took it all in, the miles of Wyoming visible from her pen. She would flare her nostrils and take in huge breaths, experiencing for the first time the scent of sagebrush and greasewood.

The heifer calves were being wintered in the big lot above the barn and they came down to the gate to investigate the horse there. She, as far as I knew, had never seen a cow of any description. She touched noses with them, sniffed them thoroughly and got her face licked in return. No fear, no concern at all, just a bold approach to new things.

Her gentle nature was also evident from the start, as the barn cats rubbed on her legs and she nuzzled them. She nuzzled the cowdogs and made friends with them. She met me at the gate every time I came to the corral, a habit she never changed in the 20 plus years I had her. She was always glad to see me and eagerly put her head in the halter to be caught.

I had vowed to myself that I would give her a week to settle in, rest up from her long haul, and adjust to her new surroundings. I watched her closely to be sure she didn’t get sick, and spent time just brushing her and getting acquainted. It was getting up into the 20s some days, and though the snow was deep, I was sure eager to get her saddled and start the ranch horse phase of her life. But, I waited. I had waited for a year and a half since I’d first seen her, I could certainly wait another few days, for as they say, the best things in life are worth waiting for.