On a trip to California we visited some folks that managed a breeding barn that stood a really good, speed bred, AAAT race horse stud. At that farm, they had a daughter of this stud that was, to me, the epitome of all that a horse should look like. You know that picture we all have in our heads of the perfect horse? She was the one in my head.

She had been in training on the track and every time they’d get her qualified for a big race, she’d shin buck. She was a really big, stout two year old, and her size and speed worked against her as her developing body just couldn’t stand the strain of training to be a race horse. So, they’d brought her home as a coming three year old and bred her to a race horse stud that was popular in California at the time. When I saw her she was already bred and no longer in racing shape, but oh, was she gorgeous.

At 16 hands, she was the size I like, and every square inch of her was in the right spot. She had straight legs, good feet, perfect conformation and the prettiest head ever hung on a horse. It didn’t matter to me, but her color didn’t hurt the picture either as she was a black legged bay roan with a tiny star on her forehead. Seeing as how she’d been in sheltered paddocks and stalls all of her life, there wasn’t a mark or scar on her pretty hide, unlike most roans that show every bite and scuff. I was smitten. 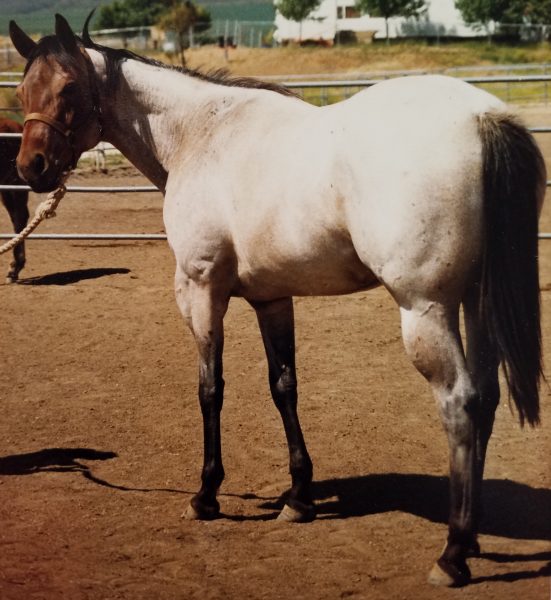 Knowing I would never see her again, I took a 36 picture roll of film of her. I guess just to torture myself with later. But, having seen the perfect horse, I wanted to document it in photos. She was for sale at that time, as it was a stud barn not a broodmare outfit, but so far out of reach it might as well have been a million. So, I had my pictures and the memory of seeing her.

The folks that took care of her were good friends, so we stayed in touch a lot and she always managed to mention something about the roan mare. I knew when she foaled and what she had. When the foal was weaned, they told me that I ought to buy the mare. Of course, the price tag was still substantial, so I knew it couldn’t be.

That summer they talked to the man who owned the mare about selling her to me. He got curious as to whether a race horse could ever be a ranch horse. After much discussion, he lowered the price substantially. It was still out of my budget, but it was awfully nice of him to do so.

The gal kept on me about her. I finally told her that the only liquid asset I had was a yearling steer and he wasn’t very fancy. She relayed that to the mare’s owner. He offered to send the mare to me for the price of that steer and I could make payments on the balance. Oh boy. What to do? I could send him the steer money, yes, but how would I get her from California to Wyoming? That’s a long ride.

He finally decided that I ought to use the steer money to pay for the transport and he’d send me the mare on my word that I’d pay for her as I could. No set payment plan, just whatever I could scratch together for as long as it took. Scared me to death. I still couldn’t make the bold decision to do it.

The end of September the gal told me that I was for sure getting the mare. I asked her how she could be so sure of that since I was still didn’t have anyting but the steer money. She said she knew I was getting the mare because she was starting to hair up. A southern California mare hairing up? What the heck?

The mare sweated through the California heat while her hair came in thick and long, and I sweated over the decision I had to make. Finally, I agreed to take her and committed myself to spending the rest of my natural life paying for her. I sold the steer that fall and he brought as much as a homely Holstein steer could. The transport was arranged to haul her with a load that was going to Ft. Collins, which was about six hours from where I lived.

It was nearly Christmas time when she started her journey to me. I used cardboard to block the slats on our stock trailer and borrowed a heavy horse blanket. We headed for Ft. Collins in a ground blizzard and bitter cold.

She was as beautiful and perfect as I had remembered and I was in a daze as I blanketed her and loaded her into the trailer. We headed north into the wind and it was dark when we pulled into the ranch. I unloaded her into about eight inches of snow and -27 degrees. My California girl was finally home.

Next: Race Horse To Ranch Horse: Part 2 Worth The Wait