Queen of the Road

Dad used to tell me stories about my Great Grandmother Swan. By all accounts, including his, she was a tough lady who had survived some hard circumstances and made a good life in eastern Colorado, having emigrated there from Scotland, via England and Canada, in the very early 1900s.
She adapted to ranch life as a good Scots lady should, and raised a big family with her husband. They ran cattle and raised horses, which in the early part of that century, were as necessary as a car is now. Their horses were well known for speed, stamina, and quality.
Great Grandmother had a team of horses she drove to a buggy. As the kids had grown up, she desired a more social life than the remote ranch afforded, so she belonged to some ladies organizations in the nearest town, which was nearly 20 miles away. When she wanted to go to join her friends and be seen in town, she’d drive this pair of horses. Of course, she’d be wearing her nicest clothes and the horses, harness and buggy would fairly glisten in order to make the right impression in “society”. 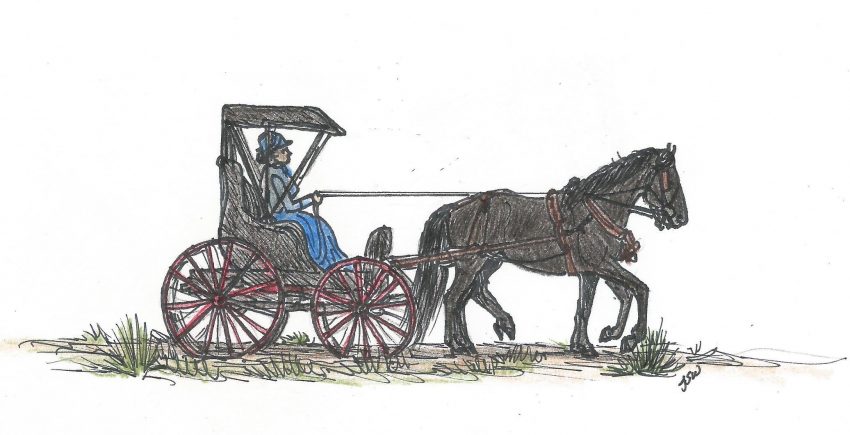 They were a classy team of matched blacks, full brothers as I recall Dad’s story. My best recollection is that they were Hambletonians, but I could be wrong after all these years. They were tall, stout made, moved easy and really had style when she reined them up and trotted them down the road. They were a fine pair, for sure.
Not a meek little woman, Grandmother Swan had a strong opinion about her black team and if someone tried to pass her, her competitive nature just couldn’t stand it and she’d speed her horses up. If the other driver would accept her challenge, the race was on. Men folk back then thought women should be in the background, so no man could let this woman challenge them like that without trying to put her in her place.
That team not only could trot with style but the big boogers could flat run too! Grandmother would slap them on the rumps with the lines and off they’d go. There were probably some pretty wild races down those sandy roads but as far as Dad knew, Grandmother’s team was never outrun. He mentioned a time or two when an on oncoming rig had to take the ditch to avoid the race that was being run, which probably didn’t make her too popular with those drivers.
Unbeaten, those two horses really got into the spirit of things and any rig that came from behind was deemed a challenger in their minds. Dad said they got awfully chargey and hard to hold and may have even run off a few times with Grandmother, but she never relented. At home they got so quick on the start that they were hard to hold while being hitched, so they’d tie them to a gate to hitch them, bringing her light buggy to them instead of the other way around. Once hitched, Grandmother would climb up and take the lines, probably wrapping her hands a time or two in them to hold on to them well.
When she was ready, the team would be untied and the gate swung quickly out of the way. That team would be rearing to go and it took all of Grandmother’s arm strength and her bracing her knees on the dashboard of the buggy to hold them back. They’d ease up after a pretty brisk few miles, then would head on to town at a high trot, which covered those 20 miles quickly. But, if anyone tried to pass, that team and Grandmother were ready to prove who was the Queen of the Road in that stretch of country. It took nerve to race those two big horses, but that lady had it. She’d run on nerve most of her life, working hard along with Great Granddad to run the ranch.
The thrill she must have felt at the sight of those two black horses stretched out and running I can nearly feel myself. I, of course, never knew her, but because of my Dad’s memories, I feel like I understand her pretty well, for I too like fast horses. It’s in our blood.