Puppies. They’re so darned cute and funny. Yep, puppies are adorable. Having said that, I sure don’t need a
puppy. Puppies are also a lot of work, what with the messes they make, all that they need to learn to become a good
dog citizen, and just the consideration one has to have of the presence of a puppy. Nope. I don’t need a puppy.
Sure enough, there’s a puppy here now. Colin kinda/sorta bid on one at a fundraiser and ended up with it. He
picked her out from a picture, so no real planning or thought went into it. Truthfully, if I were going to get a puppy,
she is just the kind I’d go looking for. She’s Australian Shepard/Border Collie cross and from working parents. He
brought her home a couple of weeks ago and she is as cute as a puppy can be and smart as a whip.
I’m also not a house dog person. Naturally, the puppy is in the house since it was so cold when he brought her
home, joining Colin’s other dog, Gracie, in the house. She and Gracie have limited access to the house though and
are only allowed on the vinyl floor in the entryway and dining room. She has learned kennel training very quickly
and spends her nights quietly until she absolutely has to go outside between five and six in the morning.
He named her Concho since she is the color of tarnished silver. Her blue eyes exude intelligence and she really
studies on things she’s learning. I’ll have to admit, she’s one of the smartest pups I’ve ever met.
She quickly learned that the carpet is absolutely off limits. There are two steps down into the living room from
the entryway. She will lay at the top of them and gaze off into the room with longing, but she will not set foot in
there. She was corrected several times and knows that it is just not her place. When her sock toy fell off onto the
floor below her paws, she still wouldn’t step down onto the carpet to get it. Instead she barked sharply at Colin and
stared and him and the sock toy until he got up and retrieved it for her.
She is also not allowed in the kitchen, which is simply one end of the dining room. I don’t want a dog underfoot
in the kitchen (remember now, I don’t even want a dog in the house), so she was told no when she reached an
imaginary line on the floor. She respects that line and will sit down and watch me from there when I’m in the
kitchen.
Poor Gracie, a previous only-dog-child, has fun with her and they play constantly. Probably more than Gracie
cares to, but when someone is dragging along on your tail or your ear, you just can’t ignore them. Gracie’s nice
manners are a good influence for Concho, and that has helped a lot.
Working outside, whether fencing, running a tractor or working cattle, one has to be careful of the puppy. I live
in fear of running over her, so am watching for her all the time. Puppies are like really fast toddlers and at my age, I
may be too slow to keep track of her.
She wants to work and tries very hard to be big and tough. I think she’ll be an amazing cow dog if we can keep
her from getting killed during calving. Moving the springers yesterday, she was eagerly working them through a
gate and was trying to speed them up, but with her short legs and their longer ones, at full speed she could only
achieve a trot in the cows. It looked pretty comical too: a ball of silver fluff herding the big, black cows through a
gate. They respect a dog a lot, which is why she got away with it, but one with a new calf will be a different story.
I’ll probably have even more gray hair by the time calving is over.
It’s a good thing she’s so cute. I’ve been tripped, chewed on, barked and growled at, and nearly knocked down by
this little ball of energy. Just like toddlers, puppies know there’s a limit, so just when you’re about worn out, they
flop down and go to sleep, looking so adorable that it’s all one can do to keep from scooping them up and hugging
them. Concho has this down to a fine art. 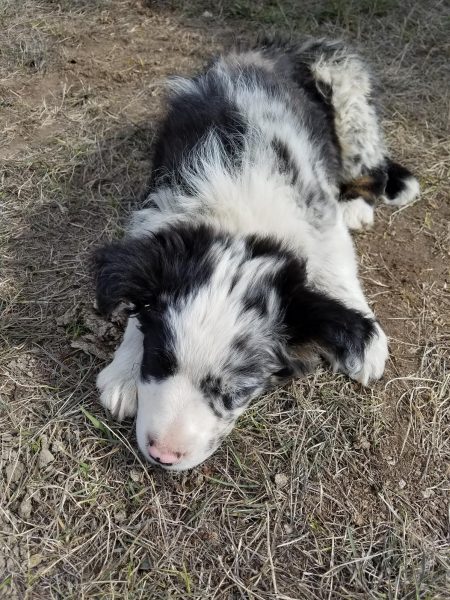 After I had moved here and got somewhat settled in, I had decided I wasn’t going to get a dog. I have my psycho
cat Echo who lives outside and that was all the pet I needed. Some things just weren’t meant to be I guess. So, two
dogs now live here, currently sleep in the house, and have dog hair in every vehicle. I suppose I’ll survive it. And
she is awfully cute. Lucky for her.