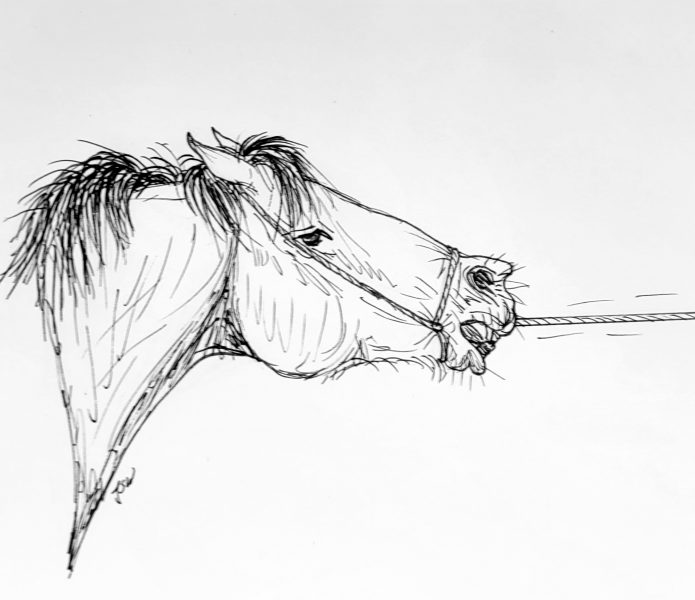 Returning from a fairly short day of riding, I had time to go catch a fresh horse that had been turned out to heal up from an injury. This was a mare I’d raised, started and ridden a lot and she was about a five year old. It was time to return her to the workforce.

I stepped on my top horse Lily to ride up to the pasture where the fresh horse, Sealy, was residing. She was there alone and came right up to my horse. I took my rope down and put a loop around this broke mare’s neck to lead her back to the corrals. I hadn’t even stepped off to do so, as she had come right up to us.

As Lily and I started off, Sealy must have realized that her vacation was coming to an end. She was always sullen and kind of “rode with her brakes dragging”, so she didn’t lead right up. I gave her a couple of chances to do the right thing, then took my dallies and rode off. She set back and wouldn’t lead. My cinch wasn’t quite tight enough to drag the 1300 pound mare, so I stopped. I reached down and tightened my cinch a few notches, and when I sat back up, Sealy had a smug look on her face and thought she’d won.

I rode back to her, loosened the loop and changed it into a war bridle affair. I adjusted it so it wouldn’t pull up into her eyes, turned Lily, and asked Sealy to lead off. She did, slowly, for about four steps, and I took my dallies just as she pulled back again.

Lily dropped a gear and dug in, never stopping her forward motion, while I slipped some rope to keep Sealy off of her hocks. Sealy laid back on that nylon rope while it stretched and the war bridle squeezed her head down until her lips were puckered. I watched her as her eyes got big, her brain started working, and she made the connection that she was causing her own suffering. Lily didn’t care and just kept going.

Finally, Sealy leaped forward and came right up beside Lily. I popped my dallies, coiled up my slack and reached over and adjusted the war bridle into a comfortable position. She was very careful to not let the slack out of that rope.

Lily and I hit a trot and Sealy trotted right up with her head by my knee. That lesson never had to be repeated and ever after, a loop around her neck was all it took for her to lead right up close and like a lady.