When I worked on the New Mexico outfit way back when, one of the most remarkable experiences of moving to the southwest was the respect shown toward women. Gentlemen simply did not swear around a woman or use “coarse” talk. The cowboss wouldn’t even use the words manure or breed around me when talking about cattle. It was sure refreshing and I did everything I could to act like a lady though I was cowboying on the cowboy crew on the ranch. I was treated very well, both as a cowboy and as a woman and that was 40 years ago.

There were two guys on the cowboy crew that were as opposite as two men could be. Big Jerry was raised rough on the docks of Atlanta and was a giant, red headed guy who, though knew nothing about a cow, horse, ranching, cowboying or anything else “out west”, was a super nice guy and a perfect gentlemen always. He’d been kicked out of the Army for spending too much time in the brig for fighting. The other, Tracy, was an honest to goodness cowboy from the brush of south Texas. He was a spare made man, rawhide tough, was good with a horse and cattle, and had never known any other life than that of a cowboy. His eyes were at Jerry’s chest level. In spite of their fast differences, these two worked together well and they razzed each other constantly so made the days go by fast with their banter. At no time when they bantered were the words darn, dang it, or hell ever uttered when I was within hearing. Always gentlemen, they and I worked together and had a lot of fun.

We were gathering fresh shipped calves to get them cake broke. It was a huge pasture of 18 sections, so we worked it by gathering sections and bringing the calves to the feed ground while someone occasionally blew the siren on the feed pickup. On this day, the wind was nearly blowing the hair off of the horses, so the gathers were in smaller areas as the calves couldn’t hear the siren in that wind. The mesquite, cedars and cholla was tall and thick in parts of that pasture. We’d each bring in whatever we found in our gather area and meet at the feed pickup, which was parked by a water tank.

I had picked up the few in my section and had ridden around the little bunch to meet the others. I was still concealed in the brush when I heard Jerry and Tracy having one of their usual sessions of ridiculous arguments. This time however, it was getting louder than normal. I could hear what they were arguing about and rolled my eyes. The argument was whether a black horse or white horse was faster, of all things. I rode out of the cedars behind Jerry. Toe to toe, nose to chest, they were going back and forth, when Jerry dropped a dirty word that one just never heard back then. He loudly proclaimed that “any
f****** white horse could outrun a black horse!” Tracy caught sight of me just as the bomb was dropped and his face turned white, eyes got big, and mouth fell open. Jerry didn’t know what was behind him but whatever it was he was sure he was in peril. He whirled around, saw me on my horse, and his face also turned white then bright red. Tracy said “Jerry” in a condemning tone like Jerry’s Mama may have used, and Jerry yanked his hat off, crushed it against his chest and in an anguished voice apologized profusely. Over and over. I do believe that if he’d have had a weapon on his person he’d have just had Tracy kill him, and Tracy would have done so to restore my honor. 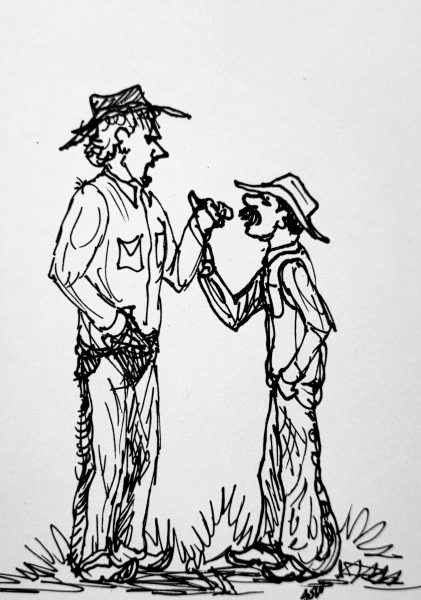 To save Jerry actually dying on the spot, I pretended I hadn’t heard what was said, but I think they both knew I had. Needless to say, Jerry hung his head in shame for days after, couldn’t meet my eyes, and Tracy would cut him dark looks any time I was around. The awkwardness lasted for a couple weeks.

Eventually, the incident was behind us, but to this day, I never have heard the reasoning behind why a
white horse would be faster than a black one.