When Rickie Engesser competes at her first National Finals Breakaway Roping this December, she’ll be aboard an unlikely horse.

Lavaca Sting, “Rollo,” a twenty-year-old gelding, will be her mount for the biggest breakaway stage in pro rodeo.

Rickie, who lives in Martin, S.D., never intended for Rollo to be her main mount.

While in college at Tarleton State University in Stephenville, Texas in 2019, she needed a practice horse. Her assistant coach directed her to another team member, who had a horse to sell.

She rode him and really liked him, even though he was “a little goofy.”

And he was blind in his left eye. Rickie was unsure she wanted to buy the bay. But a family friend who was with her said, “if you don’t write the check, I’m going to write it.” 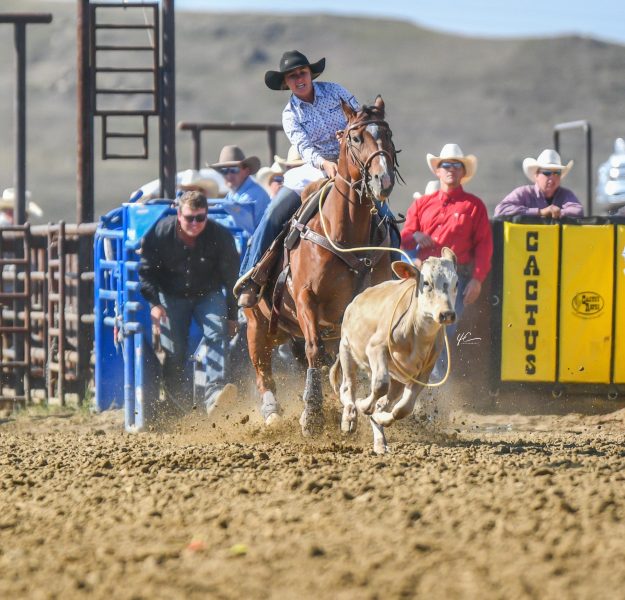 Rickie breakaway ropes at the Killdeer, N.D. rodeo, aboard Rollo, who is blind in his left eye. Photo by Chuck Miner.

So she bought him and brought him home. Then when her good horse was out for six months, Rollo was all she had.

“He took off,” she said. “He became my main mount right away. And he never lost that spot again.”

Rollo’s vision loss in his left eye is due to moon blindness; veterinarians don’t think his other eye will be affected.

It does affect his breakaway runs, Rickie said. He cocks his head differently, and he has to stand in the box differently. “If I square him, he can’t see the calf.” Once the calf is out of the chute, he’s fine. “He was trained to run straight to the left hip” of the calf. His blindness “doesn’t phase him at all in the infield.”

She has noticed that shadows in the arena cause him to struggle a bit, but horse and rider have learned to compensate.

“I sometimes have to rein him more, to help set him up behind the calf, and then he’s fine.”

Rollo has a good heart, Rickie said. “He’s the hardest trying horse I have. And he loves to eat and minds his own business. When it’s game time, he knows it’s game time. But when he’s done, he’s like, let’s go back to the trailer and hang out.”

His loss of sight in the left eye is a blessing, she said. He’s able to see the calf with his good eye. “It’s actually a good eye to be blind in.”

Rollo is easy going, with no special breeding. 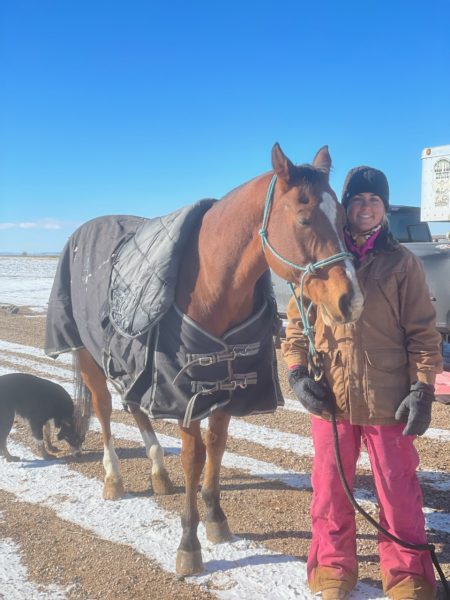 Rickie and her breakaway horse Rollo.