Pretty Is As Pretty Does

It was time to give spring vaccinations and wormer to the horses, so I had saddled Lily up to go trot the main bunch of about 20 head in from the north pasture. I had them in the windbreak corral and was letting a few head at a time into a smaller pen to work them.

These were home grown horses for the most part, ranging in age from two year olds to broke saddle horses. The older horses knew the routine and most didn’t even need haltered, and I took my time with the youngsters to make it a good experience overall. As I haltered each one and gave them their shot and dewormed them, I was thinking what a nice bunch they were. No fuss or spook, most walked up and stuck their head into the halter when I approached, eyes bright and friendly. All but one, that is.

In the bunch was an almost three year old filly that was halter broke and had been handled a lot but hadn’t been started yet. I had gotten Alice as part of a deal for a stud colt I had raised and sold. He went out of the country, literally, so I hadn’t been able to retain breedings to him. Instead, I had gotten to pick the first small group of mares he was to be bred to and got pick of the fillies from that group. It was a good trade and, since they had a great set of mares to pick from, I was pretty happy with the deal I had made.

But, something hadn’t nicked well in the cross. This filly, despite being handled since she was a foal and handled well, was just a witch. She was big, stout and pretty, impeccably bred, but had a cross grained personality that just didn’t improve. I always watched for her in the bunch as she would kick if she got a chance, not because she was startled, but because she could. She’d also bite once in a while though that had been strongly discouraged.

So, as I worked my way through each little bunch, I held Alice back until the last group. Having her in that small pen was a risky deal with her laying for me to kick me. She was caught and tied in a corner where she could be avoided easily. I also didn’t trust her not to strike when I wormed her or gave her her shot, so I was going to do her last in case she crippled me up in the process.Logical thinking at the time, right?

Finally, she was the last one to be done. I stuck the syringes of wormer and vaccine in my shirt pocket and stepped on Lily. My reasoning was that I was at least 90% safer on Lily handling the snotty filly than on the ground. I got her up close to us and took some wraps on the horn to hold her so I could have both hands free. She had tried to bite me already, so I knew she was on her usual behavior. As I sat there a moment preparing to do my job, I just looked at Alice. Her eye was surly, she had her nostrils wrinkled and was grinding her teeth with frustration at being unable to bite me again. She knew she was restrained fully and was mad about it.

It was at that moment that I came to the conclusion that this filly was never going to fit our program of useful, people friendly horses. Despite her pedigree and good looks, she would contribute nothing to anyone due to her personality. So, why would I waste vaccine and wormer on her? Or another bite of grass?

I gave her a little slack, led her over and turned her into an empty pen and pulled the halter off of her.

When I got in the house later, I called to verify there was a horse sale that weekend, which there was. That Sunday I carefully loaded Alice in the trailer and took her to the sale barn, where at check-in, I had “slaughter only” put on the ticket. Her papers were sent in to the AQHA the following week to be cancelled and “deceased” stamped on them. Alice was never going to bite, strike or kick anyone ever again, though with her personality, she sure might have caused a European some heartburn. 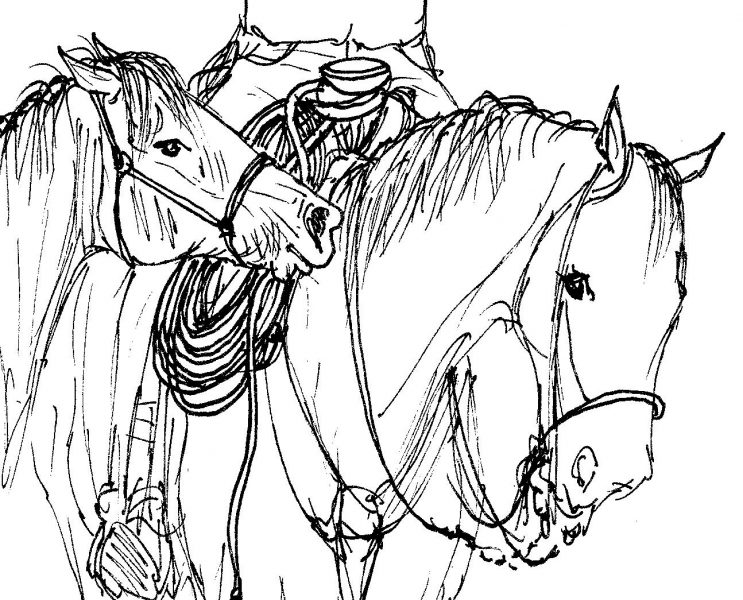