Francis and Violet Sedgwick were as addicted as Mike Coy and many others to running coyotes horseback with hounds; and had the territory, hounds and horses to produce success. Many happy hours were spent enjoying the sport together, and their friendly, gregarious hounds were part of the family. 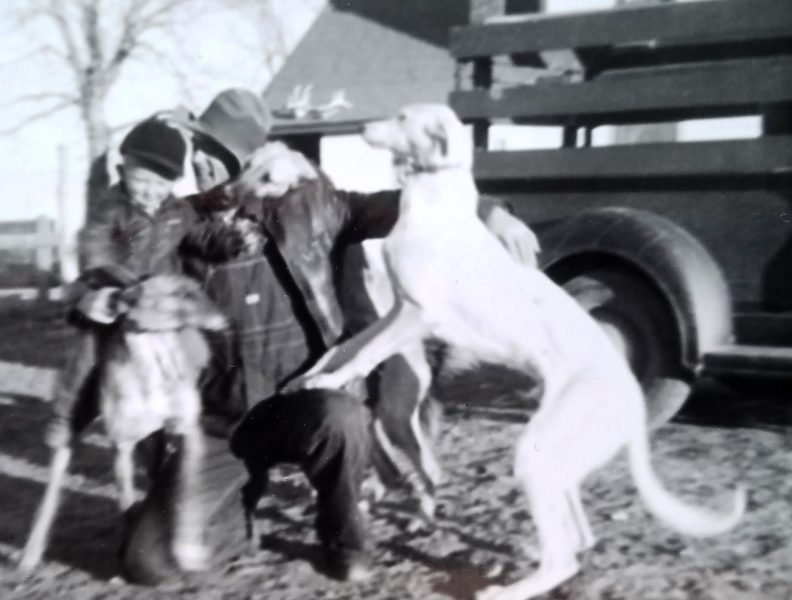 This photo of my Dad Francis Sedgwick with three of his hounds and his very young nephew Tony Marchant proves the hounds were sociable and friendly when not working; no matter how swift and ferocious they were in the hunt. (c.early 1940’s)

According to Mom’s memories growing-up in the Coy household, such coexistence held challenges! One tale involved company coming just at noon on a summer day, a frequent event when you lived near a traveler’s trail. The outdoor porch offered extra space, and escape from cookstove heat . . . but while menfolk and visitors gossiped and womenfolk toted more food from the house, fried chicken and other grub already set out on tables had vanished down the gullets of several hungry hounds!

Baby sister Ada Glee, 8 or 9 years younger than Mom, was ‘privileged’. One spring she audaciously brought her setting hen and baby chicks in the house and settled them in a box behind the kitchen range. Mike cussed, yelled, and dumped them outside. The hardworking father was either mellowing, or simply tiring of his traditional tyrannical discipline . . . she brought them back and smirked at him – which would’ve gotten any of her elder siblings a whipping, or worse! That day Grandad merely laughed at her audacity, and the chicks remained behind the stove. The child was naturally eager to show off her brood to the next wandering visitors who arrived and stood in the yard, enjoying a rare opportunity to exchange news and gossip. Mother hen already outdoors, Ada Glee proudly toted her box out . . . but, by the time she’d snagged an audience with the company, only a couple tail feathers clung inside. Another dangled forlornly from the chin of one of three hounds, happily licking their chops! 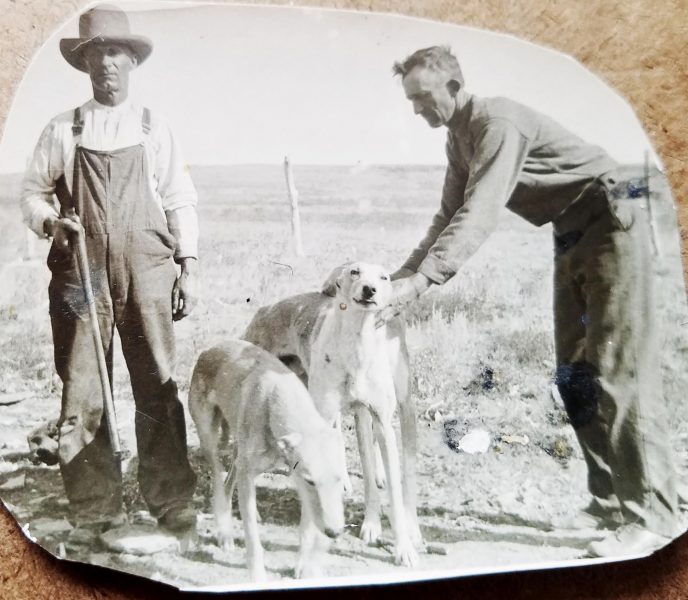 Grandad Mike Coy at left with three of the hounds he hunted horseback with. Looks like he’s holding the collar on two of them, his armed assistant is unknown. (c.1910-1920)

One summer day Grandma Coy and three kids left the homestead in their buckboard, traveling cross-country to visit a friend and the Hampshire Post Office. Grandad and the hounds were at work, with success . . . a heavy dog coyote already tied across his saddle. Spying Grandma’s dust, he altered his course to intersect hers, unloaded the coyote in the backend of the buckboard, and returned to his hunt. Some minutes later one of the kids let out a squall, and Grandma glanced over her shoulder to see the “dead coyote” wobbling up on his legs! Wearing a nice dress, presentable for visiting, she wasn’t packing a gun; but a shovel and
spare fence post lay behind the seat, near the coyote. Stopping the team and handing her eldest passenger the lines, she climbed back there and managed to dispatch the vicious, snarling — but thankfully not fully awake – critter! (No women or children were injured during this event.)
Hounds bred and trained to hunt aren’t discriminatory about their quarry . . . a wolf will do as well as a coyote. Wolves were (and are yet today) the rancher’s worst enemy, more likely to attack foals or eat a live calf – or his mother – during birth. Government trappers were paid to eliminate them, but wolf intelligence makes them very tough to trap. Any horseback hunter with hounds felt privileged to jump one, instantly falling into hot pursuit.
In 1934 Newcastle’s NewsLetter Journal reported, “Mike Coy of Black Thunder one day last week had the pleasure of escorting his hounds in a wolf chase that started from South of Black Thunder, with the ultimate end on Lodgepole Creek. The wolf proved to be female, and extremely large for the gray wolf type.” 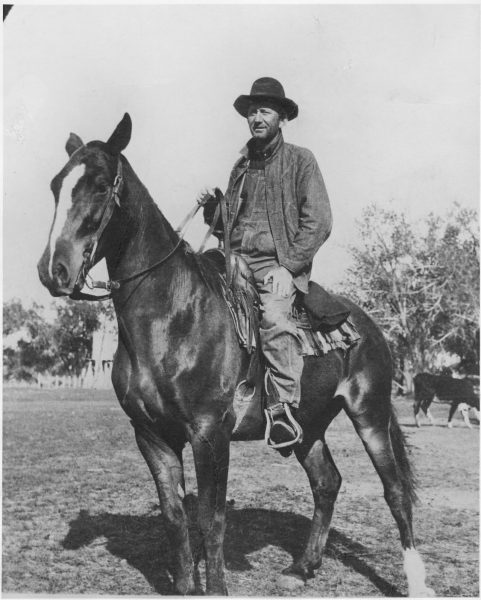 Grandad Mike Coy on the kind of horses he ranched with, and used for running his hounds after coyotes. (c.1910)

My husband’s grandfather William Allen Stearns ran big bands of horses in the Black Hills east of Newcastle. He trailed 300 Percheron mares there from Nebraska in the late 1890’s, shipped draft horses to St. Louis by carloads for years; then started running Thoroughbred stallions to produce and sell horses through the Government Remount program through WW I and beyond. Wolves were his bane!
After most had been eliminated in that region, one wily renegade Canis lupus continued wreaking havoc across his favorite hunting circle. Mr. Stearns declared a wolf war — organizing the population of a wide area on both sides of the Wyoming/South Dakota border into a big horseback drive to end that reign of ruin – by ending the furry terrorist! He’d earned a bloody bad reputation and his haunt was zeroed in, based on his most recent slaughters. At the appointed date and time dozens of cowboys and cowgirls converged from many directions, forming a circular noose of mounted hunters stealthily drawing together around wolf’s territory. Someone jumped the predator; yells went up and were relayed, focusing all into hot pursuit. After miles Grandfather Stearns, in the lead on a speedy Thoroughbred and totally immersed in the thrill of the chase, drew so near he rose in his stirrups for the kill – a bead finely drawn on the center of wolf’s broad head. All the riders close enough to see were zeroed in on the action, breathless for the shot . . . when their screen went blank! Elderly Victor Pedulla from north of Newcastle lived his last years in Weston Manor and told me about being with those riders as “just a kid”. He said “Mr. Stearns and his big Thoroughbred horse were quite a ways ahead of the pack, right on that wolf’s tail . . . and then they all just disappeared!”
Family lore has it this way, “Grandad was so totally focused on pulling the trigger, he had no idea they were THAT CLOSE to the brink of Red Canyon! When the wolf’s head disappeared from his sight he had no time to wonder what happened . . . he and the colt were both trying to get up, at the bottom of a 20’ cliff. He caught one fleeting glimpse of that wolf, other side of the canyon, hightailing it for Pilger Mountain.” Custer County Chronicle’s historical files carry a story on the later demise of the region’s “last wolf” – on Pilger Mountain.

Perhaps it was a grudge about his horseback tumble and wolf’s escape that caused Grandfather Stearns to dispatch his next wolf the way he did . . . more likely it was the money he could save by not wasting a shell. Family lore says the critter had stepped into a Stearns wolf trap and William and Dora, checking their sets on horseback, found the trap’s dragging hook entangled, foiling escape. Roping the wolf’s head, William hit the end of the rope horseback; while diminutive Dora (about 5’2”) grabbed a heavy fallen limb and persevered until she’d beaten him to death! (No women were injured during this event.) The jawbone,
presented at Custer County Court House, fetched the Stearns’ a bounty. 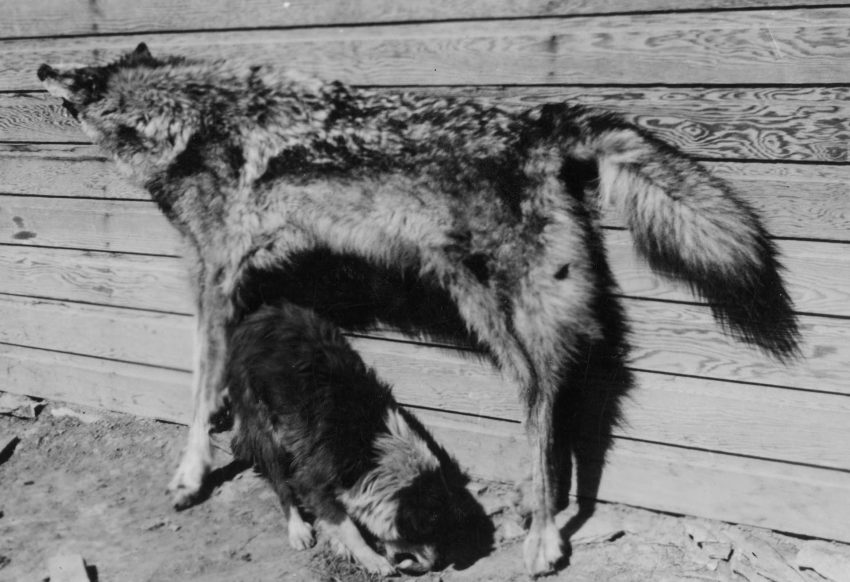 This wolf, killed by Oley Darlington, is representative of the wolves occupying the region Grandad Coy and the Keeline Brothers hunted on horseback, 30-50 miles SW of Newcastle. It was one of the last to be killed in that region . (c.1920’s)