I’m an old ranch widow, more or less “forcefully retired” from spending all my time with horses and cattle . . . old age does that to ya’! My hilltop home overlooks the region I grew up in and made pony tracks across, with Mom before birth and until I was three, riding good horses for another 70 years. Visitors marvel at the huge wolf rug with mounted head, covering most of one wall in my living room . . .  an Alaskan gray wolf we purchased in a fundraising auction for the Wild Sheep Foundation years ago in Reno. I make a point of informing them that my people and my husband’s people have been ‘horse people’ for generations, that wolves have been horse-killers (and people-killers) for eons, and that we hung that pelt to proudly emphasize our belief the only good wolf is a dead wolf! In these next few segments I’ll share with you the history of my family’s means of predator control.

Amid the first decade of the 1900’s my maternal grandfather Mike Coy jumped a freight train in the Missouri Ozarks of his birth, hopped off in Douglas, Wyoming, and soon hired on at the AU7 Ranch . . . until he could take up a homestead. Mike was a restless, born-wanderer who’d already spent a few years raising kids in Montana, working as a tie hack and on ranches. Wyoming’s prairie “caught his eye” while approaching the Platte River crossing with his wife and four children during their
summer-long horse-drawn two-wagon trek back to Missouri, just months prior to his boxcar return. Other pioneering men shared Coy’s affinity for that range. A number of large livestock holdings spanned the region . . . dominantly the Keeline Ranch which stretched from Gillette to Douglas, and southward, and eastward, to encompass nearly 300 sections of grassland in three counties. Mike Coy settled in the area, and his kids, walking back and forth to school (summer-school because winter conditions were too severe), were terrified by herds of Longhorn steers packing Keeline’s Flying Circle brand. Mike’s daughter Violet (my Mom) recalled big, noisy, rapidly approaching dust clouds announcing their impending implosion into a colorful bunch of curious, bucking, bellering, steers – racing to investigate what sort of little varmints were invading their territory. 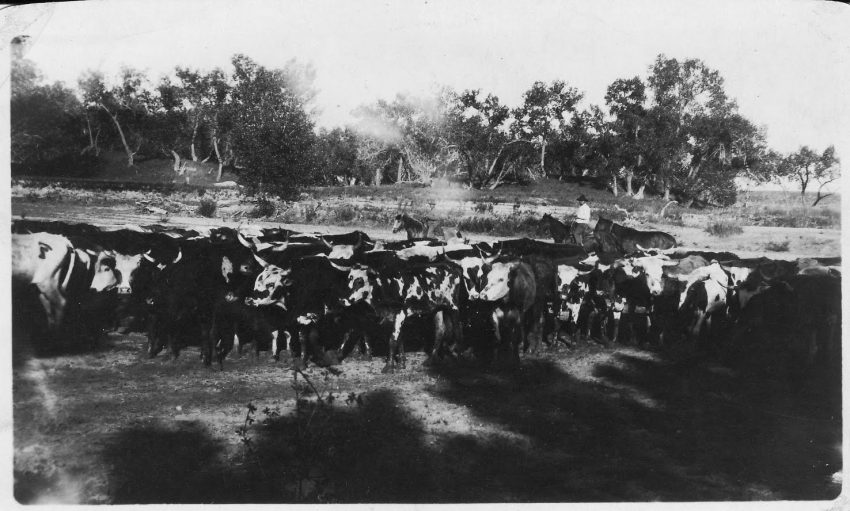 These were Sedgwick cattle from Texas on the Cheyenne River southeast of Newcastle; probably comparable to range steers Mom and her siblings encountered while walking to school southwest of Newcastle. (c.1910)

The kids would bunch up tight (as advised by their elders), silent and immobile until the herd was fairly near. Rushing them suddenly, waving arms and whooping, was a surprise ambush tactic that thankfully sent the skittish critters fleeing; while kids hastened out of sight and closer to school in the opposite direction.

Neighbors, no matter how scattered across vast unsettled spaces, became friends. Important to one another whether rich or poor, they stuck together in work and play. Mike Coy owned a good set of hunting hounds, savvy in double-teaming coyotes. The speedball catch dog would grab and throw the coyote repeatedly, addling and slowing him. The slower, tougher and more powerful kill dog would eventually catch up to the tiring predator and permanently end the chase. Joe and George R. Keeline shared Coy’s passion for coyote hunting with hounds, and they enjoyed it together when time allowed. Grandad Coy was proud of well-trained hounds he could command to sit or lie down behind a ridge, waiting while human hunters peeked over high ground to scan the terrain. 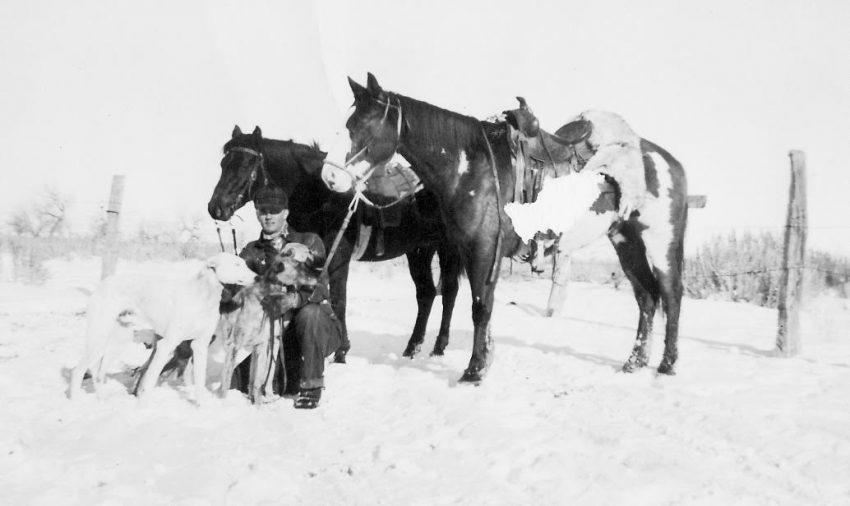 Francis Sedgwick, with favorite coyote hunting horses, praises his hounds for the prey tied behind his saddle. (c.1942)

Sighting coyotes, they’d utilize the concealment of low ground to ride a diagonal course, approaching much nearer before jumping into pursuit. Grandad’s eager, yet obedient hounds would often stand on hind legs trying to get high enough to view what he saw! Greyhounds were favored for this sport, though Mike had some Whippets and at least one Irish Wolfhound among his several dogs. Only the best few were hunted regularly, others rotated in for training. Transient fur-buyers brought a market for winter pelts. With heavy predator populations in later years, bounty money was paid for coyote ears turned in at the county Court House any time of year. The colorful, canyon-serrated land bordering northeastern Wyoming’s rugged Rochelle Hills made all-out horseback chases in the wake of speeding canines plenty exciting — fox hunting over fences would’ve paled, comparatively! 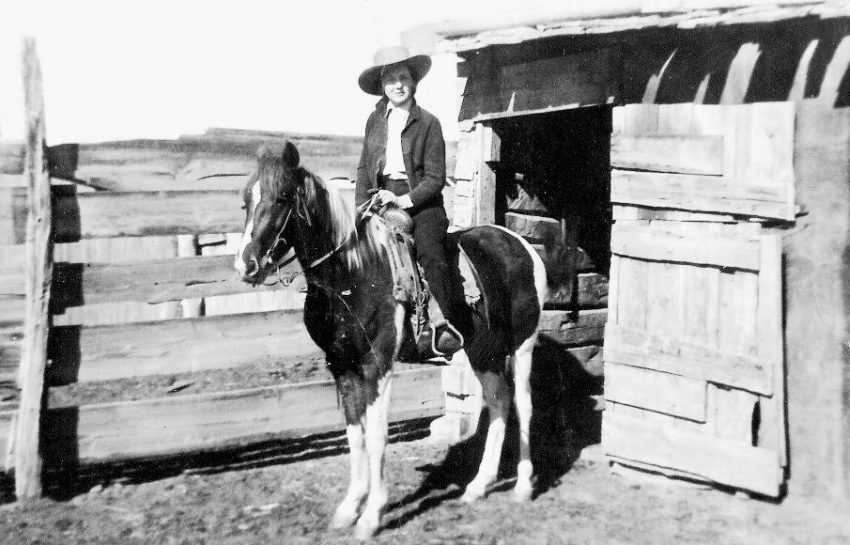 Mom, Violet Coy Sedgwick, on a pinto she used for coyote hunting. She and Dad bred them from foundation Sedgwick Ranch incorporating Shetland and Thoroughbred. R.C. said they were “So small and quick you may as well saddle up an antelope and try to stick with it!” (c.1940)

Of course, it was addictive – and Mike’s affinity for it spawned at least two more generations of addicts. Dad trailing a bunch of yearlings cross-country with Mom driving her car (on a road roughly paralleling his route to pick him and his saddle up at their destination), was nearly disastrous. Over a hill out of her sight, Dad observed the strange phenomenon of a funneled dust cloud rising on a windless afternoon . . . and guessed . . . correctly! Violet had jumped a coyote and made chase, forgetting that cars weren’t engineered to turn back behind a zigzagging coyote the way a horse does!
Mom’s version: “When he ducked off I gunned it and whipped the steering wheel to pursue him. Then, I was hanging onto the steering wheel for dear life, with vertigo, my face plastered up against the glass in the passenger door for some time. Miraculously,
the car gradually slowed, the outside wheels eventually came down on the ground, and I was able to sit upright, thankful there hadn’t been a rollover wreck! I never saw the coyote again…”