Many early settlers in Northeastern Wyoming ran sheep, shearing and lambing in late spring. They suffered devastating financial loss as lambs (even ewes ripped asunder while giving birth) fed starving coyotes. Most mama cows still wore horns, yet their helpless calves frequently fell prey to the predator striving to feed it’s own young. In that era the county paid bounty for every coyote killed, including pups. In the wake of devastating years of drought, dustbowl and Mormon cricket destruction, times were hard, ranch income was scarce, and a dollar in your pocket meant a lot.

Unlike the breathtaking hunts of other seasons, the springtime horseback coyote hunters’ method was to pack a bedroll out onto a ridge in rough country and sleep there, listening to the coyotes howl. After a few different nights in an area, those who knew the lay of their land like the back of their hand could pinpoint where coyote dens, possibly several different ones, were located. Snakes for sleeping partners weren’t so likely when the bed was elevated ten inches or so off the ground! Mom and Dad’s steel “camp cot” included a frame and legs that broke down into a roughly 5’ long section, which the flat interlaced wire “springs” were then wrapped around. That slipped into a heavy canvas case, easily packed on the side of a saddled horse. The bedroll of rolled up soogans, carried on the other rider’s horse, rolled out atop the assembled cot for a comfortable rest. 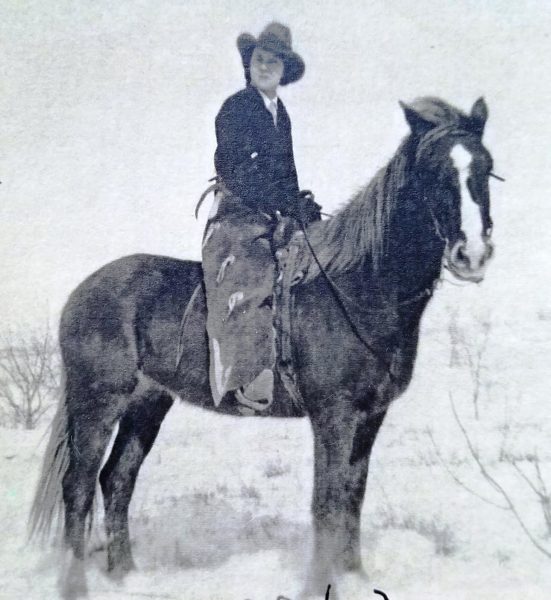 Range-bred and raised horses carrying Thoroughbred blood were fast and tireless at work. This is Mom, Violet Sedgwick, on one she favored for running coyotes. (c.early 1940’s)

Perpetually horseback on the land, traveling or checking cattle, they knew every preferred trail of bothersome Canis Latrans, and many warm evenings, they’d ride to some long ridge adjacent to such trails among deep draws. Unsaddling and hobbling, or
staking out, their horses, they’d set up their bed and prepare to enjoy Wyoming’s glorious Milky Way and other beautiful star vistas, ears tuned for the moonlight serenade of coyotes. Denning coyotes seemed to communicate that way . . . or maybe they just enjoyed hearing themselves sing. For whatever purpose, howls would come from one draw or bowl or ridge, soon answered by yipping voices from another. Some nights they’d figure out the exact locations of three or four dens within a half-mile circle. Another night spent nearby would confirm their knowledge, possibly yielding as much or more new information. At daylight they’d ride separate trails home for breakfast, each skirting an area the howls had come from, seeking the most abundant coyote tracks and scat in soft soil around and near certain roughs, rocky ledges, and other range features ideal for dens.Those places would be designated on maps at home. Another pleasant moonlit night the process would be repeated, in a different area. If spring rains had been plentiful, or there was any standing water in the low spots, the hunters were tortured by starving mosquitos! No K-Mart’s selling odoriferous repellent were available . . . taking refuge beneath mosquito netting offered limited
relief. 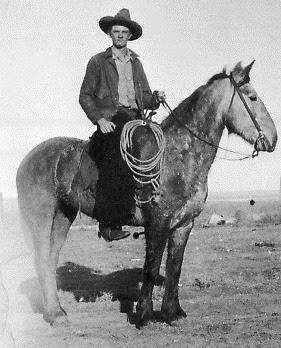 Mom’s son R.C. Donaldson attended high school in Newcastle, and after weeks of their listening, spotting and mapping, he’d drive the 40 miles out of town on Friday night and spend the weekend. Carrying picks, shovels, and flashlights they’d ride to each
marked den to dig it out, and hopefully retrieve the pups. One bonanza weekend they were able to raid 18 dens! The lad was ready to “quit school and just hunt coyotes full time” until Mother reminded him how many miles and hours she and Dad had put in
locating those dens!

Dad could usually dig down into a den and widen it out so that he – being a slender, long-armed and lengthy 6’4” – could manage to reach the pups. He’d rigged a long, sturdy twisted wire with a wad of barbed wire at the end, which would snag into coyote fur when twisted. Once contact was made and there was resistance to his pull, the pup would be dragged to the surface and handed off to a helper, to be quickly dispatched and dropped into a tow sack for later disposal.

Before their eyes were open the pups were easy to retrieve. Older pups sometimes had plenty of “fight” in them. One large den, wisely located under a rock ledge on top of calcified sand rock, could not be tunneled down into. The entrance wandered on a slight downward slant, around a bend. After directing Mother to tie a rope to his ankle so they could help pull him out if necessary, Dad put the sack in his shirt and the flashlight in his mouth, freeing both hands to pull himself into the tight crevasse. Starting to wriggle in, he hoped the tunnel wasn’t long, and he could retrieve all the pups at once when he came to their bed.
Upon reaching the curve in the tunnel and turning his head to navigate that, light was reflecting back at him . . . from the white fangs and glowing eye of a snarling mama coyote! Even yet, nobody knows how he managed such a yell with a flashlight in his
mouth; but all hands fell to the rope and dragged him backward almost as fast as he was crawling, to a safe exit!