Pilot and the Pool Party

A long time ago I was in the market for a young gelding. I had summer herd cattle to ride on later in the season, so while at a horse sale the end of January, I bought a gorgeous black Thoroughbred gelding. He had been in training on the track and was a three year old as I recall. I took the fit, hot booger home with plans to get him riding nice through calving and then having a rather broke horse to go into the summer season with.

I didn’t know anything about “letting one down” from off the track. He was fed up hot and I figured the best thing to do was to simply ride him and let the sizzle wear off of him with wet saddle blankets. That it was January on the northern plains wasn’t a big deterrent as I had riding to do most of the time anyway, and deep snow makes the sweat run a little quicker on most horses.

Pilot was the name I had hung on this leggy gelding, after a good horse my Dad had at one time, but after getting to know him a little better I probably would have named him something else, like Nutsy, Nitroglycerine, Poison, or Clutch. But, Pilot it was.

The first few weeks I rode him, I would get on him in the snubbing post corral and warm him up a little, then trip the latch on a wooden gate in the corner and ride out that way to start my circle. He was as fit as a racehorse could be, so loping 40 miles would have been right up his alley. I’d take him to a big flat with about knee deep snow on it and lope big circles, figure eights, and suchlike and get a little sweat on his shoulders. Then I would go do whatever other riding that was needed, having gotten just a little of the edge off of him. Mind you, Pilot wasn’t broncy. No buck at all. But, man he had throttle. It was like trying to ease the clutch out on a race car to get him to idle off.

Some bred heifers had been bought after I’d had him a few weeks and I was given the job of taking them out for a little walk every day in a small pasture north of the place. They were really thin and in order to get some weight on them and get them ready to calve in March, they needed good feed, but also needed exercise to keep the calves from getting too big. Perfect job for my antsy black horse. He could learn to idle down while following these little heifers around their pasture.

The way out to the pen they were in was through a gate in a corner. It was in the east end of an east/west fence line, maybe 80 feet long, with a water tank on the far west end, divided to water four corrals. The gate was a steel gate that, of course, sagged just a smidge, so you really had to put your arm into it to get the thing to unlatch. Usually I would lift the gate a little with one hand while pulling the handle back with the other, but with the fidgeting of my hot horse, I thought it prudent to do it with one hand and keep ahold of him.

The first evening I went to walk the heifers, I rode Pilot up next to this red gate. I got him to stand quietly, facing down the fence toward the tank, petted him, and pulled that handle hard with my one hand. Apparently the red gate and the starting gate at the racetrack he had been on sounded exactly alike when the gate tripped.

Like a rocket, Pilot shot down that fence line and came to an abrupt stop in the tank with his chest against the fence that divided it. We were quite wet, but still upright. I knew that things could get dicey when he came out of that tank, so I hastily stepped off, onto the edge and to the ground. He thought for a moment and launched himself out of the tank sideways and landed next to me, dripping mossy water and snorting. 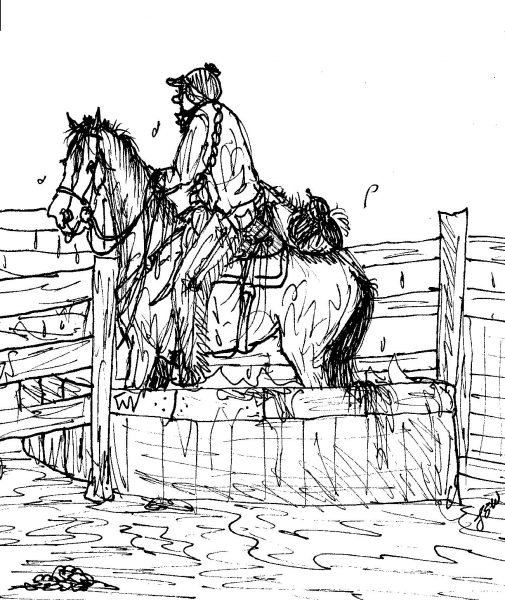 I stepped back on Pilot and we went back to that gate and worked on it and it’s noise until he could stand still through the ordeal. We made many trips through that gate after that, but none as spectacular as the horserace to the water tank that ended in a bath.