Peppy Belle: She Started A Dynasty 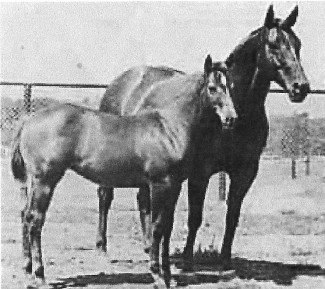 In 1955 a sorrel filly was born in west Texas. There was some mystery as to her owner at the time of her birth, but a recent correspondence with Quarter Horse breeder Lee Jones of Rochester, Texas has revealed a probable story.

According to Jones, when the aging Pep Up, owned by the Waggoner Ranch, got his foot cut very badly, he was taken to Dr. Lacy’s vet clinic at Vernon, Texas. The wound was grave enough that the Waggoners decided to put him down. Otis Gafford was there and said he would pay the vet bill if he could have the old horse.

He was granted ownership and the care he received at the vet clinic healed him up enough that he was allowed to go home. Mr. Gafford found a wheat pasture to put the old stud on, as he was in pretty poor condition, and turned him out on it. In the pasture with him was an old mare named Belle Burnett. The two managed to produce a filly that was named Peppy Belle.

Peppy Belle produced 11 foals in her career. Those foals accumulated 369 total points in the AQHA and NCHA earnings of $158,333 back in the day of small purses. Some of those AQHA points were earned in halter classes, suggesting that her offspring weren’t just athletes but pretty as well. The earnings of her descendents today would be in the millions of dollars with the thousands of horses that carry her blood in their veins.

When Peppy Belle was bred to Leo San, the offspring had three shots of Traveller, Four shots of Peter McCue and of course, two double doses of Joe Blair (TB) and Della Moore. It’s no wonder that the two aforementioned stallions, Peppy San and Mr San Peppy, left such indelible marks on the Quarter Horse world.

Peppy San was owned by Douglas Lake Cattle Co., Douglas Lake, British Columbia and trained by Matlock Rose. He was the AQHA Champion Cutting horse and High Point Cutting Stallion of 1967. He was also the NCHA World Champion Cutting Horse the same year and is in the NCHA Hall of Fame. He in turn sired Peponita who was the 1977 and 1979 NCHA World Champion and AQHA World Champion Senior Cutting Horse in 1977 and 1978 and is also in the Hall of Fame. He sired many successful cutting horses including Peponita, San Jo Lena and Smart Peppy, the dam of Smart Little Lena.

Mr San Peppy was eventually bought by the King Ranch as one of the few outcross stallions they ever used. He was trained by Buster Welch and was NCHA World Champion Cutting Horse in 1974 and 1976, AQHA World Champion Cutting Horse in 1976. He went on to sire the extraordinary Peppy San Badger who was also used by the King Ranch as an outcross stallion. He was NCHA World Champion in 1980 and was inducted into the Hall of Fame. He went on to sire winners in reining, cutting, calf roping and team roping. Mr. San Peppy sired many other successful cowhorses including Tenino San.

Peppy Belle was quite the producer. If she had only produced the two famous stallions talked of here she would have been considered a success, but she produced 11 total offspring that contributed to the world of performance horses. Her offspring were conformationally correct, with keen heads, good necks, good backs, deep hearts, big hips and good legs. The substance and bone of her famous sons carried them to long, successful careers as cutting horses in a very tough arena.

The grand mare’s legacy carries on. Next time you’re looking at the NCHA, NRCHA, and AQHA standings, take some time to notice just how many of those horses carry her blood. She may be long dead, but in a sense, she’s still living.