I was looking at a magazine a few days ago and saw a picture of a peacock in full display. They sure are a beautiful bird and fun to look at. I know a couple who had talked about getting peacocks. She wanted some and wanted to raise a few, he said they were dirty, filthy, noisy things and refused to get any. So, they had a few peacocks. Just a couple of peahens and one proud herd sire.

What he felt about the peacocks was reinforced daily with poop in mangers, poop on equipment, and the infernal screeching that they do. But, to keep the bliss alive in their marriage, he grumbled mostly to himself and refrained from dispatching the big birds.

This couple also raised horses. Really nice, fast, race bred horses. Each fall they would have a big lot with their beautiful weanlings in it, sometimes as many as eight or 10 head. He fed them to grow them up big and stout in preparation for going to the track, and of course, this great nutrition also had them practically bursting out of their skin with energy and exuberance.

He and his wife both worked full time, so time to halter break all these colts kind of got away from them until finally, the big bruisers were just a little much to handle. So, with the help of their grown son, the nearly yearlings were all haltered and turned loose dragging a long lead rope in their big pen. The man would walk through the pen during chores and pet the colts, often times taking hold of a rope and asking for a little movement and it sure helped him get them to leading a little bit as they’d learned to give to the pull of the rope when another colt stepped on theirs.

One morning, on his day off as I recall the story, he went out to feed his colts and do some other chores. He discovered that the colts had somehow gotten their halter ropes all tangled up and they were all tied together at varying distances. They sure couldn’t be left that way, so, knowing these colts were actually gentle and they were all friendly and liked him, he stood in the midst of them unraveling the ball of halter ropes which were also somewhat muddy and maybe even a little frozen in spots. He knew it would only take a minute or two.

One corner of the colt pen was built up against the wall of a big barn that had in early days had a loft, so the peak was quite tall. So focused on the predicament of the colts and then the task of untangling them, he hadn’t noted the peacock on the top of the peak of the barn.

For those who aren’t familiar with peafowl, they are bigger than a chicken, have big wings, and the males big tails, but they are terrible at flying. They can get pretty high in the air, thus their tendency to roost on barns and high fences, but the getting down to the ground isn’t a pretty or graceful sight. They essentially hurl themselves off of whatever they are on, flap furiously, screech loudly, and land like a misguided missile.

Both the man and the colts were busy with his knot untying and no one was looking up, back or anywhere else. Suddenly, for reasons known only to the peacock, he launched himself off that barn. Coming in like a shot down fighter plane with no steerage, he plowed noisily into the herd of horses and humanity. 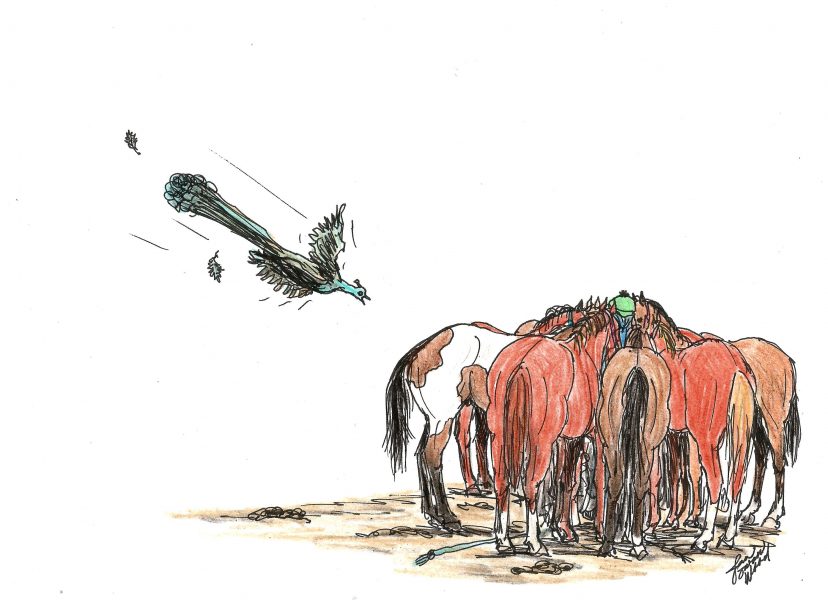 The colts exploded! They went up, over, under, and around, all in one seething mass, knocking the poor benighted human to the ground and dancing on his person with their sharp hooves, leaving tracks from one end to the other. The peacock, of course, was mixed up in the middle of them, squawking and flapping his big wings.

Finally, the wad of horseflesh got away from the man and he was able to crawl to safety, battle scarred and filthy but with no broken bones or major contusions. The colts wore themselves out tugging back and forth, falling down and finally, gasping for breath and dripping with sweat, they gave up and stood still.

The peacock? Well, he shook his feathers and casually strolled away like a boss, just like that’s how he meant to land, albeit a few feathers short and missing a substantial part of his magnificent tail. Yep. Stuck that landing.

(Author’s note: I in no way advocate the leaving on of halters or the dragging of halter ropes, but I know many who use this method.)