On The Job Colt Training

The first day on the job on any outfit is always kind of exciting, kind of scary. You’re in new country, new people to work with, and on a cowboy job, a new string of horses to get to know.

My new string of horses on the New Mexico ranch I’d just signed on to included green colts, spoiled young horses and one broke horse. The spoiled older colts, technically, would have been called the rough string as they had been messed with by someone else, had not worked out and been turned back from a string. They’re not usually turned back because they were too sweet and kind. Also, no one filled me in on any of the various idiosyncrasies of my new partners. It was a learn as you go type of job.

So, that first morning, at first light on a brisk winter day, my string was pointed out to me with their name’s spoken. One of them wasn’t named, but I was told I could hang a permanent name on him.

I decided to ride the leggy, sorrel colt with no name. I got him cornered up and caught, he saddled okay for a green broke colt, and since I was born cautious, I thought it would be a good idea to step on him in the pens instead of out in a rough, brushy pasture. He was grabby and didn’t know anything, but didn’t offer to buck. I warmed him up a little while everyone else finished saddling. I could spank him a little to get him moving, geehaw him around and get him stopped so felt he was ready to go. We loaded in the trailers to go brand a bunch of the registered calves out in a pasture far from headquarters.

The pasture was choked with cedars, mesquite, prickly pear shoulder high and cholla that was 10-12 feet high. The prickly pear and cholla would definitely bite and mesquite has thorns too, so it was quite a deal herding this colt through all that and still gather cows and calves. Did I mention rocks? Yes, there were rocks up to the size of a 60s era Buick, standing on end.

We got the pairs into a fence corner and the pit was dug and fire started with the readily available dead mesquite and cedar. Those old horned cows weren’t too trusting of our intentions, so it took some time to get them to settle in that corner. The worst of the rocks and cactus were grubbed out of the branding area with a shovel while the irons heated.

Me being the new guy, I got to hold the herd in the rodear while the older guys necked the calves out and slowly walked them to the fire. A ground crew flanked each of the calves and read the horn iron number off the cow so the guy tattooing the ears could get the right number on the calf. Those Hereford cows sure enough got close enough to read the numbers but no one got poked or rolled around.

My colt got a little handier at moving out and turning as we worked to keep those cows in the bunch. They weren’t wanting to stay, but between me and another guy or two, we held them. I was sure getting tired of peddling and geehawing, but my colt and I were holding up our end.

When the last calf was worked, the horseback crew warmed our feet around the fire before it was put out and everyone got mounted and headed back to the far end where the trailers were.

We trotted through the brush and rocks and arrived at the trailers. I stepped off my tired colt and turning to him, rubbed him on the forehead and said out loud “I dub thee Teddy, you Rough Rider”. Old Pete was close to me and he chuckled, as he understood the reference to Teddy Roosevelt’s Rough Riders of yore. Teddy had a trot that would dislodge rocks a quarter mile away, so it was a perfect name for him.

We loaded up and got in the pickup. I was in the middle next to Pete who was driving. He asked me how I got along with the colt. I said he did pretty good, just green. Pete said “Yep, not bad at all for his first outside ride.” 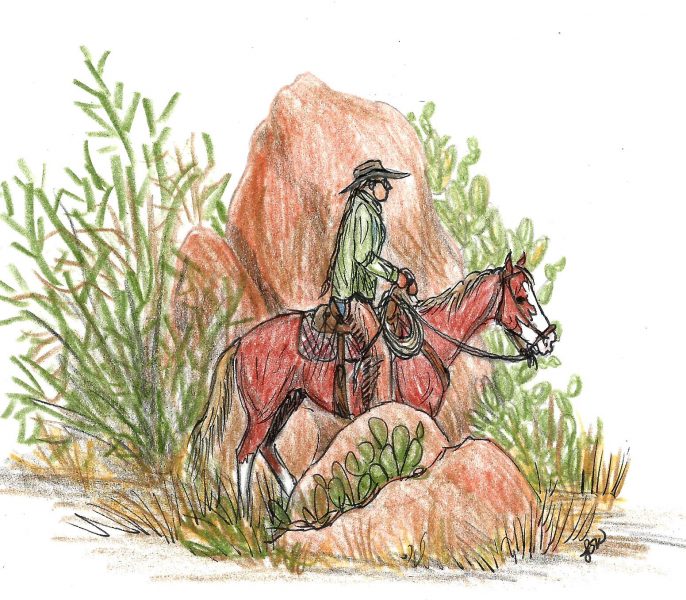