Old Methods Are New At Horsemanship Seminar; Part 2 of 3

The two day seminar held at Gary Crowder’s Arena between Billings and Huntley, Montana covered applied kinesiology techniques, nutritional and organ evaluation reflex points, parasite and ulcer detection and remedies, how to move energy blockages, discussion on how common misguided feeding practices hinder top performance and mental blocks that people put up for themselves and in turn, their horses.

In regard to people, Golob says “People want to be right or healthy. Core beliefs keep people from changing.” The health of people and animals is a three legged stool, according to Golob. Those legs are: structural, chemical and emotional.

Structure is simply the body and what it is comprised of.

The chemical aspect is about diet and what is actually in food. Golob says “Our body is in charge of the chemical balance and wants to survive but it can only do with what you give it to work with. One needs to keep learning and studying to improve diet and environment.”

The emotional aspect, directed at humans, is all about attitude. The victim mentality, why me, and why do things happen to me thinking drains one’s energy and has to be changed to see improvement in other areas.

Day one of the seminar had class room time where Dr. Golob explained that muscle testing is derived from ancient systems, developed in the Orient, of accupuncture and the meridian flow of ki or chi, which is life energy. The system is based on the idea that any stimulus, whether physical, chemical or emotional is either positive (strengthening) or negative (weakening) to the body. Muscle testing is used to find where there are problems or blockages in the body.

Golob demonstrated how to check for a body’s polarity (balance) and explained that a person’s right side is positive and your left side is negative. If your polarity is reversed, one’s muscle testing or any kind of energy work won’t be accurate. Things that can reverse a person’s polarity is travel in a car or plane, computers, cell phones, fluorescent lights, drugs or chemicals found in coffee, tobacco, prescription drugs, cleaners and chemicals of any kind. He also pointed out that any metal that crosses the mid-line of the body can affect polarity. Examples given were glasses with a metal bridge, braces, permanent retainers, and even underwire bras. Other things that can reverse polarity include an acidic diet, strident music, and geopathic zones.

When people or animals have reversed polarity, they generally don’t like to be touched or hugged and they don’t perceive or process information correctly. The simplest way to rebalance a person or horse’s polarity is to stroke from right to left, from just above the right eye to the left eye, three times with the index and middle fingers of the right hand. This method can be used several times a day and can’t do harm if it’s over done.

The seminar moved outside in the afternoon of the first day and the lecture and demonstrations moved to working on horses. The first horse was led forward and the owner explained that the mare was cranky, didn’t like being touched and would nip and kick if provoked.

Upon looking the mare over, Dr. Golob pointed out the uneven hairline on her hooves. “The hairline should be even. No hoof, no horse is a fact. Unevenness is not only a sign of poor hoof maintenance but can indicate other physical problems,” says Golob.

Regan Golob first cleared her polarity by doing the three strokes on her forehead. He then worked through various tests and determined that she had a headache that caused her to be tense and cranky. He worked to release that meridian point on her poll to give her relief, his persistence and patience paying off with her finally relaxing and working her mouth, obviously relieved. 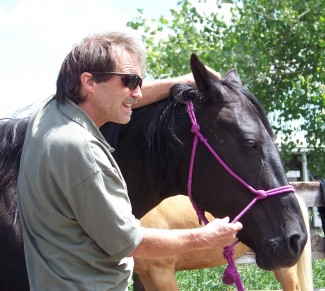 Golob gently works on the meridian point on the black mare’s poll.

The Bladder Meridian is the longest meridian in the horse’s body. It runs from just above the eye, over the ear and full length of the body, down the hind leg and ends at the Ting point on the coronet band of the hind foot. When he did this test, he was careful to protect himself from a possible kick, but the mare didn’t move.

Dr. Golob puts pressure on the association point on the mare’s chest. He calls this point the “breaker box” of the horse’s system.

It was determined that the mare had ribs that were sore, ovaries that bothered her, and general muscle/skeletal stiffness. After working over these areas, she was visibly more relaxed and calm.

He then went to the stress relief zones which involved four exercises. He listed them as the bum tuck, back lift, wither lift and telescoping neck lift. The bum tuck was done by standing directly behind the mare with a hand on each side of the upper quarters, he put pressure on the little indentations where the hair meets skin on each side of the anus and with pressure on the circulation point on the bladder meridian, the mare tucked her butt up and stretched her croup muscles and spine. Next he moved to the back lift, and with finger pressure midway up the group, he caused her to hump her back and stretch her spine from the hips forward.

The wither lift was done by pressing on the point centered on the girth, just in from the horse’s elbow, thereby stretching the withers and ribs. The neck telescope involved crouching in front of the mare’s chest, with his head on one side, and lifting up and forward on the muscles just in front of the shoulders, until the mare relaxed and arched her neck over his shoulder with her jaw against his back. 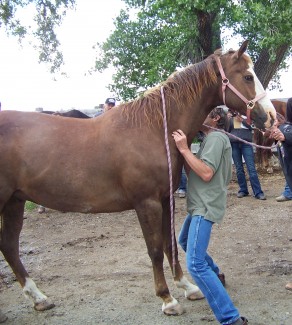 The neck lift is shown being done on a different horse.

When Dr. Golob completed the demonstration and adjustments on the mare, she was very relaxed and acted half asleep. He went back over her bladder meridian and found nothing blocked or stressed. 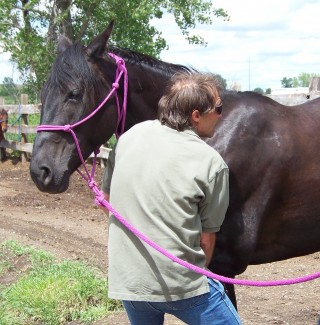 The black mare had a rib “out” and Dr. Golob manipulated her forearm and shoulder to put it back in.

Demonstrations and treatment were performed on several more horses and relief was obvious in all of them. 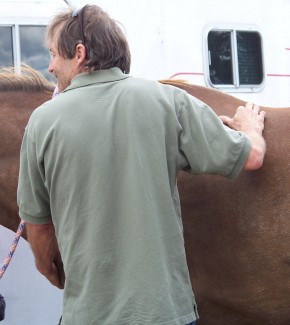 Dr. Golob has his left hand on the association point and his right hand on the liver point on the sorrel horse. This horse had been acting lethargic for a long time, but after being worked on, was visibly more alert and interested in his surroundings.