The number six barrel racer in the world is aboard a special horse.

Shelley Morgan rides “Kiss,” a six-year-old sorrel mare whose registered name is HR Fameskissandtell, and who is all woman.

Shelley’s had great horses before, such as one named Short Go, who she rode at the 2009 National Finals Rodeo. And she knew Kiss was a lot like Short Go.

“After a week of riding Kiss as a three-year-old I told my husband (Rex) this horse feels the most like Short Go of any horse I’ve ridden since he died in 2010.”

Shelley bought her, then futuritied on Kiss as a four-year-old, taking her to a few rodeos as well.

In 2019, she took the horse on the rodeo trail towards the end of the summer, winning Salinas, Calif., before heading home.

This last winter, they went to San Antonio, Ft. Worth, and Houston, and as Kiss ran more and more, she matured, putting Shelley into the top ten in the world standings.

“She’s definitely a big old diva mare,” the Eustace, Texas cowgirl said. “She’s all woman. She loves people, just loves people, and always has. The more they pet her, the better she likes it.”

But she also has her irritable moments, too. “She’s kind of grouchy. She knows she’s somebody, she knows she’s queen of the place.”

The mare is a sorrel, but in the spring and summer she develops white spots that make her look like an appaloosa, Morgan said. The spots used to go away in the winter but now they stay all year.

She does not like loud noises, including fireworks, and when she and Morgan go to the bigger outdoor arena rodeos, Morgan brings a horse for her to pony with. Kiss doesn’t necessarily need her, but for the big outdoor rodeos, she is “exposed to the rodeo the whole time and she gets a little upset.”

Kiss is “turny,” Shelley said, and does better if she can see the arena before she runs, Shelley said. She likes to “walk her in the arena and see her surroundings,” she said.

In mid-August, Morgan and her husband decided to bring Kiss home for awhile and give her a break. She’s young, Morgan said, “and I didn’t want to throw too much at her. She did so good in July, I wanted to give her a few weeks off. I want to keep her together. I don’t want her to be a horse one year and the next year she falls apart. I still want to have an awesome horse next year.”

At home, Shelley can see her right outside her living room window, and she doesn’t like to go on vacations, because she’s separated from Kiss and her other horses. “I don’t like somebody else to take care of my horses,” she said. “I like to see them every day.”

Kiss can be a handful at times. There are times Shelley calls Rex to help with her, like in Phillipsburg, Kansas. “She was acting so bad out back, Rex helped me.”

“She’s sweet but she’s definitely full of herself. She’s a good girl. We love her to death.”
Video courtesy Brooke Boyington. 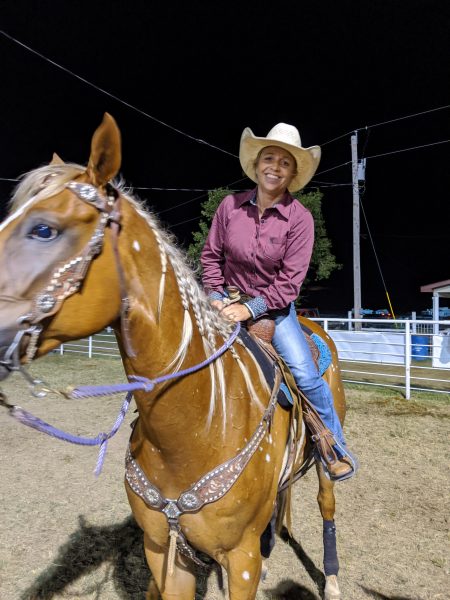