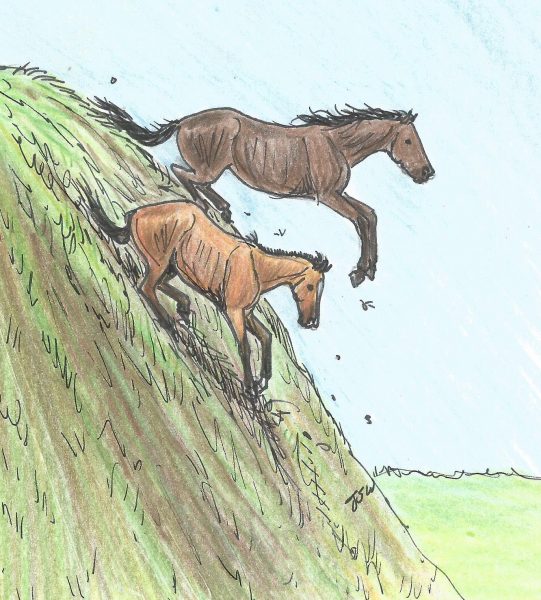 My Dad’s “horse of a lifetime” was a good homebred buckskin gelding named Reno. He was fast, cowy, a cat on his feet, and smarter than he sometimes needed to be. He was sired by the ranch stud Mack, who was a close up Peter McCue bred horse, and out of a good Thoroughbred mare. Reno was the real deal. He was also a gate opening booger, and all the corral gates had latches that the average person had to study on to get open.

Reno had found one not latched quite right and had turned himself out into the pasture south of the house. In that pasture was a gigantic Thoroughbred mare named Satin, a one eyed pony that belonged to Dad’s friend Pete, and an addled colt that was about two years old and didn’t see really well.

I suppose Dad deluded himself into believing that he could just drive out there and either catch Reno or trot those horses back into the corrals, so he invited Mom and I along. I was little enough that I stood up on the seat behind one of their shoulders for this outing. It was late spring, the grass was green, the gumbo was soft and the creek bottoms had been flooded several times, so they were not drivable. This pasture had two creeks in it. Hammontree from the east joined up with the ever boggy Jug Creek that wound around through the meadows. The ranch road crossed Jug Creek on a bridge.

Reno and his cronies decided right away that it would be way more fun to have a horse race than to go back to the corral. We were in the ’63 Dodge Power Wagon four wheel drive pickup, probably with chains, and it started getting pretty rapid. My Mom was gutsier than an Army mule, but after being slung around in the cab and going faster and faster, she asked that we be let out of the race when we went by the house. I remember her getting out and reaching for me, but I had sidled over behind Dad’s strong shoulder and wanted to stay with him. He must have assured her that I wouldn’t die or something, because I got to stay with him.

Dad had a temper that could light a box of matches at 10 feet, so I’m surprised Mom allowed it, due to some of the language that might have been used toward the insubordinate horses, besides the relative danger of an angry man and a nearly unstoppable pickup.

Away we went through the mud in hot pursuit of the the horses. Reno and Satin were really flying as we crossed the bridge again, then up the hill to the big flat south of Jug Creek. Dad poured it on, hoping to turn them before they got to the end of the bluff that dropped off into Hammontree Creek. I don’t know how fast we were going, but the gumbo was flying up in the air behind us and I had my little arm around Dad’s neck to hold on. Reno was smart enough that he knew what Dad was trying to do, so he grabbed another gear, along with big ol’ Satin, and I mean it was a race! The one eyed pony and the dippy colt were trailing a ways behind them we soon passed them.

There was a trail road that went across that flat and dropped off above a steep cutbank down to Hammontree Creek. Dad knew if he didn’t head them off before then that they’d go off that hill and be across the boggy meadows and he’d be out of luck, so he floored it.

It was a photo finish to the edge of that bluff, and he locked it up and slid sideways to a stop before we went over. I remember, clear as a bell, seeing Reno and Satin never slowing as they went off that bluff. Satin jumped as she went off, Reno slid off on his hocks, and they both landed easily and ran on. Oh my, not the one eyed pony and dippy colt though. The pony must have been keeping his one eye on the maniac in the pickup, because he never saw that bluff and went over it, somersaulting to the bottom. The colt flew off and landed on his back, leaving a dent in the mud. They staggered up and tried to catch Reno and Satin.

Dad finally ran out of words and descriptive terms and we headed back to the house. I’m sure Mom had stood out on the hill by the house and watched, wondering what had possessed her to allow me to stay with Dad. I, of course, was too little to be aware of any danger, especially when I was with my Dad, and had had a rip roaring good time, squealing with delight as we vaulted over gullies and drifted the turns during the race. It prepared me, no doubt, for coyote hunting with my brothers later on.