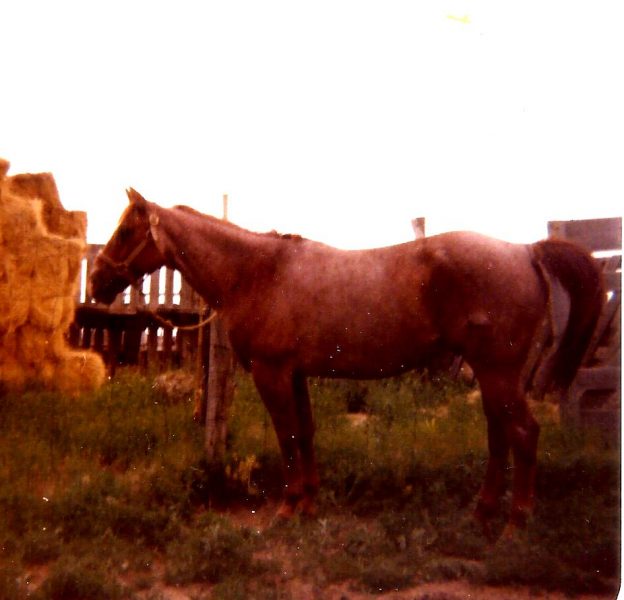 Late in my high school years, I was short of horses for my summer herd cattle job. A friend said he had a little red roan gelding for sale that was tough as boiled owl, honest and could really walk. I always liked a fast walking horse, so I was interested. I took the horse to try.

The owner called him Moose, as his head wasn’t exactly refined. He was about 14.2 hands, stout made, and he could sure walk. He was snorty acting on the ground, but harmless, didn’t like being fussed over and was all business. I tried him for a week or so and wrote the man a check.

Moose was way different than my usual tall, leggy horses. His pedigree was pure Rez pony. His sire was a Thoroughbred, his mama a little Rez mare. I could probably outrun him, but he would give me all he had when I asked and he was indeed tough and never quit me. He was stout on the horn and very cowy too, so a pretty nice horse.

My horse that I had planned to high school rodeo on was hurt, so Moose got hauled to town for the first time as a barrel horse, of all things. I’d practiced some at home, so the pattern was familiar, if bewildering, but he’d never been to town. He gawked around at the sights and sounds.

The bareback kid glanced down at his gear bag and realized that he’d forgotten something he needed, so, without asking me or Moose, stepped over, swung on Moose, and instead of just riding away, he rared back in my saddle, planted his heels up in Moose’s neck and let out a squall. I was momentarily frozen in place but Moose wasn’t! Moose went airborn so fast and so high, and came down so hard, that the dumb kid was launched into the air and then firmly injected into the packed dirt at our feet. Moose had barely moved out of his tracks.

The kid finally got up amidst our laughing, said something unflattering about Moose, and limped off to his car. Grinning, I stepped on my good little roan gelding, rolled him back over his hocks and he hit his neat walk back to the pickup. I was still chuckling over the deal. I swear I heard Moose chuckling too.

Later that summer, I was cutting across a pasture next to my folks’ place when I spotted a dogie lamb on the wrong side of the fence. The lamb was thin and potty, living on grass and water with no mama. He needed to go home to the bum pen for better groceries.

The lamb was wild as an antelope and it took a couple of loops to get him caught. I got off Moose and walked down my rope and caught the lamb, intending to pack him home on Moose. I picked the lamb up, pulled the loop off his head, and started walking back to Moose. Moose let out a big roller, and pointed the near ear at me, cocking his hind foot. He was telling me clear as day that he wasn’t in favor of my plan.

I’d packed a couple of calves on Moose that spring without him being concerned, but, he drew the line at packing a sheep, even a small one. We discussed it for a bit, me thinking I could talk him into it. He increased his level of “no you ain’t” and had his tail clamped, telling me that he wasn’t going to pack that lamb.

I was determined to do so, especially since he made an issue of it. Then, a little voice in my head reminded me of just how effectively Moose could rid himself of a person taking unapproved liberties with him. I looked at Moose. He was promising mayhem.

Wisely, I pulled a piggin’ string off my saddle and tied the lamb to a fence post. I led Moose away and then, rubbing his neck, I sweet talked him into letting me back on now that I was free of the lamb. He rode off stiff legged and humpy, but finally eased into his fast walk, and we never spoke of him packing a lamb again.