Mommy, You Saved Me! 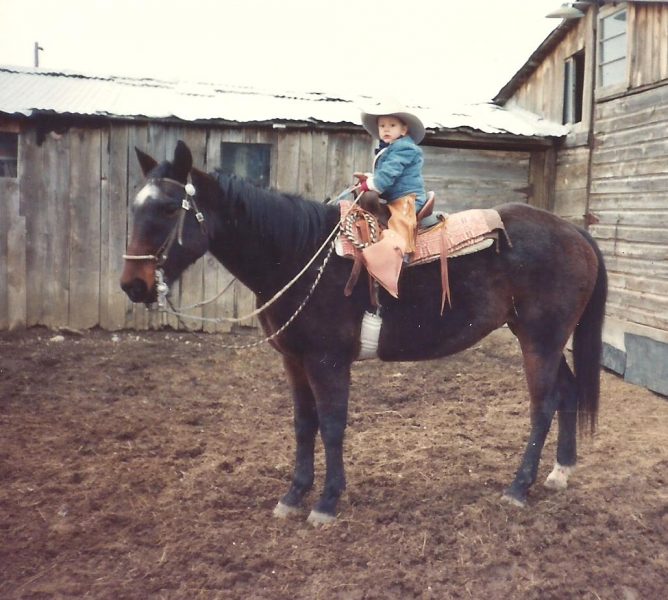 Colin and Lobo the winter before the cattle contract started.

When my son was three, my husband and I took on a cattle contract. We had charge of about 4000 yearling steers and 750 mother cows. The yearlings were about evenly split between two summer leases 25 miles apart, and the cows were on the lease closest to our headquarters. We started early and quit late, seven days a week.

Colin was little, but he was tough, so he went virtually every day. I led him on an old warrior of a saddle horse who was 28 years old. Lobo was sound but stiff, and grained up to where he thought he was four years old and bulletproof. We made some really big circles, to the tune of 20 miles a day or more, and never had a complaint from Colin. He was always rearin’ to go the next day.

One morning Colin and I were making a circle around a smaller pasture to push the steers from there into the bigger one and shut the gates. We had to make sure we got everyone as that pasture didn’t have a dam. We started at first light and it was pretty cool, thus we were wearing jackets.

The steers in this bunch were a trotty, high headed lot and not very herd oriented. So, naturally, one brockle faced steer decided that just following the others was a bad idea and that he ought to head out on his own at a long trot. That wouldn’t have been a problem if I was riding on my own. I’d have just loped out around him and pointed him back the right way. But, I had an old horse and tiny boy in tow, so we had to catch up, get past the steer and get him turned without getting too much speed up.

The stretch of ground we were on was intermittent cactus patches and head sized rocks, so the horses had to pick their way through it to get past the steer. I was trotting as fast as Lobo could trot through this mess. Colin was doing all right at the trot and we were gaining on the steer a little as we cut across.

Suddenly, Lobo broke into a lope. He was so stiff with arthritis that the shift to a lope was a hard transition and his lope was rough. Out of the corner of my eye I saw Colin literally clear the saddle. I set the parking brake on my horse and reach over and caught Colin by the oversized fleece pullover he was wearing and, as Lobo had also pulled up, plunked him back in the saddle, smooth as you please.

My heart was in my throat at the thought of him hitting the ground in all those rocks and cactus and maybe being stepped on. I was so relieved that it didn’t happen, that I had to just sit a moment to breath. Just at that moment, Colin looked over at me with a big smile on his face and said “Mommy, you SAVED me!”

Oh boy, thank God I did! And yes, we did get the steer brought back and through the gate.