We’d bought a place back in my home country that was right along the county road. Just across that road was a pasture that my Uncle Paul owned. He wasn’t really blood kin, but, he’d always been Uncle Paul. He was a stock contractor. During the summer he ran his bucking horses in that pasture across the road and sometimes laid bulls over there as well.
The first winter we were there, Uncle Paul asked me if I’d help him feed his bulls if he left them in that pasture for the winter. It would be pretty handy for him as he’d bought a stack of hay that was on the place we’d bought and it needed fed up. He was so badly crippled up that he could hard get around, so getting me to not only pitch the hay on the flatbed pickup but feed it off as well was a dandy deal for him. It wasn’t going to hurt me any and I’d get to spend some time with him, which was always good.
He drove the 40 miles over from his place every other day. It had turned winter time pretty early and there was already a lot of snow on the ground. The stack of hay was awful with mouse chewed strings, single strings, doughy bales and ice holding them all together. It wasn’t bad hay, just terrible to handle.
Uncle Paul and I pitched the first batch on and got back in. On the way over to the pasture he started telling me which of those bulls to watch really close, which weren’t too bad and all that. There were a couple in the bunch that were just plain dangerous and he warned me to never take any chances with them. I was trying to memorize the bad ones as he was driving out to where he wanted to feed. I got out and started following the pickup in low range, scraping and pitching the hay off. I’d have to grab the twine too and pound the ice off of it when it stuck to the hay. The snow was about six inches deep on that flat and under it was frozen cow (bull) chips, plus rocks. Walking along unable to see the ground, keep the hay flowing off, grabbing twines and keeping my eye on the two worst bulls kept me pretty busy. The bulls were hurrying over to the hay so they weren’t paying much attention to me with a buffet being served.
I had about 100 yards of hay strung out when I felt a presence close to me. It wasn’t touching me but I just knew something was there. Suddenly, on each side of my shoulders was a horn. A big head, with those horns mounted on it gave me a gentle rub up the back. I whirled around, ready to defend myself with the pitchfork, and got a good look at my attacker. He was just standing there, looking at me with gentle eyes. He reached out and licked my coat just below my chin. Lordy he looked big! He was sure pretty though. He was white with a dark red brindle cape from back of the shoulders forward. His feet were black with black spots on his lower legs, and his eyes, muzzle, ears and tail were rimmed with black. He had big Brahman ears and a bit of a hump. 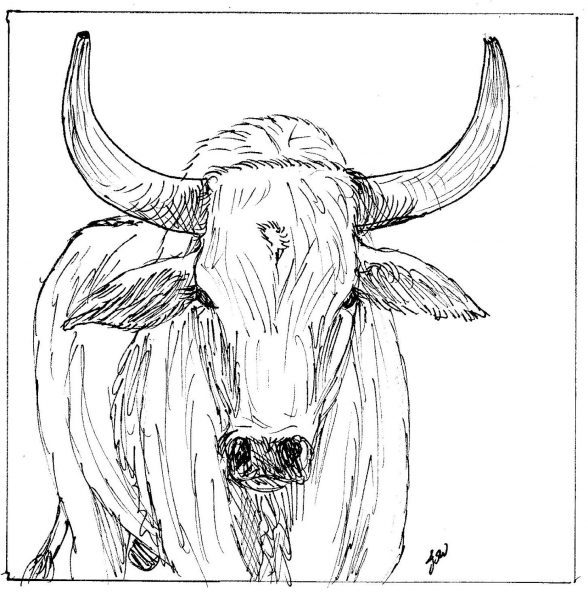 Uncle Paul had stopped the pickup when he saw no hay being pitched. He started laughing and said “I forgot to tell you about Quigley. He’s gentle as a kitten and just wants petted.” My heart had returned to my chest by then, so I scratched the bull’s ears, around his horns and his neck. That seemed to be just the ticket and he started eating hay. I finished feeding and when I got back in the pickup, Uncle Paul explained that his daughter had raised Quigley on the bottle. Quigley was certainly gentle and loved people. He was also a talented and hard to ride bucking bull, but wouldn’t so much as blow snot at a bull rider or a bull fighter. He was just a pet.
Feeding hay to those bulls all winter was interesting, as there were two bulls in there that would hunt you down in contrast to the big pet, Quigley. I preferred Quigley by a wide margin, to say the least.