It’s foaling season for many people and if you are foaling mares, you have probably had occasion to milk one to get a foal started with a bottle. As you have noticed, the “handles” are pretty short on a mare and even if she is 100% cooperative, it’s a back breaking, slow process.

Some years ago when I was going through this during foaling, a very good horse vet friend, who also raises horses himself, gave me a great tip to milk a mare fairly quickly. I’ve used it on multiple mares, some dog gentle, some a bit ouchy, and have never had a problem.

Keep in mind, when milking a mare, that in the hours after foaling, milking her will cause her to have uterine contractions that can be very painful to her. She might just give you a swat since she relates what you’re doing with that pain. This is most common in first foal mares who have never had the whole experience before. Don’t let your guard down, but move slowly and keep contact with the mare at all times, so you can feel a change immediately. I like to be on the mare’s left side, right shoulder pressed against her hind quarter as close to the stifle/flank as I can get, my head pressed into her side ahead of the flank. I will make firm contact with the mare’s udder, handling it until she relaxes, before I ever attempt to milk her. I will then stimulate the milk letdown by gently squeezing the teat between my index finger and thumb.

Once milk has streamed out, then I am ready to use my handy milking device that I have previously prepared as follows: Using a disposable 60 cc syringe, pull the plunger completely out first and set aside. With a sharp knife carefully cut the tip end off of the syringe just above where it necks down to go into the needle. Smooth the edges after cutting so that you don’t scar the rubber seal of the plunger. Put the plunger back into the cut end, leaving the smooth, uncut end open and depress it to within an inch of the smooth end. 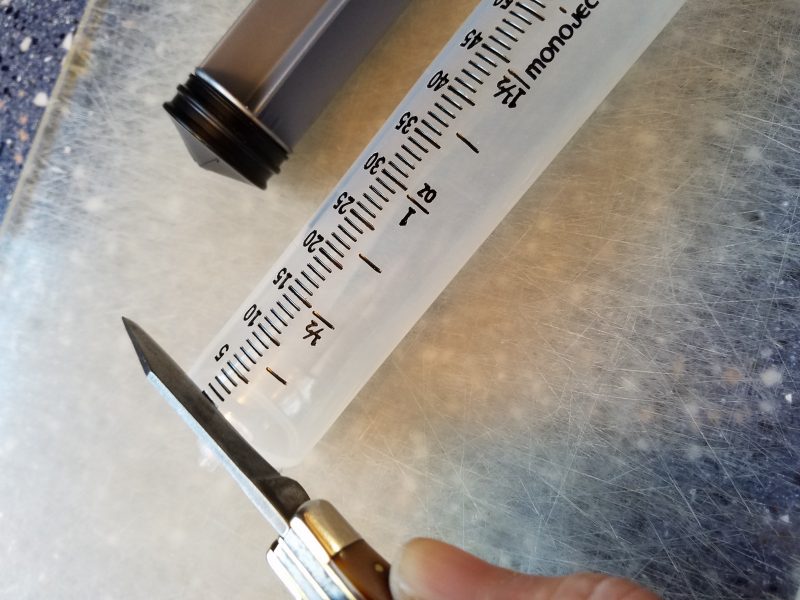 Carefully cut the tip off of a 60 cc syringe. 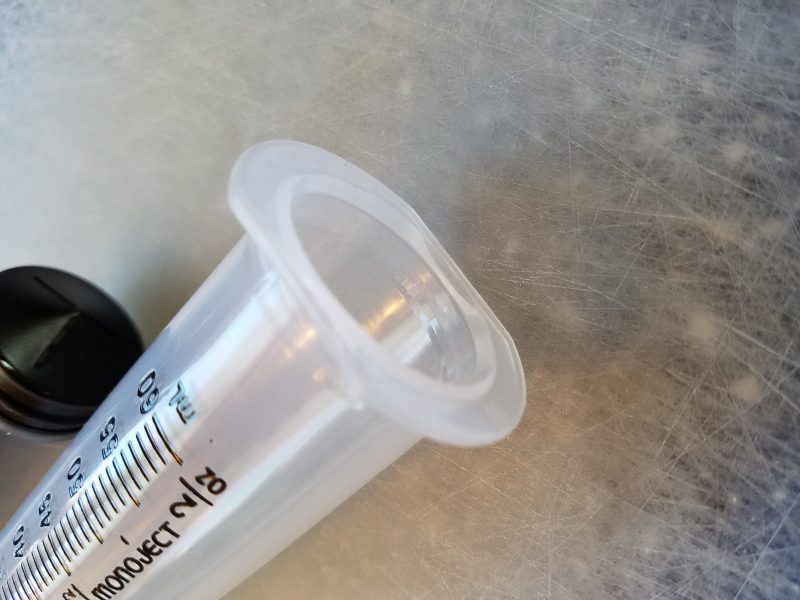 Place the smooth end of the syringe against the mare.

Once you have desensitized the mare to having her udder/teat handled, squeeze enough milk out to thoroughly moisten the skin around the teat and the smooth end of the syringe. Place the syringe tight against the skin around the teat and gently draw the plunger back about an inch, drawing the teat into the cylinder. Using a rhythmic “suckling” motion, start drawing the plunger back, thus pulling the milk into the cylinder. You’ll get the hang of it quickly and be able to hold the syringe and draw it back easily. Keep your head in her flank and your shoulder against her stifle so you can feel the first sign of her moving.

I like to have a preheated bottle ready to put the milk into (full of hot water, dump it when you’re ready for the bottle, and tucked into a coozy or glove to keep the milk warm), and once I have two or three syringes worth, I’ll go ahead and give it to the foal while the milk is still warm. A foal doesn’t really drink a lot at one time when they are first born, so getting even 180 cc’s of milk/colostrum into the foal is enough at first. If the foal doesn’t nurse on it’s own within another hour, you’ll need to repeat the syringe milking until it does.

If I have a mare that gives an excess of colostrum I will take some of the extra to freeze and using this syringe milker makes that so much simpler.

I thoroughly wash the syringe after each use so as not to taint the good milk being taken from the mare for the foal. I hope this little tip makes your stressful foaling crisis time a little easier.