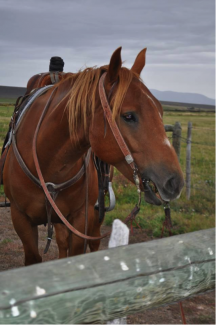 Kidd, working on being a working horse.

A few weeks ago we moved a group of cows back home before shipping. The trip itself involved a trek down several miles of busy highway, through lots of traffic with about 300 pair. At various points there were 20 cars backed up in front of and behind the cattle with guard rails on either side–talk about claustrophobic! Then you add the horses and dogs that were zipping in and out of cows, cars, and semis— not the most relaxed move I have ever been on! On one occasion, a car zipped by my horse and dog so close that may aunt swore (not something you hear very often), ran up on the highway to stop traffic, and suggested that I rope their rearview mirror and tear it off next time—if only I had been a bit quicker!

On this particular trip, I chose to ride my gelding, Kidd. Now Kidd is broke, he is completely willing to do anything, but he hasn’t had a lot of working experiences. I would say he’s on his way to being a working horse, but isn’t completely there yet. After this day, he was closer.

After about six hours of moving cattle down the highway we had almost reached the ranch. In the meantime, however, I had left a sick, lame calf behind because he had been unable to travel (or at least we assumed he was unable). When we went back to grab the calf, he was lying upside down on a hill and breathing rapidly. My aunt and I jumped out of the truck to grab our horses. Before we could get them out of the trailer, the calf jumped up, took one look at the driver, who had also stepped out of the truck, and ran straight at him. Laughing, we got our horses out, but before we could get on, the calf turned on my aunt, who dodged him just as he ran under her horse’s neck.

As we were getting onto the horses, a little white car pulled off the road. A sweet old lady dressed from head to toe in the brightest possible fuchsia pink outfit (complete with sequins), stepped out of the car. She had clearly not watched the events that had just taken place and walked over to stop the calf that was beginning to jog down the highway. Despite her good intentions she was greeted by all three of us screaming at her to get back into the car. The image that flashed across my mind of the calf sending her tumbling down the steep hill next to that car was much worse than that of her hurt feelings. Only after she drove away did we have a chance to feel bad for chasing her off.

After we got ourselves together, I went to rope the calf. He let me get close enough to rope him, but rather than jumping away as my rope went around his neck, he ran straight through my loop and charged right at Kidd, who I’m sure was wondering how on earth he was supposed track the calf if it was running right at him. Eventually we did catch the calf, but then had the issue of dragging him back up the rocky, sagebrush-filled hill and into the trailer (keep in mind this is a calf in October, not some little baby in April). We had no choice but to put the rope on his feet and drag him up the hill—no better way to teach a horse to pull hard! Then because the front of the trailer was already full, we had to run the rope through the trailer and then dally it back to the horse.

As Kidd was pulling the calf into trailer I realized… THIS is exactly how good working horses are made. Those long days, where unexpected things happen, and the horse just has to get the job done. Those days in the arena working on skills are great and necessary, but they just don’t present the same kind of learning experiences for horses or for riders.

I grew up on a 5th generation family cattle ranch in Western Montana with 3 brothers and a very large extended family. Horses have been a part of my life as long as I can remember. They are my passion and I have been fortunate...

View all posts by Erica Mannix