I’ve hit the road a lot this year. I’ve been taking Cosmo (DX And The City), my home-raised 5 year old, with me to make her into a barrel horse. This series will share how that’s going, what we’re doing, and my tips/tricks for getting them good on the road.

I’ve been riding my home-raised mare, DX And The City (“Cosmo”), for about a year and a half now. All summer, I hauled her with me to rodeos, just to see the sights. This mare got a late start in life. Her first rides didn’t come until  Spring of her 4-year-old year. I would catch a ride here or there, but I didn’t get to ride her near as consistently as I’d have liked.

Fast forward to now – Spring basically flew by. I was dealing with a sore barrel horse. He required trips to the vet 200 miles away, and a farrier in another state. Sigh. Cosmo wasn’t used on the ranch as much as I had hoped. By late May, I was able to ride her at the first branding I got to attend that spring. In June, at our first of two brandings, I rode her for the gather, and then I got to heel a few calves on her.

Our first-calf heifer branding is usually a head-and-heel branding.  If you’re starting a young horse, riding it at this branding is a good idea because they can heel a little one. It’s not terribly hard work. Plus, they get used to the commotion of the branding pen and, holding a live critter on the end of the rope. 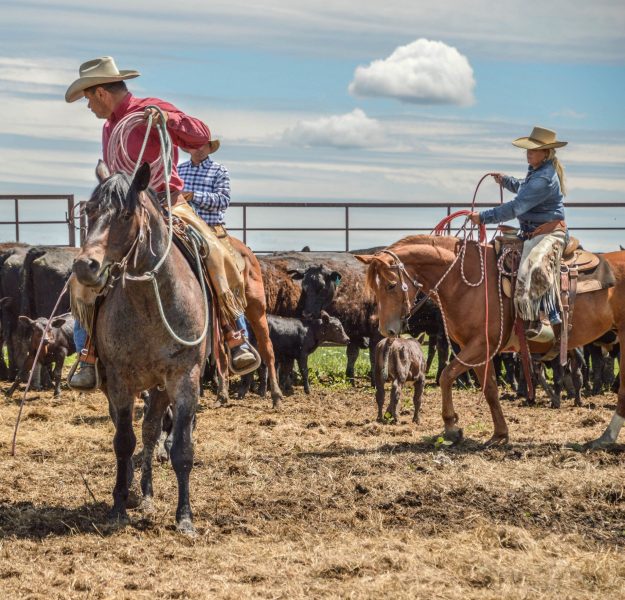 Cosmo did a great job that day.

Overall she’s been coming along nicely. In her first few outside rides, she balked at a bog, a creek, or snorted at a cow coming her direction. Other than a handful of times, she has taken everything I’ve thrown at her with incredible willingness. She’s never offered to sell out on me. At one rodeo this year, the stock contractor asked if I’d help move the bucking stock. Momentarily she considered running with those big, soggy buggers, but I was able to talk her out of that idea. After we got them moved, we sorted them. She plowed through there like an old saddle horse.

Making a barrel horse isn’t just about running barrels on them. To me, it’s about teaching them to go where we want, when we want, at the speed we want.

In the next few episodes of “Making a barrel horse”, I’ll also be showcasing Luna (Shesa Quick Dasher by Such Easy Cash), as we bring her along from a 60 ride 5 year old to a horse that is ready to exhibition.