Making A Point, Or Several, With A Bull

Anyone who has worked cattle much has probably dealt with bulls. They are a necessary evil that ranchers have to have on hand to be able to keep raising cattle, but they are, in general, a pain in the neck most of the time. They fight with each other, tear up fence, get hurt just when you need them, and a plethora of other aggravating qualities. Plus, a bull can be dangerous and unpredictable.

I’d been doing some other riding and it was nearly chore time when I got back to the corrals. I decided to just go get the milk cow out of the west corral on my way through to unsaddle. She was a squirrelly old rip at best, would take you when you walked into the corral about half the time, and didn’t see her role as milk cow as a priority in her life. So, riding a really good little mare, Button, I opened the gate and sorted her out of the bulls that she was sharing the corral with. She always had to hold a cutting contest but she didn’t stand a chance with that cowy little mare.

Button was not even 14 hands tall, but quick as a cat, and really broke. So, ol’ Spot got sorted out and put through the gate. I was going to just go put her in the pen by the barn and do the rest of the chores before milking, so left the gate open so she could go back to the corral when I was done.

I followed her around the north end of the barn and was about halfway down the long alley that was on the east side when one of the Charolais bulls came huffing around the corner and socked Button in the belly. We were a little surprised, not only at his arrival, but his attitude. I was instantly mad enough to kill a bull. I trotted on down the alley, reached inside the barn door without getting off and grabbed a pitchfork that was stood up just inside the door.

You have to realize that, though I was a high school girl, I was stouter than most men and had handled quite a few cattle. But, given that, it probably wasn’t the most brilliant idea I’d ever had to do what I did next. The bull was trying to herd the milkcow back to their corral, no idea why as she was not bulling or likely to, so I trotted the also irritated Button past the bull and cut him off. He turned toward me again and I skewered him on the tines of the pitchfork, right on his big, beefy neck.

Surprised, he backed off, but I didn’t! I stabbed him several more times before he gathered his wits about him and decided that I wasn’t as great of a target as he’d thought I’d be. We went down the alley, back into the pen by the barn and I was stabbing him on every stride and not letting him back through the gate. He was about a three year old, so was much bigger than Button, but she didn’t think about that either. She kept me right where I needed to be to continue his education on the folly of ever hitting a horse.

Finally, my arm got tired so I let him out of the pen and loped him back to the big corral where he should have stayed to start with. He was leaking red brain fluid out of multiple holes all over his body. Really showed up nice on his white hair. I re-sorted Spot out of the other bulls again, and made the walk back to the barn pen without any interference from anyone.

Though somewhat winded, Button and I were both satisfied with our contribution to the ongoing education of a bull. I’ll tell you this, he could darned sure keep his distance after that. He would hide behind the other bulls and whistled pretty softly no matter what was being done. 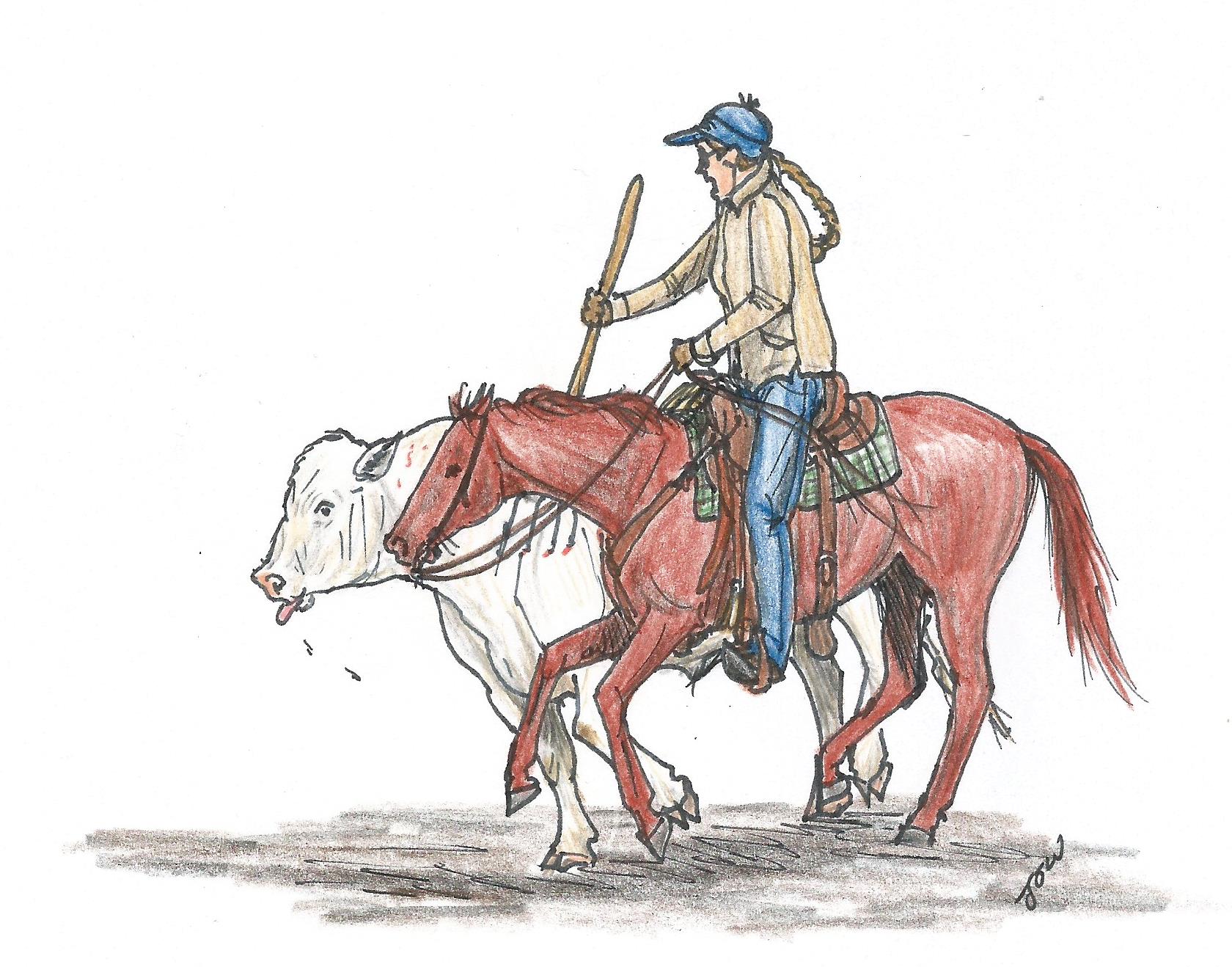