What To Look For In A Young Performance Horse Prospect: Part 1

When picking out a performance horse prospect several things come into play. In this 2 part series we’ll touch on what to look for and why.  We all know that a horse is only going to be as good as it’s trainer, but this might be helpful in getting a good start. 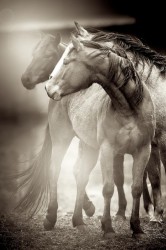 So Many Prospects To Choose From.

Bloodlines might be one of the first things a person looks at. Depending on the discipline you have in mind for this horse, bloodlines may help you in narrowing the field.  Barrel racers might look for something that has a little or a lot of running blood.  Ranchers might look for that foundation cow horse line.  Bloodlines are a good place to start, but often times you’ll see a stand out horse with nothing fancy on the papers. This is where we’ll dig deeper into picking out a good prospect.

If possible, when seeking a young prospect, I like to take a look at it’s family history. Does he/she have siblings, and what happened with them? I also like to know what it’s mother did. If she was a performance horse, I like to hear about her and how she was to train and what she did in the performance pen.  If she was always a broodmare, it is nice to know about her disposition.  Is she friendly and trusting?  Is she hard to handle? I even like to see how that mare travels.  I think babies get a lot from their mothers in the ways of disposition. A lot of times it’s that disposition that makes a winner.  Not that those babies can’t be handled and trained differently, but it helps to give an indication of what you may be working with.  We had a broodmare that chased everything small out of the pasture (dogs, coyotes, kids, cats).  She was raised on a big ranch, and never broke to ride. You could tell she’d had to protect her colts a time or two.  She was the nicest mare to handle though. She never put up a fuss and was always light on the lead rope.  Her colts were all the same way.  Stomp a dog in a second in the pasture, but cowy cowy buggers and so easy to train.  Just like her, they never let the lead rope go tight, and they were so light to pressure.

Many people say that if the mother was a performance horse stand out, the babies will be too. That’s not to say that the sire doesn’t play a significant role as well. For instance, we don’t often hesitate to breed our stallion to a mare that is a little on the wild side.  His disposition and ease of training always seems to push through.  He’s a thinker and a pleaser, and so far all of his colts are too.  But most of the time the colts out of those wild mares have few more quirks. The statistics are out there on most promoted stallions. Some breeders will tell you their percentage of money earners.  Even if earning money isn’t what you are after with your prospect, it’s nice to take a look at the parents to better prepare yourself for what may be in store.  It’s never a guarantee but it’s a good place to start.

Horses have been a part of my life since I can remember. Riding with my Dad as a youngster was what I lived for. There was nothing better than working cows, or racing my dad across an alfalfa field. It seems I never grew out...

View all posts by Jessie Salter