Lily and the Quarter Track

Many years ago, my son and I were moving a bunch of steers to a fresh pasture. My son was four years old and riding a borrowed horse due to his old partner having crossed over the divide the winter before. This borrowed horse was the top horse of our neighbors and they had graciously offered him to me for Colin to use. He was a dandy and took very good care of my little cowboy and could really cover the country, so we were doing great.

After we had gathered the steers, which wasn’t too hard, just a lot of country to cover, old Sandy the horse suddenly came up terribly lame. I mean, he was packing a leg lame. I got off and cleaned his foot out to see if he’d stepped on something, but could find nothing wrong. Poor old guy, standing there on three legs. I was very concerned too, that the borrowed horse might be permanently injured. We were miles from the trailer or even where a trailer could be brought closer, so, the only thing I could do was to tie up his reins and let him make his painful way back to the trailer, if he even could.

Meanwhile, leaving Sandy behind, I got Colin up behind me on my Lily and we got the steers moving and headed toward the gate. Sandy had stood in one place and watched us ride away. Still worrying about him, I glanced back before crossing a ridge with the steers and watched Sandy take off at a lope, bucking and playing, back toward the trailer. Miraculous recovery! Later I found out that this fake lameness was a stunt he had pulled on my friends’ big kids and that if they just got after him a little, he was healed instantly. Smart old booger. Well, too late now, we had steers to keep moving.

We got the steers through the gate without a hitch and we turned and headed back across the miles to the trailer. Lily could really walk so we were making good time. But, something strange started happening. She’d be walking along and pretty soon her hind quarters would start drifting to the left until she was doing a perfect quarter track behind. I’d put my leg in her and she’d straighten back out, but in just a few strides, she’d do it again. She never put an ear back or acted like anything was bothering her, but this hound dog way of walking was a little weird to ride.

I had corrected her over and over, but it kept happening. I glanced down to the left hind quarter, which was nearly even with her shoulders at this point and saw nothing out of the ordinary. I then looked to the right hind quarter and saw the problem. When I had taken on my little passenger, I hadn’t thought about his spurs. On the left side, my boot top medicine bag held his leg out far enough that his spur didn’t touch her. On the right side, though, his little spur was just under the edge of the saddle pad and with each stride, was digging into her ribs. 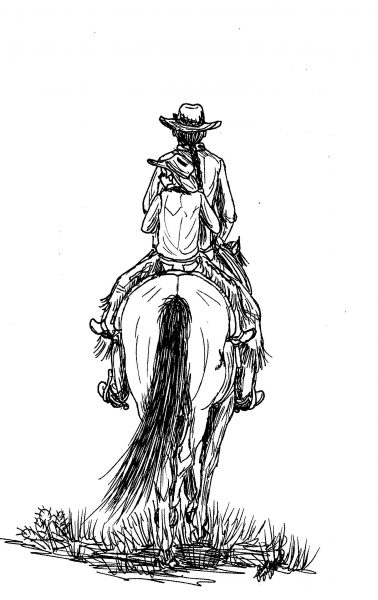 Lily’s hind quarters just kept drifting to the left, in spite of repeated corrections from me.

I stopped her and took his spurs off and hung them on the saddle horn. When I asked Lily to move out again, she did so in a perfectly straight line. She didn’t have an ounce of meanness in her or I think that endless gigging in the upper ribs might not have gone so well for us. I’ll bet she wondered about all that quarter tracking I had her do though! Also, Sandy was waiting at the gate closest to the trailer, perfectly sound.