Lark: Pretty Is As Pretty Does

He actually belonged to my sister who got him after she was going to college. Lark was an appendix registered gelding that looked more Thoroughbred than Quarter Horse. He’d run AA on the track before he got so hard to ride that no jockeys or exercise boys would get on him, thus ending his race career.
Lark had had 30 days of riding put on him after that, then my sister bought him. He despised men, loved women and even kids. Men had done him wrong at some point and he hadn’t forgotten it. At 16 hands and an easy 1300 lbs, he was an imposing horse. When his head went up in the air and he looked out of the corner of his eye, ear pointed and snorting, he wasn’t just fooling. So, the men of the clan didn’t like him a bit.
I was just a kid and started riding Lark when I was about 13 or so. He was fun to ride, with a big motor, cowy, and lots of power. He went to work as a ranch horse seamlessly and never hesitated to do a job when asked. So, in the years that my sister owned him, due to her college obligations and then losing interest in the riding world, Lark was ridden by me.
He’d been loaned out and got hurt when he got loose one night and fell on the highway, so was brought back home and turned out to heal up after the initial doctoring phase. I rode him after that for a while. Then he had hung a foot in the bottom wire of the fence and stood there all night, only panicking and blowing out of there when one of my brother’s tried to approach him to free his foot. That was a nasty cut and should have crippled him, but he never took a lame step and I spent the next eight months or so doctoring him. He and I were pards for sure.
When he was healed up and traveling well, I was short of horses on my summer pasture deal, so I got him in. He hadn’t been ridden in well over a year and was fat as a toad. He was never a pretty horse, but when he got fat he was downright funny looking. A blood bay, he had a long star and four white socks. All agreed he looked like a smaller Clydesdale of beer fame. Total strangers would make snide remarks and at the least, giggle at him. His belly would get huge on grass as he was a big barreled horse, so he also looked like he was about to foal.
So, I saddled Lark up for his first ride back even though it promised to be a gruelling day with many miles and cattle to doctor. I had viral pink eye in a bunch of yearlings and there was no way I could doctor that many cattle alone and ever stay ahead of it, so I’d asked my cowboss for some help. He sent a really nice, polite, shy cowboy named Bob to help me. Bob was a good hand and a fine human, but even he couldn’t help giggling at my obese horse.
It was muddy as it had been a steady rain for days ahead of Bob’s arrival. We set out to doctor 20 or so heifers in that mud. I know, it was terrible to take a fat horse and work him that hard, but I didn’t have anything that was tough enough to go but him. Bob was riding a really nice looking gray horse that was pea hearted. No try at all, just tried to skate along on his good looks I guess. So, when Bob headed one, I’d heel it, and he’d get off to doctor the eye. We’d traded back and forth heading and heeling, and the gray horse had been unimpressive on either end.
The gumbo mud was fetlock deep that day, and Bob had headed a heifer. Gray horse was holding the rope tight when Bob got off to doctor the eye. Lark and I were facing all of them. Just as Bob kneeled on that heifer’s neck, ol’ Gray walked up several feet, thus giving the heifer plenty of slack to get up. Seeing it, I shifted Lark in reverse and brought the ropes tight again. However, the gray horse had gotten jerked down in the process and his saddle horn was pointed straight at the heifer and Bob. Bob took his time doctoring the heifer, as Gray wasn’t going to get back up and give any slack and Lark wasn’t even laboring to hold it all tight.
After we’d let Gray up and had our ropes free, we were riding on to our next patient. Bob looked over at Lark and said “I’ll never, ever make fun of anyone’s horse again, no matter how much they make me giggle.” His other comment was “pretty is as pretty does” and that was a fact with Lark.
Lark was stout and tougher than a boot. That day he probably doctored 20+ head, went on about a 30 mile circle, and never acted like it bothered him at all. 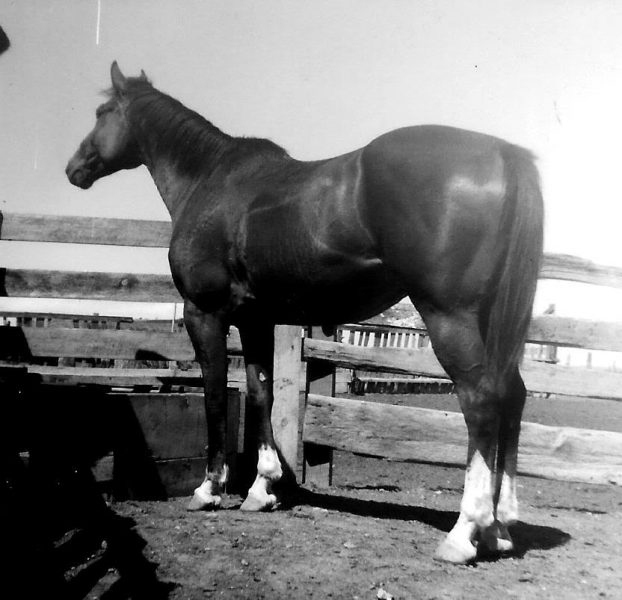 I’ll never forget the big booger. I thought the world of him and it broke my heart when my sister sold him. But, a new little girl got him and was sure mounted on that big guy and they ran barrels, poles and had fun for years after. I’ll bet she never knew, though, just how much horse she was mounted on. But I did.