I have been intrigued with Kinesiology taping for some time, so I reached out to my friend from Wisconsin, Laurel Statz, CVT, CEMT, CEKTP, with Spot On Ranch and Equine Bodywork. Here’s what she had to say about the history of kinesiology taping and using it to improve and heal our horses. 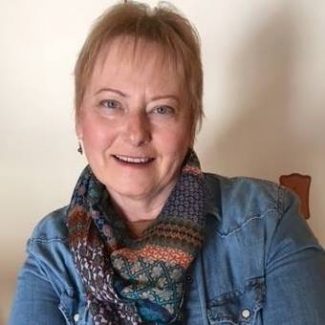 In Laurel’s words: Kinesiology tape has been around since sometime in the 1970s. It was developed in Japan by a Dr. Kenzo Kase. If you’ve ever paid attention to the study of Kinesiology, one of the philosophies is that the brain can heal just about anything, if you allow it to. By casting things, strapping them up with hard tape, immobilizing injuries the brain just gives up since there is no motion there, and healing becomes slower.

​Think about how you don’t see so many hard plaster casts and you see air casts and soft casts used on broken bones. You also don’t see those big old neck braces used on neck injuries and oftentimes see a soft foam neck roll on necks now.

​Kinesiology tape’s first application was in human physical therapy and sports medicine. It works by lifting the skin and creating space under the skin for fluid to move, blood circulation to increase, lymph to drain. The tape is very sticky with the adhesive in a wave pattern which creates a very tiny amount of motion on the skin. Like a micro massage whenever the person or in our case the horse, moves.

From human medicine, some smart person figured out to try it on equine athletes. Sometime after the year 2000 is the time most agree that people started to experiment with kinesio-taping on horses. In 2014 the first tape designed for equines came on the scene. The tape for horses is much stickier than the tape for humans.
​ 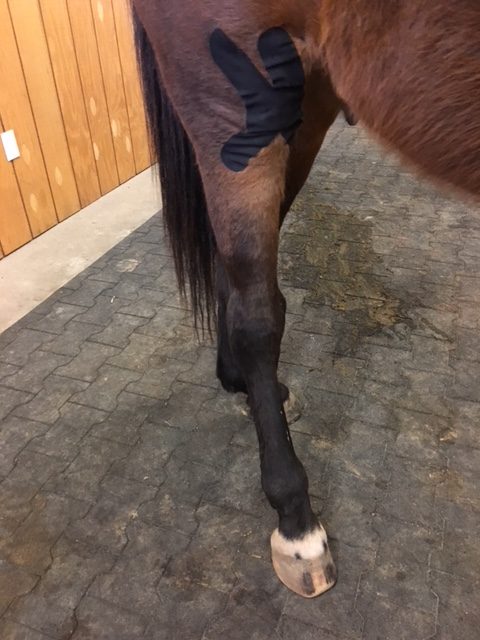 More on the science of it
​When kinesiology tape is applied to the skin or hair of an animal it mechanically decompresses the skin and underlying layers. In animals when it is applied to the hair, it lifts the hair which lifts the skin and accomplishes the same action as in humans. The action of the tape stimulates nerve cells called mechanoreceptors, which are the healing and feel good receptors and it blocks nociceptors which are the pain receptors. The decompression action also increases the space under the skin so that fluid swelling and lymph can move around. It might be just a millimeter or less of space but when you are talking about cells, a millimeter is oceans of space. As the animal moves around with the tape on them, proprioception (the brain’s knowledge of where the body parts are) is enhanced. Proprioception can be altered due to an injury and the tape helps an animal get back to using their body properly.
Kinesiology tape is best used as an enhancement to muscle work in the form of massage.
​
There are 5 types of tapings that are done on horses
• Inflammation Reduction, to improve blood flow or to aid the movement of lymphatic fluid

• Pain Reduction, used on horse that are experiencing pain due to soft tissue injuries

• Support, to give support to joints or muscles during work and beyond. This taping can take the place of sports medicine boots and generally support tapings need to be replaced before each work out. But these can be used in a rehabilitation situation without work.

• Proprioception Taping, (proprioception is the innate knowledge of where all the body parts are). If a horse has no known conditions, but you want to improve their proprioception, to improve performance and decrease the chance of injury during training. This is the taping you might have seen on horses going through a cross country jump course. It is a lot of tape. 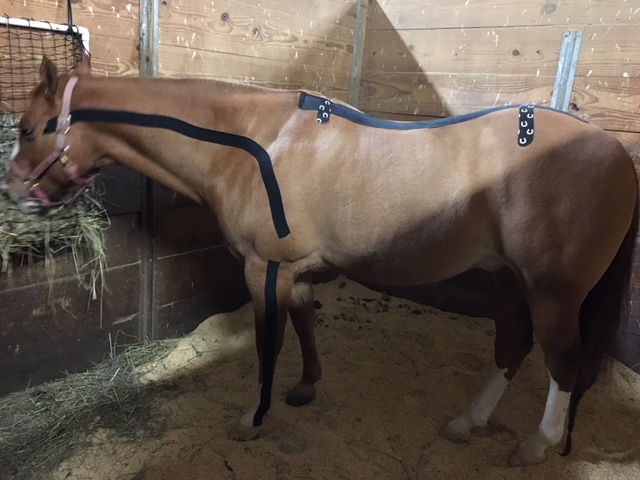 Ringo is a horse that has been a successful barrel racer. His owner, last winter was thinking of retiring him. He was having trouble with his right turn, had sore shoulders, a sore back (but she had just received a new saddle for him that seemed a little bit better) and the beginning stages of navicular in his right front foot. We gave him a good massage and taped him. I applied taping for back pain. Then I applied an energy meridian taping that is good for neck stiffness, forequarter lameness (especially shoulder) and for navicular syndrome. I taught the owner how to apply the energy meridian taping as it is the kind of taping that should be repeated several times and is only left on for 1-3 hours. Ringo is out barrel racing successfully this year.

Paddington (the bay horse in the photo above) had been a very high level dressage horse. He had been laid up for two and a half years from a torn meniscus cartilage (stifle). The Veterinarian orders were to not make him do anything he didn’t volunteer to do and do not ride him. After a good massage and placing a support taping over the stifle, the owner remarked that he was moving in a way he hadn’t in a very long time and when she lead him to the arena he wanted to trot. Because the stifle support taping is in an area with a lot of motion, it needed to replaced after doing any work, due to the tape coming loose with that much movement. I taught the owner how to place the stifle support taping and provided tape for her. The second time I saw Paddington we video taped his moving around and the way he was placing that injured hind leg. She sent the videos to the specialist Veterinarian got approval to ride him. He will never be the horse he used to be, but the owner is just happy to be able to ride him around the farm again. 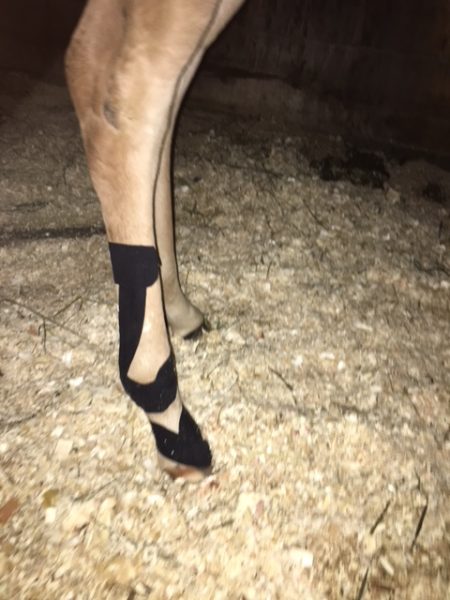 Stormy, a colt of my own, had a rough start in the beginning and about the time he was feeling good, he came home from the pasture, limping. Ultra sound showed some injury to the tendons on the medial side of right hind leg. The day we discovered it, I went ahead and put a support taping on him. The next day when the Vet came out and ultrasounded it, he was already much improved in the way he was walking. The Veterinarian said that she would normally bandage him up. She said that the taping seems to be doing a good job, so keep doing that. I kept him taped for about 10 days. At that point he was putting that foot down very nicely and his activity level was up, making it very hard to keep the tape on, which is how a support taping should go.