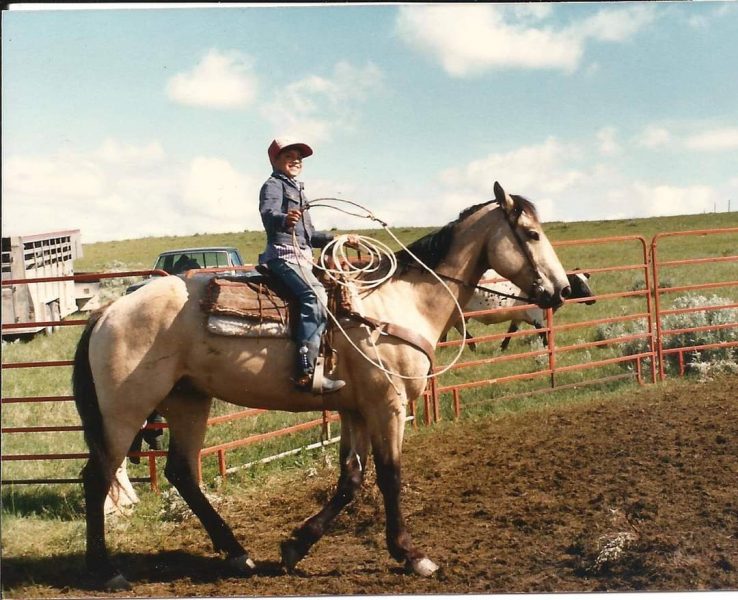 Some horses are just born to be outstanding in certain disciplines. It’s partly disposition and attitude, with aptitude added in. This is the case most particularly with kid horses. Not all horses, no matter how old and broke they get, ever achieve the bulletproof kid horse. Not their fault, just how they are.

We had a neighbor’s branding coming up that coincided with a visit by one of my nephews. Jason was about nine and a ranch raised boy that loved to ride. His folks ran cows but used a calf table instead of dragging calves at branding. He was pretty excited about going to the branding and, of all things, maybe getting to rope!

Since we had no kids yet, our saddle horses were only ever around full grown people. They weren’t ridden by anyone but us either, so introducing a kid into the mix could have been a disaster. We had a really good five year old gelding that was super gentle, a little lazy, but capable of doing any job that came up on the ranch. His name was Tig and he was a leggy 16 hands tall.

We ate breakfast a little before 3 a.m. and he and I headed for the barn to catch horses that had been on hay all night. Needless to say, the May morning was cool and dark. Jason’s saddle was already in the barn, so he got busy getting his spurs on while I went out in the dark corral and caught the horses. As I led Tig up to Jason, Tig stuck his head way up in the air and arched his neck to look down at Jason. Jason tipped his head way back and looked up at Tig. “He sure is tall, Aunt Jan,” he said with wonder in his voice and eyes. Tig snorted softly then sniffed Jason’s head and shoulders, seeming to say “He sure is little.” While they got acquainted with some petting, I saddled Tig up with Jason’s saddle. It looked pretty small on that big horse.

We loaded horses and headed around on the gravel to our neighbor’s branding corrals miles away. Jason was nearly levitating on the seat with excitement. Once there, I bridled Tig and gave Jason a boost up on him, not sure Tig was quite ready for a kid crawling up his leg to mount at that point.

He rode him around a bit before the crew headed off at a long trot to gather in the predawn light.

Cows were gathered easily and the branding started. When the neighbor asked Jason if he wanted to rope, the grin went from ear to ear. Jason was paired with a fine older cowboy named Howard who wouldn’t get anyone in a wreck. Tig had dragged a lot of calves at brandings, so knew a lot more about it than Jason did.

The calves were big, soggy Charolais cross that were active and quick. Jason had gotten into the swing of things and was dragging some calves to the fire. He was having a great time and Tig was doing his job as well.

Jason had caught a bigger calf a little high and flanked him with the loop and that calf took off bucking like a rodeo bull! He went around Tig so fast that it caught Tig by surprise, as well as Jason, who had dallied and was started to the fire. The calf was bucking high enough that the rope went up in the air, flipped up over Tig’s rump, and went under the saddle blanket and saddle clear to the single rigging on that little saddle, binding Jason’s leg to his rig. Howard was trying to hurry his horse to Jason without running the other calves into the mix. The ground crew also started to him, but had to get through the calves too. I saw in my mind’s eye a terrible wreck happening but couldn’t get there either. Jason wasn’t experienced enough to know to jerk his dallies, so was just stuck.

Tig calmly assessed the situation and in spite of the stinging of the rope over his back with the continuing jerking by the calf, made a decision. He carefully turned to the right and unwound the calf, who by this time was nearly in front of him, and as the rope slid out from under the saddle and slid off his butt, he headed to the branding fire. He didn’t act like it was any big deal and that he’d been in that situation a hundred times. Jason’s eyes were big and you could nearly hear the pounding hearts of all the people who’d seen it. Tig was not concerned in the least, just doing his job.

Howard rode over to make sure all was well and said “That’s the brokest horse I’ve ever seen. He’s worth a million!” The ground crew were sure relieved, and I was nearly limp with reaction. It could have been a terrible wreck with a badly hurt little boy and myriad other possibilities.

But, a natural born kid horse saved the day and made a wonderful memory for my nephew. Jason remarked recently what a great day that was and that he’d never forget it. I don’t think he truly understood as a child just how close he came to having a life altering wreck, but almost 40 years later, he probably does! Tig might not seem quite so tall now either.