Just What the Doc Ordered

A very special horse is among the 2022 inductees in the Casey Tibbs Foundation.

Captain’s Darkie, “Doc”, owned by the Steffes family and ridden by sisters Nikki Steffes Hansen and Kristi Steffes, is recognized as one of the greats.

The Steffes family purchased the horse from Malcom and Nola Price of Wasta, S.D. as a five-year-old, a potential all-around horse, requiring more training and seasoning, for the girls.

The horse has a list of winnings that is “really amazing,” Nikki said. “My mom kept a record of the stuff we won on him, me and my sister. He won at least ten horse of the year honors. Looking back through his list of accomplishments is amazing.” 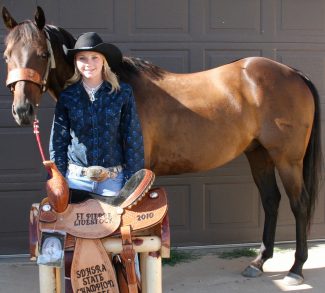 “I remember I won it (the pickup),” Nikki said, “and the first day of school was the next day, so I drove the pickup to school.” 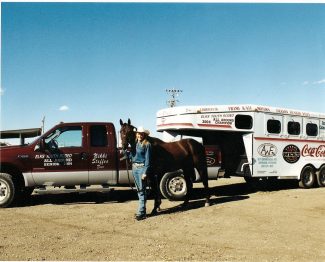 On Doc, Nikki won the pickup and the trailer, given away by the Sheridan (Wyo.) Elks Youth Rodeo in 2004. Photo courtesy Hansen. 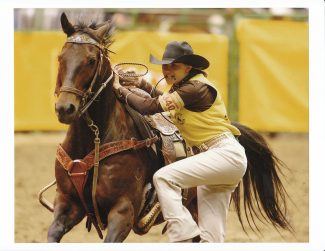 “I couldn’t practice on him in the goats at home,” she remembers. “It was almost like he was too important to practice. He would just goof off. I would step off him and he would accelerate.” It was the same in the pole bending. “I could do slow work on him, but trying to make him run fast was a no-deal.”

Kristi, who is seven years younger than Nikki, rode Doc as well for her high school years.

“She and Doc had a really amazing bond,” Nikki said. On Doc, Kristi won the state high school title in the poles and barrels twice, and the all-around twice (2010-11). Together, they qualified for the National High School Finals all four years.

And Kristi won the pickup at the Sheridan Elks Youth Rodeo in 2010, for high point winner in the senior division.

The “beautiful bay” had a sixth sense about him, Nikki said.

“He was just a champion and a winner, so kind.”

Doc took care of his riders, no matter who they were. Nikki remembers a high school friend, a rodeo competitor but not as experienced. When the friend came to the Steffes’ house, her favorite thing to do was to ride Doc.

“You’d think that he would maybe not be a good ride for inexperienced riders, but he took care of her.”

Doc passed away in 2015 after colicking.

Nikki had always hoped that he would be her kids’ first horse.

“He had such a huge heart. It’s like he loved his people as much as we loved him.

“There couldn’t have been a better horse for us to grow up on.” 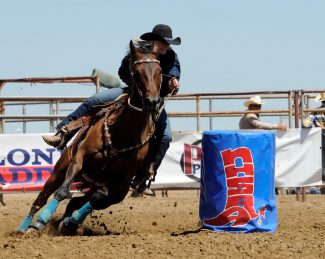 Kristi on Doc at the 2010 National High School Finals. 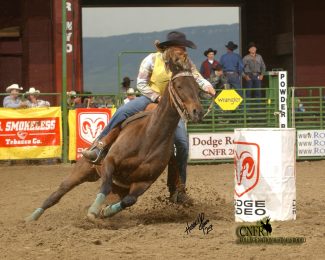 Nikki aboard Doc at the 2007 College National Finals. Photo by Hubbell