Joe Hancock: How the Legend Began

The Hancock line of horses is one of the lines that have had a huge impact on using horses for nearly a century. People either love them or hate them, and they aren’t everyone’s cup of tea, so to speak. But, they are sure stout, tough, sound horses and they’ll be around for a long time. Where old Joe Hancock came from though, isn’t something that everyone knows, so this is about him and his background.

John Jackson Hancock was the man who bred Joe Hancock on his panhandle ranch south of Perryton, Texas. He ran a band of 35-40 broodmares, one of which was a breedy type of mare thought to be of Steeldust lineage. She was very Thoroughbred in appearance and was known as the Mundell Mare, as she had been purchased from a racehorse man by the name of Mundell. She was to become the maternal granddam of Joe Hancock.

Though John Jackson Hancock had possession of the then 15 year old John Wilkens, he chose not to breed the Mundell mare to his own horse, but took her to a neighbor’s stallion instead. This stallion was a black horse standing about 14.3 hands and weighing around 1100 pounds. He was owned by Ralph Wilson and was his personal saddle horse, plus he was match raced very successfully. The Wilson horse was a purebred Percheron, though not of the draft type that we think of today.

So, the Mundell mare and several other Hancock owned mares had foals by the Percheron stud of Wilson’s. The Mundell mare’s foal was a filly who was cleverly named the Hancock mare. When she got older, she was bred to John Wilkens. The resulting foal was Joe Hancock. His birth date was either 1923 or 1925, and whichever date it was, a great family line of horses was born.

The yet unnamed colt was a yearling the first time that Joe David Hancock, son of John J., saw him on pasture. The youngster had a wire cut so Joe David stayed on at his folks place to doctor the colt for a few weeks. He lived over 300 miles away and was back for a family reunion. When he finally returned to his home, he had traded for the yearling colt and hauled him back to Nocona, Texas in a borrowed trailer.

When he got him home, he turned him out on pasture. He soon discovered that the colt had covered a mare and she was in foal. The resulting filly was named Winnie Mae and eventually became the foundation for Joe David’s broodmare band. But that’s getting ahead of our story.

Joe David probably decided that keeping a stud colt around was a hassle, so he had a vet lined up to cut him. A friend came by the same day and along with the vet, questioned the wisdom of gelding such a good looking colt. Joe David bowed to their arguments and left him a stud, much to the relief of all the folks that have ever rode and liked a Hancock horse.

So, instead of getting gelded, the colt was sent to the racetrack to see what he could do. Hancock sent him to his uncle Bird Ogle for training and when entering the colt in his first race, he had to come up with a name. He said he belonged to Joe Hancock and that’s the name that stuck, hence a whole line of horses came to be.

Joe Hancock scorched the tracks and ran against all comers. His soundness and gentle, calm disposition was attributed to the Percheron blood in him, as well as his phenomenal appetite. He was a consistent runner, winning up to a half mile. By the time there were no more challengers, he had run for a half dozen years and stood open to the world for 3/8 of a mile. 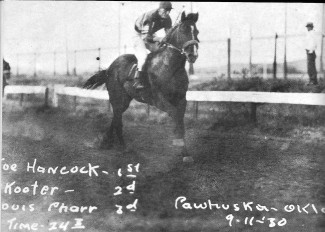 This rare photo of Joe Hancock winning a race shows that he wasn’t being pushed to daylight some of the big runners of his day. 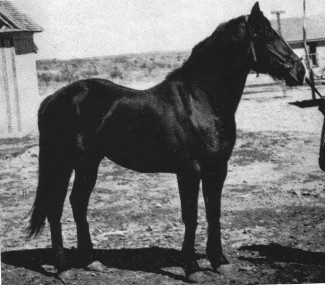 This photo is of a mature Joe Hancock when he was on the Burnett Ranch. It shows the substance, bone and hip that he possessed and passed on to his offspring. (photo from AQHA stud book)

After Joe was taken home to the ranch, an unheard of price of $1000 was put on him. This was an absolute fortune during the depression, but a buyer came along and paid it eagerly. He in turn sold him to Tom Burnett of the 6666/Triangle Ranches.

He lived out his days on those ranches, siring horses that could not only run, but were tremendous ranch and rope horses. When Joe was 20 years old, he had to be put down due to acute laminitis brought on by complications from a bad wire cut that caused him to founder.

Joe’s story doesn’t end there, though. His legacy lives on through the good horses carrying his blood. He is famous for the line of exceptional race and rope horses, such as his sons Roan Hancock, Red Man, Baldy Joe, War Chief, Joe Hancock Jr., Little Joe The Wrangler, Joe Tom, Buck Hancock, Texas Blue Bonnet and many more.

His daughters were also dynasty builders with Joan, the dam of Steel Bars and Hot Heels, Mrs. Ogles, dam of Moon Hancock, Julie W, dam of Lena Horn and the full sisters Flit and Juleo, who in produced King’s Pistol and Otoe, respectively.

The conformational soundness and solid minds of the Joe Hancock horses have stayed consistent through the skilled breeders who have carried on the line. He will never be forgotten and was inducted into the AQHA Hall of Fame in 1992. Not bad for a big colt out of a half Percheron mare.