How To Treat A Rattlesnake Bite

Rattlesnakes are a fact of life out West, just like droughts, John Wayne movies, and beautiful sunsets. Many cowboys and equestrians encounter poisonous snakes and other wildlife when riding outside, but not all know how to properly treat themselves or a companion if bitten by one of these potentially deadly reptiles.

The Center for Disease Control (CDC) estimates that between 7,000-8,000 people are bitten by rattlesnakes each year in the United States. Of those bitten, about 5 will die. More would likely die if they didn’t seek medical treatment. Disability or permanent injury, such as the loss of part or all of a finger, are much more common.

So, what should you do if you’re working or recreating in the great outdoors of the American West and are bitten by a rattler? Whatever you do, do NOT pull a John Wayne and cut the wound, then try to suck the venom out. You should not apply a tourniquet, nor drink alcohol or caffeine. Do not pick up the snake. Do not wait and see what happens.

To recap: No cutting off the bottom of your shirt, tying it around your snake-bit leg, then drinking a Long Island Iced Tea while petting your new snake friend.

If bitten by a rattlesnake, experts say the first thing to do is stay calm. Resist the urge to run in place or perform jumping jacks. If you’re in cell phone service, dial 911. Lay or sit down with the bite below the level of your heart. Wash the bite with soap and water – if available – and cover with a clean, dry dressing. For detailed information about treating snake bites, visit the CDC’s website.

Then, get your snake-bitten self to the nearest emergency room, because antivenom provided by medical professionals is the only cure. Snake bite kits which claim to include antivenom and can be purchased online should not be trusted. If a snakebite victim gets to a hospital in time to receive the antivenom (which hopefully is in stock at that facility), there is a nearly 100% survival rate.

While a nearly surefire cure, antivenom is only slightly less rare than hen’s teeth. Each dose costs thousands of dollars, partly due to the lengthy and crazy-complicated process used to make antivenom. Quick summary: Snakes are milked, livestock is injected, then blood is harvested through the jugular vein. It sounds like medieval witchcraft, but it is a highly scientific process used to eventually save a human life.

Educating yourself about how to treat venomous snake bites can save a life, whether it is yours or somebody else’s. Kathy Bengoa, who ranches with her husband in northern Nevada, recounts this harrowing tale:

Our hired man was bitten by a rattlesnake a few days ago. He was getting ready to bale [hay] and turned over a windrow to check the moisture, and the snake was in it. It wrapped around his arm and bit him on the underside of the wrist. Luckily, it was not a severe bite. The fang marks were clear, but not deep enough to draw blood. He came straight to the house and we got ice on it and had him to the hospital within an hour. I called ahead so the emergency room was ready for him. By the time he got there, his arm was starting to swell to the shoulder and his throat was getting tight. The first thing the emergency room did was give him Benadryl.

Apparently, antivenom must be received within 4 hours of the snakebite, but the immediate threat is swelling and death of tissue, which was treated with the Benadryl. The swelling in his arm and throat started going down right away. The antivenom medicine had to be prepared and was not ready for a couple of hours. He ended up getting two doses of antivenom and spent the night in the hospital, where they drew blood every three hours, but came home healthy the next day and went back to work. 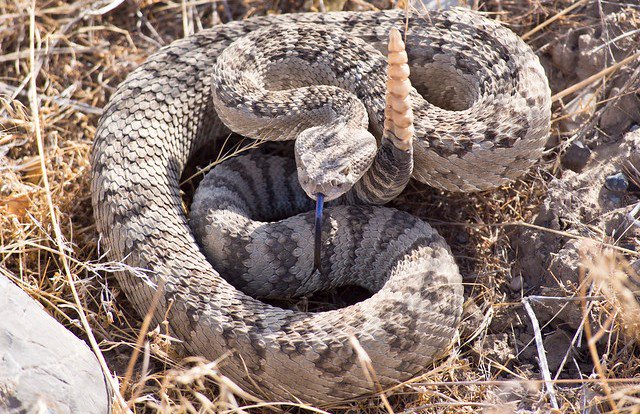 I hope nobody gets bitten by a rattlesnake this summer, but if you’re going to frequent their territory, it’s good to arm yourself with some knowledge. If all goes well, you won’t need antivenom; you can just unsaddle your horse at the end of your ride and drink a Long Island Iced Tea – without a new snake friend.