How to Pick a Horse of a Lifetime

This is an old family story about how my Dad chose the horse that became his “horse of a lifetime”. It occurred the year before I was born, but I know it by heart because of Dad telling it over the years.

When my folks were still in the family partnership, my Grandad had a very good buckskin stud, Mack, that he rode and used for everything. Having that good stud and there being a market for weanlings, the ranch ran a small band of Thoroughbred type mares. They were a good cross with the stud and the colts were sold easily. It didn’t hurt that they were predominately palominos and buckskins.

The fall of 1960, my Dad decided to keep a colt. The freshly weaned crop was haltered and tied to posts along the wall inside the barn. Each day they were tied up and handled a bit, then turned loose for the night. The colt my Dad had picked he named Cotton as he was a light palomino. A good looking colt, he was hard to handle and was making work out of halter breaking and learning to stand tied. But, Dad liked his looks and kept at it. In this same bunch of colts was a buckskin colt that was so homely that Grandad had said that it was a waste of time to halter break him. But, he’d gotten haltered and tied up anyway. He was a little Roman nosed, was narrow gauged and a little light behind. Nothing at all remarkable about him other than that he had color.

The barn they were tied up in had several compartments in it, plus the area where the stanchion was for the milk cows, and a “shop” area at the entrance. On the evening in this story, my Dad was milking ol’ Betsy in the milk pen. My brother Bob, age five, was carrying his bucket around gathering eggs that Mom’s feral chickens laid everywhere but the chicken house.

Bob was in a hurry and was racing through the barn to get the eggs gathered. He tore through past Dad and out into the main area of the barn before Dad could stop him. He was running pretty fast for a five year old when he turned left through the gate and ran smack dab into the hind end of the homely buckskin colt. Dad hadn’t had time to do more than gasp when this happened. The colt humped his back and froze in place with Bob nearly wedged between his hind legs. Every other colt in the whole barn had pulled back, some fell down, and Dad’s Cotton colt pulled back and threw himself several times, even though he was on the far end of the barn.

My brother had frozen, knowing he was in a bad spot. Dad talked him out of the predicament he was in, hoping earnestly that the homely colt wouldn’t kick. As Bob cleared the colt’s range, the colt hopped over by the wall, turned his head to see Bob and snorted loudly. I’ll nearly bet Bob got a swat on the butt for running through the barn, but the colt hadn’t harmed a hair on his head.

That night, as the story goes, Dad told Mom what had happened and that he’d decided to change colts and keep the sensible, homely colt. He named him Reno. He never regretted it a day of Reno’s life as besides being Dad’s top horse, he also packed all of us at different stages of his life, from ranch to rodeo arena.

Looks aren’t everything, but he did grow into his head and fill out. We all thought he was beautiful anyway and they just didn’t get any better than Reno. He turned out to be the horse of a lifetime 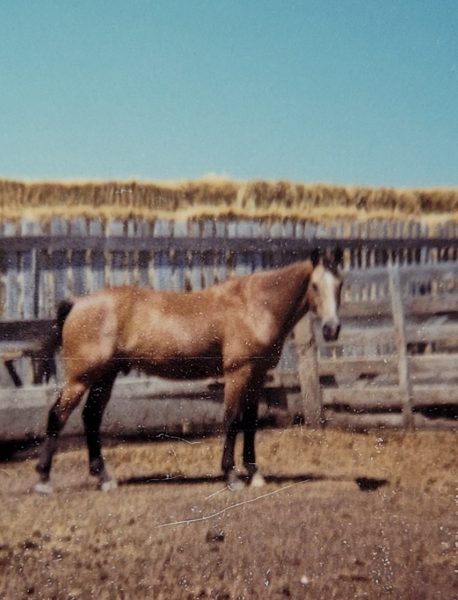 Reno in his later years was a handsome horse.