I was working that fall and winter for a ranch about 25 miles from where I lived. My horses were kept at the ranch, but there was no accomodations for me, so I had a little house in town. Not ideal, but it worked. My dear friend Uncle Paul, who wasn’t my uncle but I’d always called him that, had called my boss and asked to borrow me for a day to do some riding for him. My boss told me to take my saddle with me when I went home as Uncle Paul needed me the next day.
It was January, colder than the dickens, and I wasn’t very keen on taking my saddle along to put on one of Uncle Paul’s horses. I wasn’t a craven coward, mind you, but Uncle Paul had a bucking string so one never knew if one of his horses would be in the barebacks, saddle broncs, or being used to pick up broncs. Needless to say, my excitement was not high over the prospects.
Early the next morning, I put on my daily layers of clothes, took some extra, and went to meet Uncle Paul at his place. Uncle Paul was badly crippled up and could hardly get around, but he had already caught my horse for the day and had him tied up. It was somewhat reassuring that he didn’t have a number branded on his hip, but the horse was fat, shiny and fresh. I saddled him up and he stood nice, but his steps were pretty short when I led him off. He never did anything though, so I led him up the chute and into the bobtail truck we were taking and tied him up front.
When I climbed in the cab, Uncle Paul asked me what I thought of him. I told him he was a nice looking horse and waited. He explained that he had just traded for him and didn’t know anything other than that he was supposed to be broke. Gosh. What a relief. He was supposed to be broke.
As we made the journey up into the heart of the Black Hills, Uncle Paul told me that some hunters had spotted some of his cows that had been hiding out in the fall gather and that we were going to go get them. The springs had finally all frozen up and the old renegades and their big calves had shown up back on the right allotment and in the trap by the pens, so the hunters had shut the gate on them.
It had been snowy up in the Hills, but then there’d been a warm spell and melted some of the snow, then refroze so that the high country was absolutely glazed with ice. When we pulled into the set of corrals where we were going to load them, we could see the cows off in the distance, standing back on the backside of the trap watching. I had to hang onto the truck and the chute to even stand up. Uncle Paul did the same though I told him to stay in the truck so he didn’t fall. He listened about like usual and crept along on the ice. As I was leading the gelding down the chute I glanced over at the cows and saw one of the calves fall flat on its side when it tried to turn too quick. That didn’t reassure me much.
The idea of getting on a horse I didn’t know, wearing everything I owned since it was a blistering 10 above out, on solid ice excited me to no end. Riding said unknown horse out around some high headed cows to try to ease them into the pens didn’t add to it.
I cinched him up, put the bridle Paul had brought on him, and lead him around as best I could without falling. Uncle Paul growled “Just get on the sumbitch before you fall and break your neck” and I growled back at him. Finally, feeling that the horse was limbered up, I stepped on him pretty easy, careful to not drag a foot over his butt or anything. I got myself set, just my toes in my stirrups in case he fell, and asked him to step out.
Darned if he didn’t ride right off like a broke horse. Who would have guessed? He took short steps and hustled right out after I opened the gate into the trap. He was being very cautious on that ice and was tuned in to the cattle in the trap. They saw us coming, decided that winter was going to kill them on the mountain, and almost came to meet us, slow and easy. We moved in behind them and carefully eased them on to the corral and into the pen with the loading chute. The cows and calves slipped and slid a bit, but that sorrel horse never misplaced a foot. He even worked the gate so I could shut it without getting off of him. 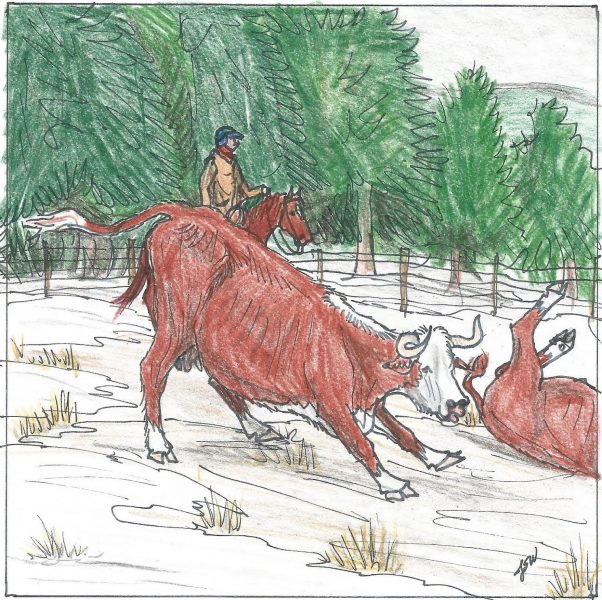 Uncle Paul was grinning when I had them in the pen. He had me load the horse in the front and then the cows and calves. I was liking this nice gelding pretty well by then and was a little concerned that those horned cows might poke a hole in him. I tied my stirrups up so they couldn’t hang a horn in one, then slipped and slid back down the chute and brought the cows around. They were ready to go home and never argued about loading. I managed to not fall down and chained the gate on the bobtail, glad to be done with that gut wrenching ride on the ice.

On the way off the mountain, there was a scuffle in the back, so we stopped at a pulloff to check our load. That nice horse had taught those cows to stand in the back half of the truck and not poke him with a horn. There was a hoof track or two on a couple of cows to show he meant it too.
Try as I might, I couldn’t talk Uncle Paul into letting me just keep that sorrel horse. He was darned sure a nice horse that day. Could be he was just as puckered up about the ice as I was and wouldn’t try anything, but I like to think that he was actually an honest horse. Plus, he didn’t have a number brand on his hip!